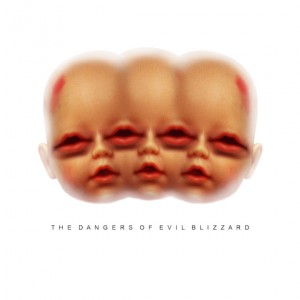 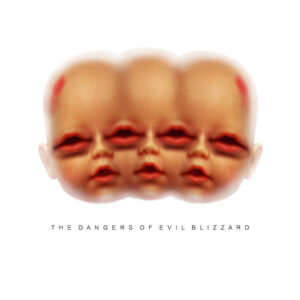 Ever since I experienced Evil Blizzard’s live onslaught last February at Bristol’s Cube Cinema (live review here) their sound and bizarre image has left an indelible mark on my psyche. Finally in possession of their debut album, it’s time to get to grips with these northern tearaways as they metaphorically stick screwdrivers in your ears.

What is evident here is they want to raise the hairs on the back of your neck by any means possible. Feed The Flames begins proceedings with the in your face production pushing their destroyingly doomy riff all the way into your cranium. Drummer and vocalist, Mark Whiteside’s vocals hook your attention with piercing precision; Part INTERPOL, part P.I.L, the perfect counterfoil to the careening, rumbling basses (four, yes count them!) that form the foundation of all their songs. Even without the live visual stimulus they are gaining quite a reputation as their music forms psychedelic visions in the mind of the listener, thanks partly to the array of effects each bassist has at their disposal, but also because these songs are seriously catchy as fuck!

Clones is the catchiest of them all, like a twisted, meth-infected My Sharona. A critical statement on modern culture? Definitely, and it’s funny because it rings so true. If it doesn’t get you jumping up and down singing,

Sleep begins like that moment of trippy reality when we fall into a slumber, entering an astral plain of existence where “dreams become reality,” before tormenting us awake with a start akin to a heart attack. (Open Up The) Red Box, with it’s incessant single riff and repeated title vocal refrain, drills a sinkhole sized hole in your consciousness until…wammo! The screeching feedback and driving beat don’t let up and all hell breaks loose. A heart pounding song that leaves the listener feeling like a wet rag, exhausted by their efforts.

P.U.N.I.S.H.M.E.N.T finds them caught in a sado-masochistic scenario whilst the bass melody gets me chicken dancing like it’s 1986. Musically similar to the pre-goth days of the Southern Death Cult the soaring vocals tell a perverted tale of wounding and flaying to ecstatic ejaculation. Evil Blizzard’s ability is to compound a riff so intensely that it breaks free of any constraints to bludgeon the living daylights out of the speakers and your ears … but in a good way!

Slimy Creatures is one of the more throwaway tracks on the album. Even so, it has a great feel to it with the riff jumping around like a psychotic frog on heat.

Closing track, Whalebomb, is one hell of an experiemental twenty minute epic psych out. A nonsensical sonic journey that at the nine minute mark takes off for the stars of Jupiter on the coat tails of Hawkwind’s unique influence. Their wah-wah pedal sure does gets a good shoeing on this one, up until the fourteen minute mark at which proceedings are slowed down to a doomed, fucked up finale they’ve been threatening throughout.

A tour de force of an album in which a world of worryingly freaky things and sounds are created. A funhouse of spooky, heavy duty psychedelic rock and roll where the listener is party to the beautifully cacophonous noise of heavy pounding drums, with more rumbling bass frequencies and freaky effects you can shake and tweak a doll baby’s head theremin at.

These inventive musical scallywags want to mess with your head a little bit and it seems their evil work is about to infect the masses. A dangerous bunch this, keep your eyes on them.