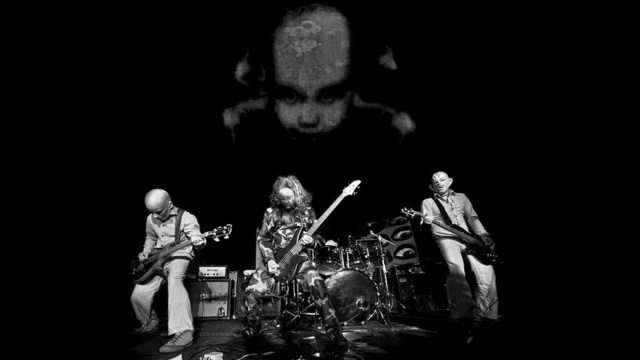 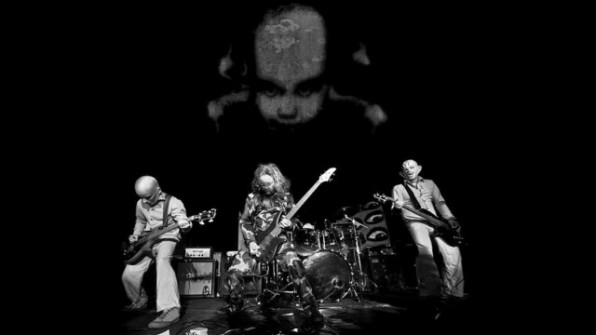 Last Saturday it was Bristol’s turn to feel the force of the mighty Evil Blizzard as they took to the stage at The Cube Microplex and properly blew minds during a “Night Of The Living Bassheads”.

I feel as if I am entering into the heart of darkness as the guy on the door stamps my hand. The damned and the despised congregate inside this inferno, seeking refuge in the underworld from the torment of eternal damnation. A vision of the circles of Hell appears before me in the foyer and our ‘Virgil’ guides this evening are Evil Blizzard. Preston’s finest and fast rising horsemen of a four bass guitar hammer attack. Here tonight to re-score Benjamin Christensen’s ‘Häxan’, a 1922 Swedish made ode to witchcraft and the esoteric.

Chatting to the lads pre-gig, they try to tempt me with alcohol to influence the outcome of the review, and it seems that one beer was all it took to corrupt my soul. Not that it made a blind bit of difference really, I was converted long ago when I witnessed disturbing viral videos of their earliest shows.

Support band, Super Fast Girlie Show, stoke the fires with their two bass, no guitars attack team. A three piece boasting ex-members of Liverpudlian 90’s Indie breakthroughs, Space. SFGS sound nothing like them and shift the gears into overdrive with a terrifyingly tight set of propulsive brain-munching tunes. Something like Motorhead pile-driving Nirvana and Jesus Lizard. A carnival of freaky fx’s cushion the blow of their violence, but by the end, my geek love brissles for them. An absolutely thrilling live band who have the intent and vision of a pissed off Cyclops.

Evil Blizzard begin to fill the stage one by one, casting sonic spells as the film plays behind them. It is a superb vision of weirdness, so engrossing that the film merely becomes a moving backdrop to the physical presence of the band. Every available space in the auditorium is filled with heathens, ripe for annihilation. The band tears auditory abstractions from the ether as the devil’s business plays out behind them. This ironic re-scoring of what is essentially a silent movie takes centre stage with these creative psychopaths adding bass upon bass to the onslaught.

Craniums begin to crack under the pressure of the intense experience. Those who came to see the film and not the band seem to be feeling the strain. There is little relief during the whole process. All members of the Evil Blizzard are wearing eye-melting masks and decidedly camp clothing. A divine comedy that summons the spirit of Hawkwind with their tripped out frequencies; There is a pink tranny skinhead teasing sensations from his fx pedal board. A pastel suited old guy alternating between thumping a keyboard and his pink flying-v bass. A bass welding leather clad rapist menaces the audience with a dolls head in his loins. The boiler suited psycho bassist forms a truly terrifying rhythm section with the deranged and insanely talented drummer. ‘Pigman’ makes an appearance mid set, welding a meat cleaver and a truly terrifying smile. They say seeing is to believe and it is quite a sight.

It is a perverted jaw-dropping sight to behold this band in full swing. My creeping flesh is tempered only by the obvious campness of it all. You have to laugh, otherwise you’ll cry. The movie ends behind them as their set continues and I have to say, I didn’t care much for it. It paled in comparison to Evil Blizzard’s intoxicating wrath. Unconvinced battle worn patrons leave the room for their own sanity, whilst the die-hard spellbound mentalists like me, prepare for part two of the band’s decent to Hell, after a short toilet break.

Bowels evacuated and whiskey in hand to settle the nerves, part two descends into chaos pretty quickly as Pigman chooses a few (un)lucky fans to assist in the melange. A hatchet makes the perfect drumstick for one crazy lady, whilst a baby head Theremin is presented to the audience to kiss and caress. The bass instruments are passed into the audience to be fondled until no one is left on stage yet the noise continues. A rather drunk girl, insanely dances as lasers flicker and twist upon it, hoisting aloft a cardboard cut out of a bespecktacled old man’s face.

Despite the chaos and noise, Evil Blizzard’s set contains some incredibly musical moments with tracks off their debut album (available here). To underestimate this band would be a mistake, as their weirdo antics and sonic ritual are merely the demonic façade to some great song writing. Their package is utterly awe-inspiring and shockingly refreshing considering how played to death the whole mask-wearing thing has become over the years, since Mr Bungle and Slipknot nailed it to the wall.

This is a band that cannot be ignored, and if you do so, you do so at your own peril. Your souls are already the corrupted products of corporate co-opted culture, so what’s the point in resisting? At least these independent and creative souls are more entertaining and significant than all the celebrity ‘A’ hole and ‘Z’ listers we all love to loathe. Give them your money, atone and buy their album. Give them your attention! If Rock truly can save souls, these are the men for the job.

As William Blake so rightly put in his poem, ‘Milton’,

‘Mark well my words; they are of your eternal salvation!’

Evil Blizzard can be found on Facebook and Bandcamp. You can buy their latest album, out on our own label, from this link.