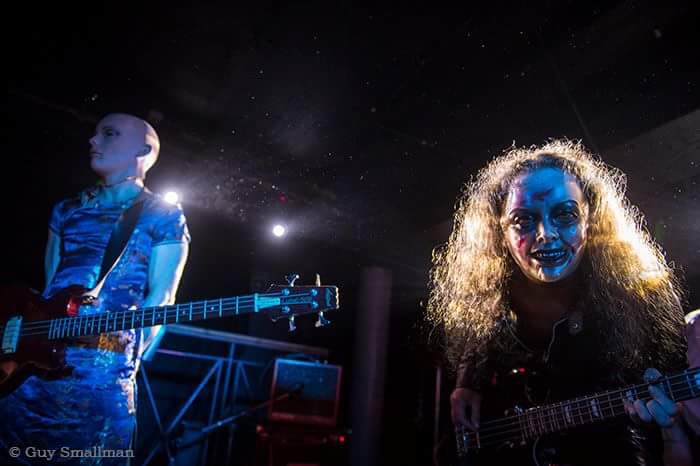 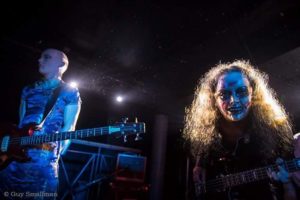 Evil Blizzard are on tour and also play the major Manchester gig at the Ritz with Membranes, Brix and the Extricated, the Nightingales, Dub Sex and the Blinders. Tickets available from wegottickets.

The Underworld is heaving. The crowd have been nicely warmed up by support acts Taman Shud & The Fierce and the Dead and I’m squished in between an enormous dude in a onesie sporting a creepy baby mask and a wicker man type horse thing. I’m tempted to ask man-baby if he is wearing a real nappy under the outfit but think better of it. None of this is out of place at a gig by Evil Blizzard but something feels a bit different about their latest visit to the (now officially poisonous) smog.

It is their biggest London headline show to date and the demographic of their fucked-up throng seems to have expanded downwards in age and sideways in diversity. Previous shows in smaller venues have been packed out by the band’s famously obsessive following but they now seem to have broken out of the ‘best kept secret’ status and seem to be on the cusp of something bigger.

When the rubbery clan finally emerge to a chorus of loyal booing and tear into ‘Hello’ the places explodes and continues to go seven shades of mental long before second song ‘Sacrifice’ reaches its crescendo.

The tempo comes down slightly for the preposterous anthem that is ‘Feed the flames’ but the mayhem abruptly starts again as the track breaks into its tribal drum frenzy with all the players intertwining their parts to glorious effect.

If four bass players and a singing drummer sound like a gimmick the live experience proves that the Blizz are anything but. They churn out a definable multi layered sound that genuinely pushes the boundaries of what we have come to expect from a rock gig. For all the posing the precision is commendable. Each of them uses enough effects peddles to start a small business and they must truly be every soundman’s greatest challenge or worst nightmare.

Filthy Dirty briefly assumes lead vocals for ‘Unleash the misery’, which is the closest they come to having any kind of front man/thing.

This is a band who clearly decided that guitarists, lead vocalists and their accompanying egos are surplus to requirements and they are all the better for it. The dark psychedelic tunes produced by this orchestral rhythm section are the work of musicians who create sounds from the bass guitar that previously seemed impossible. While at the same time keeping themselves in check with each other.

‘Sleep’ reminds us that they also appreciate the concept of less is more as the spacious tune gives the now very sweaty crowd a well earned breather along with an opportunity to fully appreciate the beautifully sinister, threadbare vocals of Side.

I am just beginning to wonder when they will deliver some new material when we get ‘Fast forward Rewind’. A brand new satanic-carol, which manages to be instantly memorable and gets greeted like an old favorite on the dance floor by the loyal congregation.

From here on chaos reigns as the masked ensemble tears through the pounding pulse of ‘Slimy creatures’, the dark surf anthem that is ‘Are you evil’ and the final manic insanity of ‘Red box’. By the end the stage invasion is complete and includes several groupies, a shopping trolly, two more bass players and a man-dustbin (of course).

The following day a reflective Pedro (aka Filthy Dirty) tells me:

“London gigs are notoriously subdued but last night was a riot. It’s always the crowd that makes a Blizzard gig and last night was exactly that…. to have a proper mosh pit in the Underworld takes some beating.”

” Hopefully we’ll be recording the album in autumn for an early 2018 release which seems a long time off but we’d rather do that than just release something crap for the sake of it.”

Evil Blizzard will be cremating Bristol on February 11th. Liverpool & Preston in April and then returning to London as part of the RAW POWER festival line up in May.

Go and see them. Your nightmares will be all the better for it. 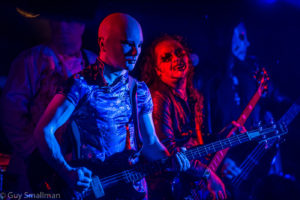 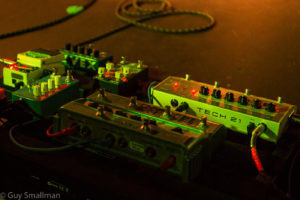 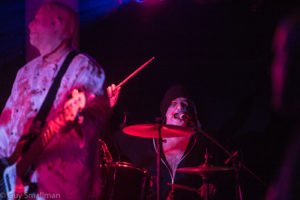 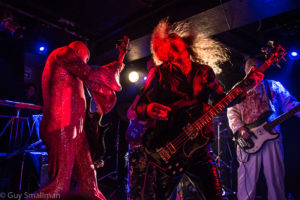