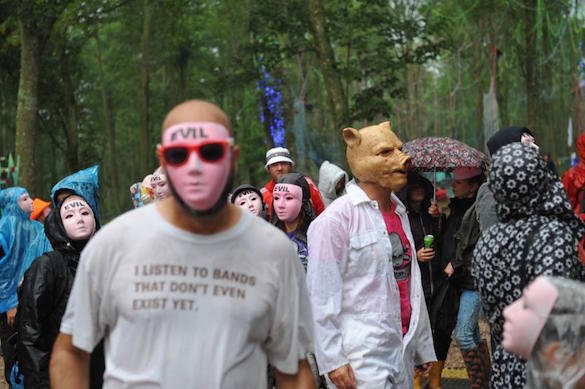 Photo above of the Evil Blizzard audience © @martsharm whose Flickr is here.

Evil Blizzard took their stonking, legendary and inimitable live show up to Kendal Calling last week to entertain the good people there. Below, Alizon Brunning reviews their set for us.

Kendal Calling’s Woodland stage has a twee fairytale feel to it: the log cabin bar, the rustic picnic benches and the stage made out of sticks. Then the band arrived to blow the house down: ‘We are Evil Blizzard and we are here to ruin your afternoon.’ The tale turned grim. The carny had rocked up and things were about to take a disturbing turn.

Bassist FilthyDirty strutted out in a powder blue suit and pink dress shirt, partly fifties lounge-lizard, partly geriatric Swiss Tony, but with a head like a warty alien from a bad dream. The other three bass players each brought their comic book character: Funland meets Freakshow. Kav, an androgynous pink baby doll; sinister Prowler pouting and posturing in glamrock biker chic and Stomper menacingly solid in blue boiler suit. At the back singer/drummer Side took to the kit in silver lurex leggings. 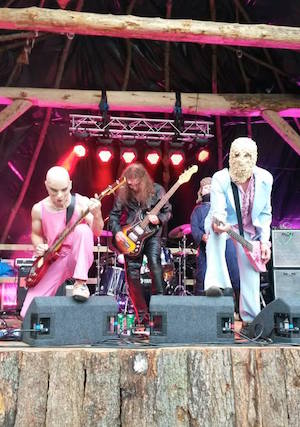 This is theatre. But don’t be fooled into thinking that it’s style over substance. The music and the showmanship are integral. The band can play. They gave us six tracks, four of them off the new album The Dangers of Evil Blizzard out on the Louder than War label. The band kicked off with ‘Sacrifice’ and the sound was physical; belly, knees, throat felt the full force of the layered bass underpinned by Side’s relentless drumbeats and nagging insistent Lydon inspired vocals.

It’s not all doom-laden noise though, Kav’s pedal effects chase round like a demented fruit machine on a winning streak. There’s a plaintive mournfulness to some of the songs too; a haunting nightmarish quality. On ‘Sleep’ childish prayers, ‘gentle Jesus meek and mild look upon this little child,’ are mixed with chants of ‘Let me sleep’ from an otherworldly insomniac.

Comedy and danger form an uneasy fusion when clown horns morph into wailing sirens on ‘Feed the Flames.’ The final assault comes in the terrible beauty of ‘Whale Bomb’ where sonic oceanic echoes twist into high-pitched squeals and deep monstrous growls. And maybe I had been hypnotised, but somewhere in the set I swear I heard strains of Strangers in the Night as if drifting from a French fairground under enemy fire.

It was during the track ‘You are Evil’ that the full-on hallucinatory impact of the band hit me. Blizz Pig, the band’s porcine carnival jester, had trotted into the crowd with a set of mannequin masks. A woman in front of me pushed hers to the back of her head behind her plastic rainhood. Through the strobing rain I saw a suffocating corpse dancing. I turned to see three children bouncing on a climbing frame. Their faces revolved slowly towards me: pale blank masks of evil. 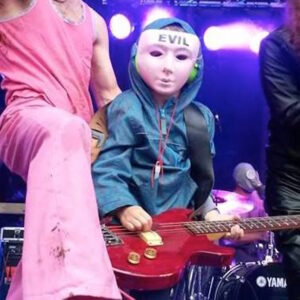 There’s an ambivalent play with childhood going on here: the terror of ancient fairytales and Toy Story misfits. The band’s logo is a skull and cross bones baby; a doll headed theremin is passed round the crowd bringing forth wails and shrieks; childish playground taunts wheedle and whine and the Lord of the Flies pig forms a grotesque spectacle. Yet the kids love it and a couple of masked mini-blizzers were pulled on stage to join in. The show pushed Kendal Calling’s family friendly motto to the edge. More Hansel and Gretel than Babes in the Wood.

This hybrid mix of comedy and horror works because Evil Blizzard don’t take themselves too seriously. At one point FilthyDirty came out in the crowd to join two women in ponchos at a picnic table, sitting there calmly like a pervert on day release. Meanwhile, Space drummer Allan Jones in a gas mask took the sticks so Side could join the action up front. It’s chaos. But it works.

Strange things happen in forests and if you went down to the Woodland Stage you were sure of a big surprise. It was too much for some. After the first track a man stalked past me saying ‘these are fucking shite.’ All I can say is, who invited him to the picnic? Evil Blizzard are the most original band I have seen for a long time. The show is on the road. Roll up. Roll up.

All words by Alizon Brunning Robertson. All photos © Karen Kavanagh other than where stated.