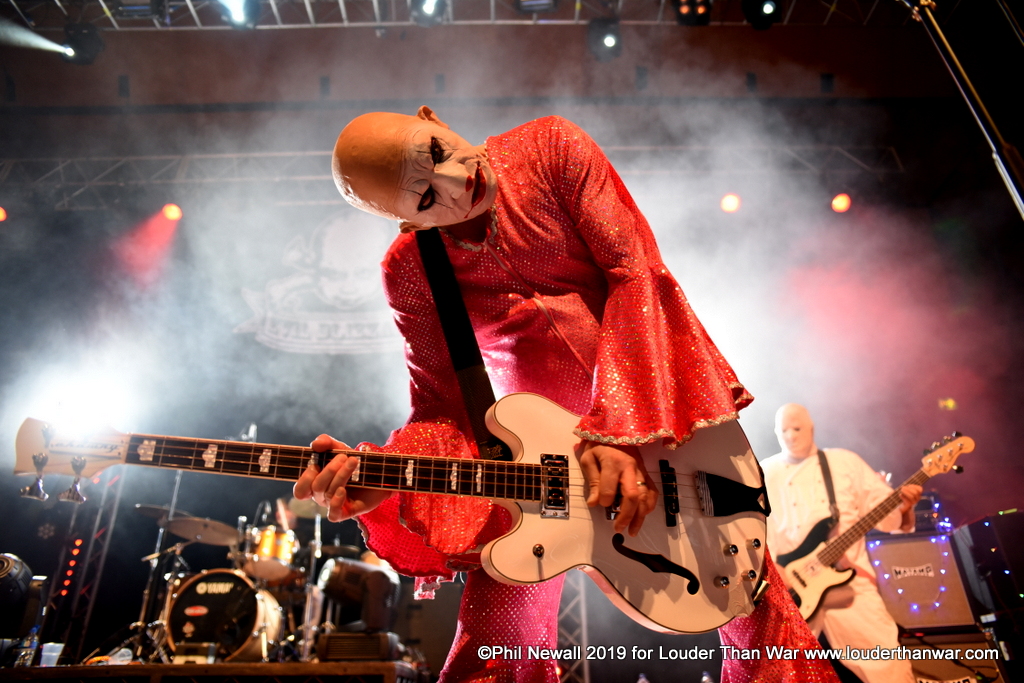 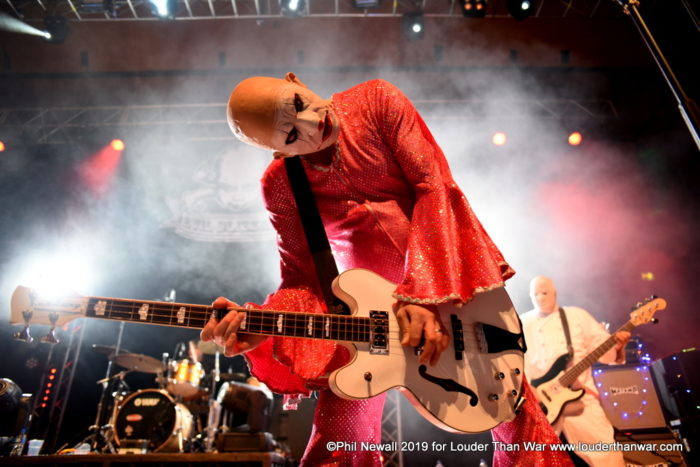 The misery has arrived at last. The Guildhall is a strange venue, part shopping mall, twin staircases and a massive hall which the Blizz misfits have dreamed of headlining for years. They’re finally here and they’ve brought some stunning bands along to make this one hell of a party. Wayne Carey is out on the road again for an insane night.

I start the night with my gig buddy looking for a decent local boozer that’s recommended to me by some bloke from Preston. The place is hammered with Blizz fans, some of them were at The Blizzmas Party in Manchester last year. It’s like a big family, the masks are out, it’s a bit like an early Halloween night out.

I arrive at the Guildhall just in time for the first band Fighting, who also do pies?? I swear! The four piece from Preston don the stage wearing their trademark F tops and kick off in fine punk style with their fired up tunes and cheeky banter. They go down well with the early audience and make a mark to kick it all off. Frontman James Hodge even has a bit of a rant about the use of Citalopram (anxiety depression drug) which struck a chord with a dark part of my past…

Part Chimp are a nice surprise to my ears, they trundle on and look like they’re gonna launch into a set of Beach Boys type indie tunes in their Hawaiian shirts. Do they fuckers like. They launch into a double barrel assault of guitars and bass and pummelling drums which batter the senses. It’s fuckin loud! I’ve never seen them before but will be watching the gig guides if they can replicate this performance. 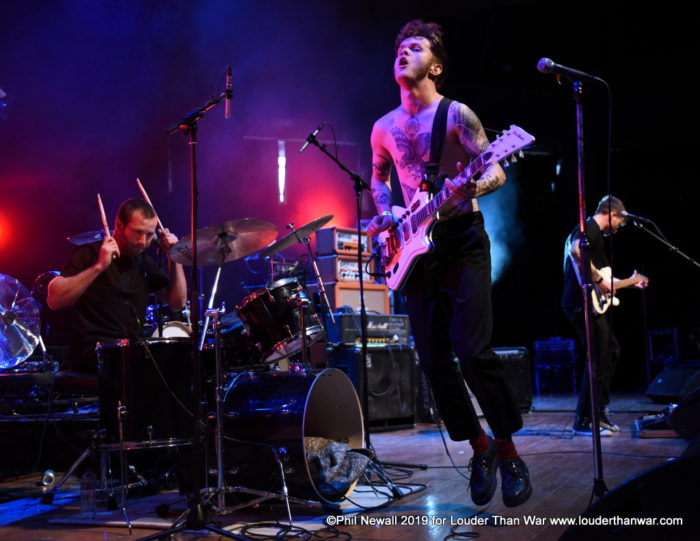 I last caught Strange Bones a couple of years back at The Deaf Institute, Manchester. They surprised me then as frontman Bobby Bentham is a livewire and ended up bar surfing, never mind crowd surfing on that night. They’ve come on even more since then and this performance is incendiary and mindblowing. They’re an explosion of rock fuelled techno tinged madness and Bobby spends more time in the crowd than onstage. If there’s anyone to take the title of the new Keith Flint it’s this guy. Here Come The Wolves sounds anthemic and when he disappears behind one of the amps and appears in that gas mask, he’s compelling to watch. I want some of what he’s on! 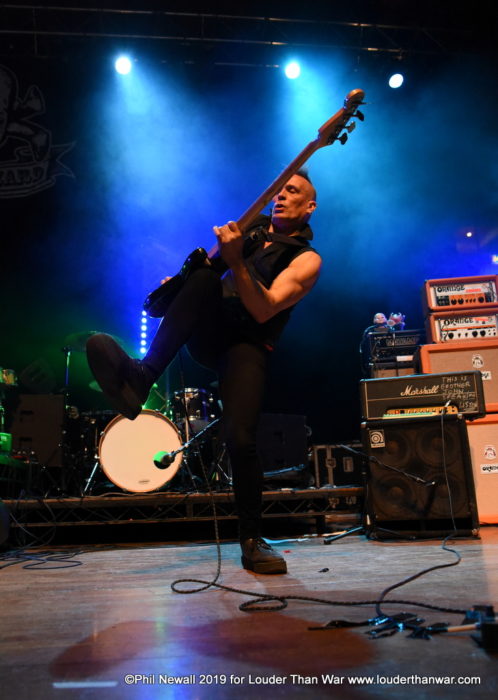 Membranes have a different edge to Strange Bones. It’s worlds apart from their sound, which changes the whole vibe of the place. It’s clever stuff and the new album still has that signature primal Membranes sound but goes up a level in textures. John kicks off the whole set with the usual opener of The Universe Explodes as powerful as ever, with his mad as ever wild stares and off kilter movements. The whole set is mesmerising to watch, especially giving a shout out to the rest of the band who add their own elements. I’m stood right at the front facing Nick Brown and he can get some strange fucking sounds out of that guitar which hooks me in. Highlights for me are the brilliant new tune Black Is The Colour with a great addictive riff, and the Joy Division like What Nature Gives. Well looking forward to the album launch when the choir leap out of John’s pocket! (His line!) 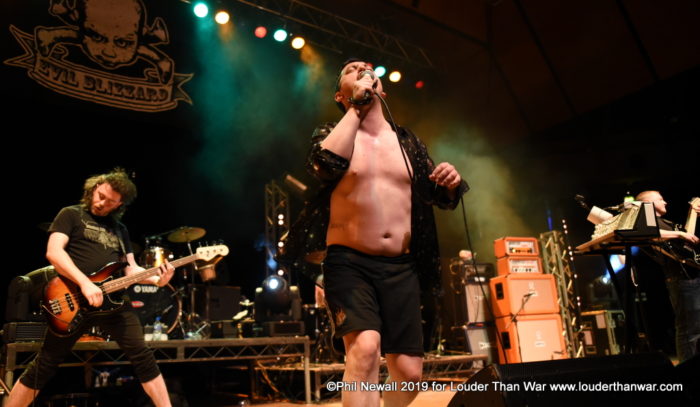 The noise behemoth from the North East Pigs, Pigs, Pigs, Pigs, Pigs, Pigs, Pigs hit the stage barefooted and are ready to blow up. The guitars are that loud as fuck on GNT that you can’t hear the vocals, and the first couple of tunes are a swamp of heavy psych rock. Matt Baty eventually gets turned up in the mix a bit and they continue with those doom laden Motorhead on downers crunching basslines, matched with the heavy stoner riffs that split your ears. Baty runs around the stage baring his chest and belting out those vocals on the likes of Cake Of Light and the brilliant Shockmaster. A proper strung out A66 totally hits the spot and batters me senses. Cracking set despite the vocal letdown at the start. 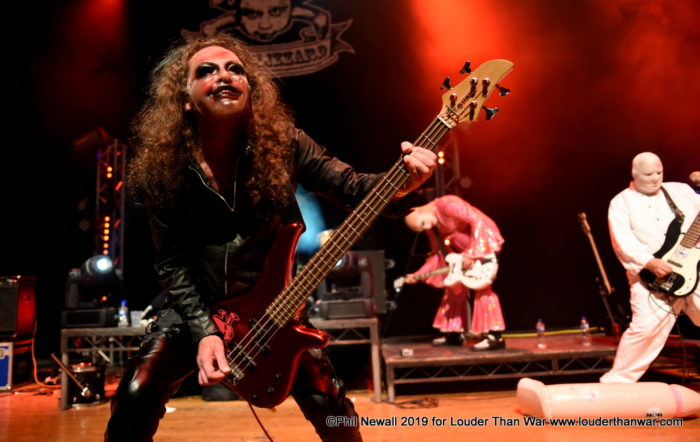 Evil Blizzard are no stranger to the intimidating boos and heckles from their mad following of assorted freaks who travel from all over the country (and Italy). Side heckles back with “We can’t fuckin hear you” then they launch in set opener Sacrifice which builds as usual into the cacophony of feedback and the addition of FleshCrawl adding the bleeps and tweeks. Unleash The Misery sounds as good as usual and the dolls head theremin gets an airing from Filthy Dirty. It’s the usual set of mayhem from the Bliizz, all theatre and glam. A giant inflatable cock bounces off the back of me head at one point. They have a few guest dancers on stage who come from nowhere, it all gets a bit mental. They slow it down with the excellent Pull God From The Sky, one of my personal favourites as it’s a masterclass in prog pysch and shows they can pull off some killer tunes. It all ends with a brilliant Are You Evil which still sound great as it ever did and I get a bit crushed at the front in the craziness. They bow down as a group at the end in proper theatric style and exit stage to a load of 80’s daftness which cements the love of Abba in the air. An excellent performance yet again and sadly only one more show this year. They will be missed!

Photo credits: Phil Newall (except Fighting and Part Chimp uncredited), Use of these images in any form without permission is illegal.