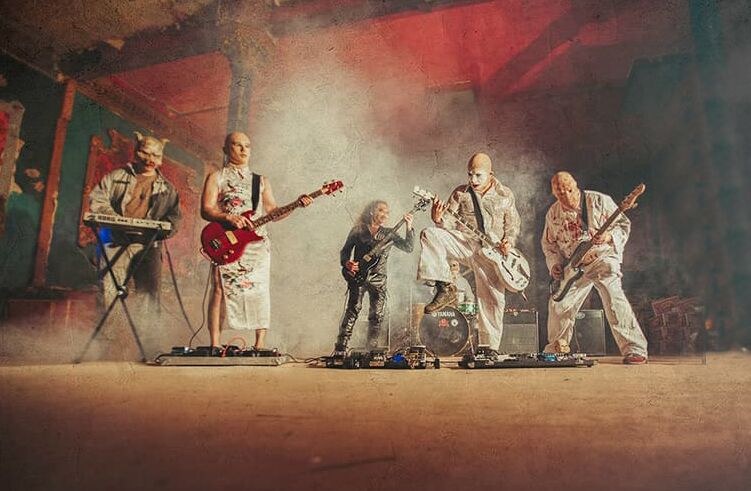 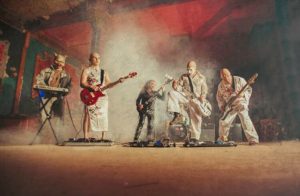 After a few years out Evil Blizzard are back with what I reckon is the best album released this year so far. The Worst Show On Earth is still on my playlist today and stands out as a post punk rock classic which should be in everyone’s music collection. It was also produced by Leeds finest hairdresser Kevin McNamara (Richard was killed in a bizzare gardening accident). I met the guys at John Robb’s (now) yearly event with The Membranes at the Ritz in Manchester and hit it off with them. I finally get the chance to reveal their influences in what leads to be a classic album. Each crazy masked member reveals all….

SIDE:
The Lamb Lies Down On Broadway – Genesis
First double album I owned. Full of prog classics with bits of Kraut rock, Moog solos, amazing drumming and castration! An album that delivers melody and a story that makes no sense at all. Perfect.
Exodus – Bob Marley
Simply the greatest collection of reggae known to man. Possibly my favourite album of all time. Reminds me of summers in IOS Greece and the bass and drums are some of the best on any record. Vocally perfect. and not one bad song to bypass.
PROWLER:
Budgie – 1st album
The bass is soo loud in the mix. Those guys swing!
Dio – Holy Diver
All killer, no filler. It’s Dio!!!
FILTHY DIRTY:
ABBA – Arrival
First album I bought. Silly outfits, ludicrous lyrical themes… I wonder where we got that idea from? I love pop. Unashamedly. Hit after hit;cI used to play this and my Wombles albums on 45 as I preferred things faster.
Ramones – It’s Alive
I heard ‘Sheena is a punk Rocker’ (and it sounded just like Abba on 45 – I hereby claim to have single handedly invented punk in my bedroom aged 7), went out and bought the first Ramones album I could find which was this and it is still the greatest record ever. Loud, relentless, as dumb as it is clever. We played with CJ Ramone a year ago and I went to pieces. Luckily he was a top bloke and got me drunk.
STOMPER:
Steel Pulse – Handsworth Revolution
The first album and set of songs that put me onto the long road to becoming a bassist. Prodigal Son and Ku Klux Klan being the stand out tracks. This album is a permanent fixture in my car.
Southern Death Cult – 1st album
Although not really an album it was made up of BBC sessions plus their single Fat Man and Moya, with live tracks. Such a great album and is still relevant 36 years down the line. False Faces can be played over and over and over again.
KAV
Funkadelic – Funkadelic
Fuzz wah heaven
Iron Maiden – The Number of the Beast
Best NWOBHM album ever. Metal up your ass.
https://www.youtube.com/watch?v=WxnN05vOuSM
Tour dates:
Saturday 30 June 2018 – Sunday 01 July 2018
Jesstival 2018
EVENT DETAILS
Saturday 07 July 2018
The Hairy Dog, Derby, UK
Gigantic
£10.00
BUY TICKETS
Saturday 27 October 2018
Brudenell Social Club, Leeds, UK
EVENT DETAILS
Friday 14 December 2018
Manchester Academy 3, Manchester, UK
Website: www.evilblizzard.com/
Album available at Rough Trade and all the usual sources. Buy it now….