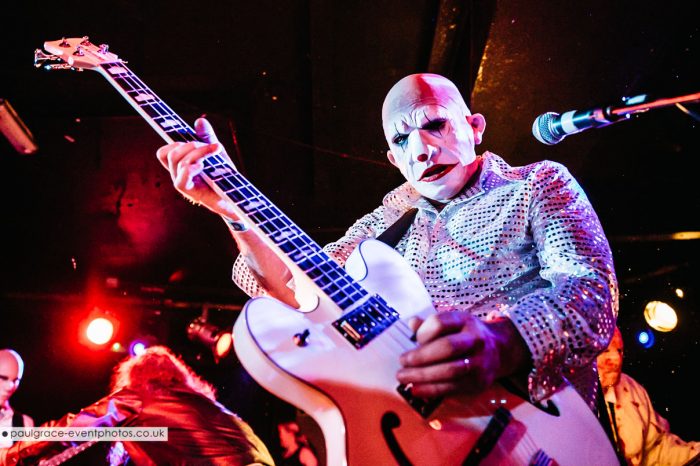 Evil Blizzard play Manchester Ritz on Saturday, May 5th with the Membranes plus their choir, The Lovely Eggs, The Cravats, One Sided Horse, Sink Ya Teeth and many others – tickets from here

I secretly carry a burning flame for Evil Blizzard. Not a piddly candle-on-birthday-cake type of flame but more blow-torch-burn-your-house-down kind of flame, for they were the first band I covered as a photographer/reviewer for Louder Than War. Sigh…

That was December 2015, the band’s second album Everybody Come To Church had just been released, the gig was beautifully shambolic and left me dazed but hooked.

Their shows have steadily gained legendary status with an anything/everything can happen philosophy (and pretty much always does!), and they have an impressively loyal gaggle of fans who follow them around the country (the guy stood next to me tonight has made the trip from Newcastle).

Tonight’s show is billed as a launch party for new single “Fast Forward Rewind”, and the Underworld is buzzing as support Nasty Little Lonely open with a ferocious blast of post-grunge/punk. Charlie B is a fabulous lead with a powerful vocal howl, she hammers the bass like life depends on it. New single Glitter with its shimmering riffs echoes early Nirvana yet retains a fresh character, they ooze with confidence and I have a feeling we’ll be hearing more from them.

The room is heaving by the time Evil Blizzard hit the stage who arrive to deafening screams of “Boo!”, the band react with a welcoming “Fuck off!”, the pounding drums of Sacrifice start and the furious freak show begins…

Tonight is of course about music but more than anything the Evil Blizzard live show is an immersive experience like no other. The band consists of four bassists, a singing drummer and a “Blizzpig” (keys), their trademark masks and outfits sit somewhere between kid’s fancy dress and extreme video nasty. Infamous for their self deprecating humour, Filthy Dirty informs is that today is his wedding anniversary and that his wife “is one hell of a lucky fucker”.

The audience ranges from teenagers to more mature rockers, many of whom are dressed up too (I spot a frighteningly realistic baby mask and there’s a pink poodle wearing a sharp suit). 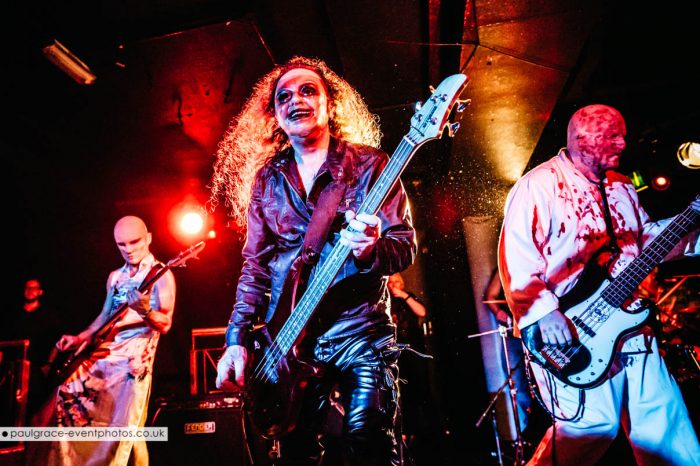 To the uninitiated, their music is a mix of classic Sabbath riffs, vocal chants, tripped out dub, and of course, tonnes of bass! It’s great to finally hear some fresh material; new single Fast Forward Rewind is an epic six minute journey in classic Blizzard style starting with an arpeggiated electronic squeal and growing to an apocalyptic climax. Slamming like a sonic tsunami, Are You Evil? is hands down highlight of the night and causes the effervescent crowd to pogo and bounce like it’s the 70’s.

Disappointingly there’s no Mop Man tonight (boo!) but we do get a blade wielding pig (yay!). Final track (and b side of the new single) Knock Knock Knock is when the fun really peaks; a perfect finalé during which the band and crowd swap positions; Evil Blizzard end up in the mosh pit and the fans invade the stage. Hell even the poodle slams a bass. Reverse anarchy genius!

An explosive end which results in the guitars getting smashed to pieces and textbook example of how to finish a show properly and leave ’em gagging for more.

God tonight was so much fun. The new album comes out later this year and if there’s a tour you’d be a fool to miss out.

All words and photos by Paul Grace. Paul is on Facebook, tweets as @pgracephoto and his website is www.paulgrace-eventphotos.co.uk