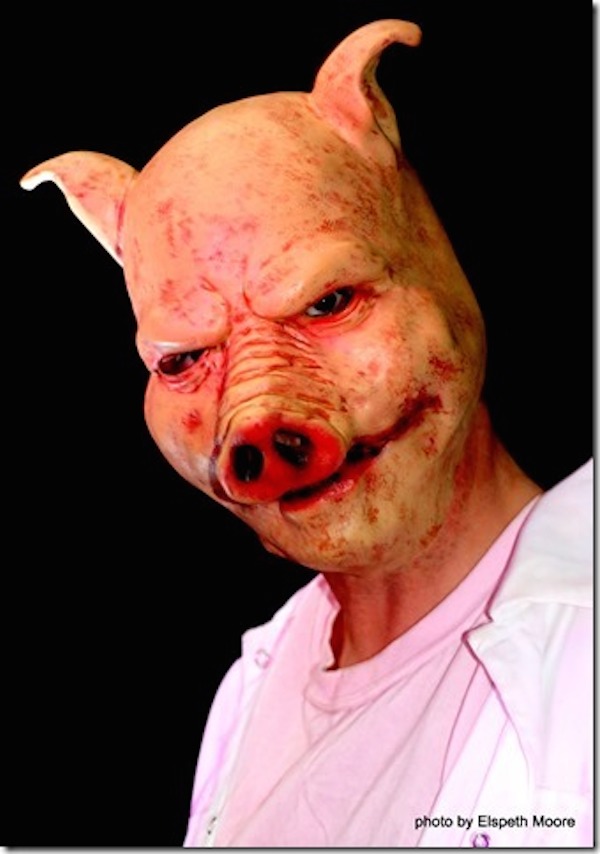 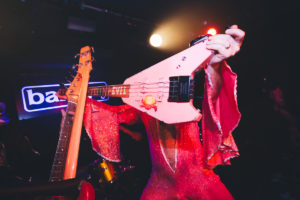 It was never going to be straight forward. An evening with self-styled ‘Double Doom’ merchants Evil Blizzard never is. But it is entertaining.

Not that long ago, Evil Blizzard were an obscure oddity; four bassists (sometimes more), one drummer and an unholy marriage of unnerving masks and sinister riffs. Not for the faint-hearted. Or Coldplay fans. However, they are definitely surfing the zeitgeist at the moment. Their second album released on Louder Than War Records, ‘Everybody Come To Church’, has garnered rave reviews (not just from LTW!). It’s expanded their unique sound and broadened their sonic appeal; tunes abound, some short and sweet, some longer and insidious. It packs a mighty punch, nearer to their live shows than their first album. Having first witnessed them at Rebellion earlier this year, I knew I was hooked. They won over a sizeable crowd in the Empress Ballroom, early on a Thursday afternoon. No mean feat.

So, it was a no-brainer that I get myself to the Camden Barfly to support Preston’s finest. I got the offer of a lift, so decided that would make a change and, with an early curfew, I’d get an early train home. Result! I hadn’t reckoned on delays, though, so after grinding to a halt on the rain-pelted M1, I’d missed both support bands. Apologies to The Young Men And Uncle Peanut and Bad Guys.

I wrote only last week of loving the community spirit at Eureka Machines’ gigs. Well, there is a similar camaraderie here, amongst the mask-wearing, oddly dressed fans. Who, with a couple of exceptions, weren’t present tonight. ‘Was the Warthog mask a mistake?’, I began to think. No, sod it! In for a penny… 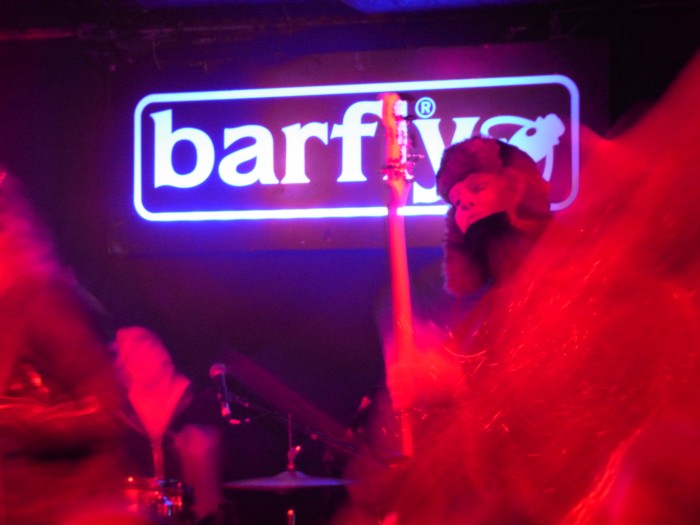 ‘Sacrifice’ bludgeons itself upon us and we are well away. It seems to have speeded up since the recorded version and works better for me. Even with sound problems, it is huge. Mind you, it is also louder than I can recall the Barfly being. It is sold out tonight, which is testament to their efforts to hone their sound/performance.

‘Stupid People’ follows. We are in on the joke; “you are stupid people, following stupid people”. Evil Blizzard’s set leans pleasingly towards the bigger tunes; ‘Laughing Gas’, then the anthem that is ‘Are You Evil?’ are over all too soon.

‘Spread The Fear’ slows things a little, before a deranged ‘Slimy Creatures’ sees the front row going increasingly mental. Blizzpig wanders through the audience, while Mop Man soaks the faithful, complete with business cards; “You have been mopped. Seek urgent medical attention”. Yes, it’s daft, yes, it’s downright weird. But it’s not all show, as the songs prove. Like the Royston Vasey house band, they end with ‘Watching’, then we get a rare outing for the vast noise that is ‘Whalebomb’. I can’t really describe it. Even live footage doesn’t do Evil Blizzard credit. If you think you’d like it, just go. But, bear in mind, it’s worth booking your ticket in advance nowadays. There’s a growing number of us who want this band on ‘Later…’ to show what wonderful mutants are out there playing live, entertaining yet pushing boundaries. Kids love this stuff. You’re our band now, Dave.

Words/photos by Martin Hallam and photos by Paul Grace.  Read more by martin at his authors archive.