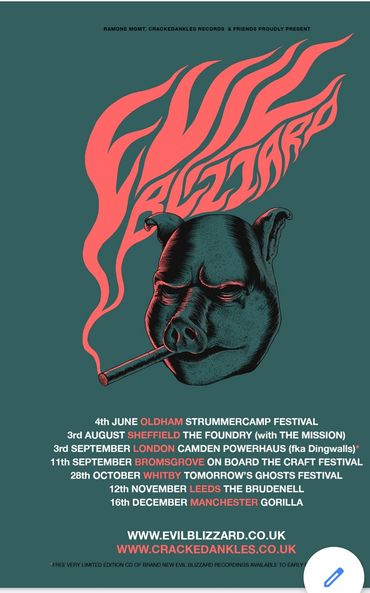 Louder Than War favourites Evil Blizzard are back again to spread their own kind of misery for their special army of Blizz-iots, who like to inflict pain on their ears in any way possible. I reviewed their last Manchester date here back in February and it was an absolute riot with support from the excellent Vice Vera and North Manchester’s gutter punks The Battery Farm, who excitingly have been invited back for the ever important Blizzmas date in December. You have been warned says Ramone, their long suffering manager…

Firmly back after a three-year absence due to the pandemic and severe bouts of
laziness. Evil Blizzard returns to blow away the mundane cobwebs of modern music
and inject some much needed incomparable noise back into your lives.

Headlining the Clash inspired Strummercamp in Oldham in June. Evil Blizzard then take their musical carnival on the road to Sheffield, Foundry as very special guests to Goth icons The Mission. A lifelong bucket list moment for some members of the band, who met in the summer of 1986 and became part of the band’s notorious travelling hordes known as the Eskimos.

Then it’s onwards to their most prestigious London show to date at the Powerhaus, formerly known as Dingwalls in Camden Town. After another festival headliner at On Board the Craft in Bromsgrove. They venture into Yorkshire once more to appear at the Tomorrow’s Ghosts Festival in Whitby with Marc Almond’s Loveless, Into a Circle (formerly Southern Death Cult), Fields of the Nephilim, Balaam and the Angel and many more.
Rounding off 2022 concert wise. Evil Blizzard take in one of their favourite haunts in
the form of The Brudenell in Leeds with Objections a band comprising of local legends Bilge Pump, Breads and Nape Neck. After the band’s 2018 Blizzoween show there, this is going to be monumental. With the emphasis on mayhem!!

Finally, Gorilla in Manchester on Friday 16th December. Blizzmas. The most
important date on the calendar that month, armed once again with their favourite
protégés Battery Farm as special guests. New material is on the way. And quite possibly a new direction. All will be revealed in due course. You’ll just have to come along and find out.