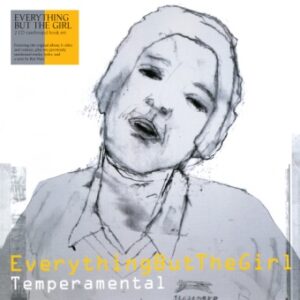 Everything But The Girl: Walking Wounded/Temperamental (Edsel Records)

Simon Tucker reviews the upcoming EBTG re-issues out next week on Edsel Records.

Tracing the history of Everything But The Girl’s two main protagonists, Ben Watt and Tracy Thorn, you will find that from their earliest days they were very keen on experimentation and going against the norm whether that be the raw pop of the Marine Girls (Thorn) or experimental folk jazz (Watt) the duo would always be seeking new inspiration and a new way of delivering their message.

The finest example of this is on the first of these new reissues, Walking Wounded. After the success of Todd Terry’s remix of Missing and Thorn’s devastating appearances on Massive Attack’s seminal Protection, the duo returned from New York and submerged themselves in UK bass culture which bled lovingly into the album creating a new soul music for those yearning for the hedonism of the night and the warm fuzz of morning light.

It is easy to hear where the main influences were coming from. As Tracey herself states on the reissues liner notes;

“Within two weeks Ben had been down to see Fabio and Bukem spin at the Milk Bar, and Goldie’s Metalheadz night at the Blue Note. It became a game-changing moment.”

Game changing indeed as you truly feel the luscious and deep movements of early DnB cascading through Walking Wounded with the harder edged sounds emanating from the Alchemist’s Metalheadz night to the liquid grooves that LTJ Bukem would become famous for.

A sense of new-found confidence screams out of Walking Wounded. A sense of joy that EBTG have discovered a style that they can twist to their own for make no mistake, Walking Wounded is no bandwagon jumping exercise. If it was it would not have aged as remarkably well as it has. At the time of its release many critics lumped it in with Massive Attack, Portishead, and Sade completely missing the point (in fact they missed the point with all three of the artists mentioned) terming it “dinner party” or “coffee table” music (have you actually tried putting on any albums by these artists and just having it roll in the background? It’s impossible) which was doing the music an incredible disservice as yes it was soulful but soulful does not mean laid back. Yes, people used it as a soundtrack to the party after the party when the night/day was slowing down, but if you have ever experienced one of these nights and the rising of the dawn after a club session, you will know that this is where the real magic happens. It is when you start internalizing your thoughts or speaking at your most open.

The perfect example of this is on the deep dub of Single which was a top ten hit for the band. On this song we hear Thorn’s (always) stunning voice talk us through some cavernous lyrics of loss and want but the music is where the real heartbreak occurs as we are swirling the outer limits of dub and breakbeat. The effect is remarkable and it is one that is repeated throughout on tracks like Walking Wounded (full liquid DnB), Flipside (harder breakbeat) and Wrong which sees the duo fully embrace the dancefloor and deliver one of the most understated but glorious house numbers there is.

The influence of Walking Wounded can be heard to this day seeping through the electro-pop of La Roux, to Burial’s aching soundscapes, and the experimental disco of Roisin Murphy.

The follow up, Temperamental has aged slightly less well and there can be many reasons for this but the main one is that it feels like a weak sequel more than a full progression. On Temperamental the duo got even deeper into club culture with Watt even hosting a deep house day/night event in London (Lazy Dog) and the influence of the house genre is writ large all over with opener Five Fathoms being the most perfect example of this. Kick-drum, funky bass, and waving synths pull us onto the space and invite us into the EBTG party but unfortunately,  the party is rather dull this time round. The title track is decent enough but has no extra bite and whereas before EBTG were absorbing influence to create a new, this time it feels more like the influence was too strong and it becomes instead dance-by-numbers.

That’s not to say that Temperamental is completely without merit as the G-funk feel of Low Tide Of The Night slinks along gorgeously and adds a rising sense of hope, and Compression (the highlight of the album) with its return to breakbeat culture, all have aspects that are worth revisiting many times over.

This time round it is the bonus disc that is the real treasure as we get some great remixes by producers such as Fabio, J Majik, Markus Shulz, and Kenny Dope. Every single one of these 10 tracks are worth investing in as there is most certainly something for fans of all kinds of bass music.

These reissues really highlight the importance of EBTG. In Thorn, they have one of the finest lyricists and vocalists the UK has ever produced and in Watt they have a musician who is unafraid and unashamed to try his hand at anything that takes his fancy. Musically, Walking Wounded is the one most people will, and should, go for as it stands as a testament to a time in our history when musicians were brave, who were never worried about sales figures, but only followed their muse. Walking Wounded is not only a piece of historical interest, it actually stands head and shoulders above a lot of releases out there currently.