101 albums to die before you hear 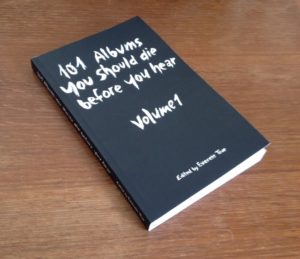 26th May 2016 saw the official launch of a new book masterminded, compiled and edited by the infamous rock critic Everett True. The one time Melody Maker writer, and more recently, Plan B magazine and Collapse Board blog creator/contributor has this year emigrated from his adopted country of Australia back to Brighton and seemed intent on continuing his lifelong war on white men, guitars and musical mediocrity. Never one to mince his words, True is both loved and loathed in equal measure by readers, fans and musicians. However, whatever you say about Everett True or ET or Jerry Thackery or whatever expletive you want to direct at him, you cannot deny that the man has integrity, passion and the need and desire for invigorating, life affirming, life changing music to flow through his (and your) veins.

Hence, since moving back to Brighty (see what I did there?) True immediately set up this brand new grass roots, “community based”, not for profit company called ‘Rejected Unknown’ to bring together collaborators, illustrators, writers, photographers, you name it, to come together to create something brilliant. And specifically, he targeted non-male writers to contribute more than anyone else. So True wanted this to be something. Something fun! Something annoying. Something valuable! Something tangible. Just something worthwhile to hold onto in these dark days that we currently live in.

Named after the 2001 Daniel Johnston album (ironically his first release after being dropped by the (fickle) major label Atlantic), Rejected Unknown brings together the above mentioned professionals, amateurs, contributors, freaks (?), in its first release, the book ‘101 albums to die before you hear’, subtitled ‘A compilation of reviews of music so dire it should never be listened to’.

This book complied by True is a guide if you will. A guide to help you have another listen to the classic ‘sacred cow’ LPs by acts such as The Police, Radiohead, The Smiths and Frank Zappa. And these ‘takedowns’ are not just reviews either. Mixed in we have Haiku’s and illustrations that aim to bring these cows back to earth with a bump that the contributors feel they deserve.

Harsh? Possibly. Tongue in cheek? Maybe. Hateful? Never! As True says in his press release, “Make no mistake about this, 101 Albums To Die Before You Hear is all about love. Love for music, love for writing and, most importantly, love for life”. And illustrated throughout this book are visual takes on said classic albums by celebrated French artist Vincent Vanoli. So whether you agree with the words  or not, the hilarious illustrations (along with the return of Mr Angry) are worth the money alone.

His main objective with this project (that is hopefully going to spawn more releases under the Rejected Unknown banner including his Autobiography) was to show you “how much else there is out there and is fierce in its condemnation of the mediocre, the obvious, the boring, the reactionary and the bigoted. A book to move, provoke, inspire and outrage” And also I guess it was to see what could be achieved with a ground swell of activity and enthusiasm, combined with ‘go fund me’ contributions.

Well it certainly does all these things and more. The venom that certain albums attract is pretty vicious. Is it justified? Well, you will just have to get a copy and find out.

Whether you agree with the contributors is up to you. Lots of ‘classic’ albums are seen as sacred cows, but are they untouchable? Well there is always someone else to give another opinion. And that is exactly what we have here. People who have spent the whole of their lives hunting out music who may want to let the new ones have a go for a change.

It’s fun. It’s controversial. It’s not for profit. It’s opinionated. It’s angry and its frustrated. But it is also genuine and heartfelt. This book comes from someone who has dedicated his whole life to listening to music new and old (mostly new). What else would you expect from Everett True?

More info on the book (and how to buy it!) and Rejected Unknown is available here