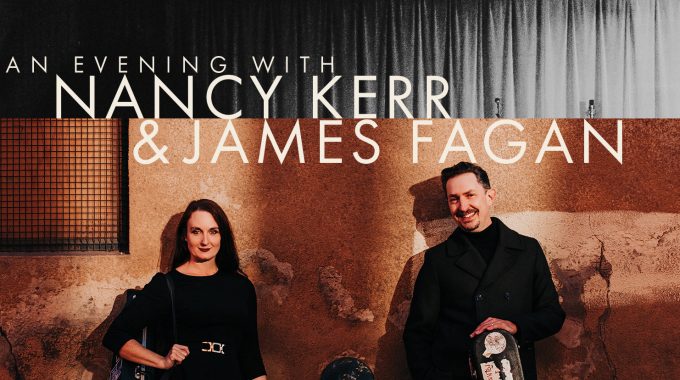 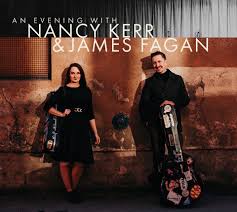 Multi-award-winning duo return after a nine-year absence with their first live album.

There’s something quite satisfying about the double hyphenated phrase ‘multi-award-winning’. Nancy Kerr and James Fagan both have plenty of irons in the fire although arguably, it’s on the rare occasions they play and perform as a duo, that they bring out the best in each other. Nancy’s flowing fiddle style and classic folk vocal getting pushed, coaxed and generally egged on by the ringing strings of the Fagan bouzouki and guitar.

The Evening with… collection gives them a chance to show the full extent of an impressive repertoire that stands currently at five albums as a duo, on which of late, they seem to have had neither the time or opportunity to build. The live set is the perfect opportunity for them to revisit the full range of their full catalogue that includes Nancy’s stint with the Elizabethan Sessions as well as something brand new in Lovers Of Us All, whilst also referencing James’ Australian upbringing.

They hit the ground running by ripping (or at least as ripping as folk musicians get) into a sprightly Broadside followed immediately I Am The Fox that heads unexpectedly into an Eastern flavoured,  prog rocking in 7/8 time, Kitchen Dance tune set. It’s an expertly planned sequence that shows the nouse of striking hard and early.

In a world where live albums and access to live recordings come thick and fast so as not to have that special quality or appeal any more or get a generally bad press, here’s one that’s totally relevant and rousing in the way live albums should be. And for anyone who’s ever read Slash’s autobiography, take a tip from him and always listen to the live album first. It might not rank up there with the Live And Dangerous or Made In Japan sets that rule the live album roost – maybe Live And Approachable or Made In Sheffield /Kimpton are more apt – but it does the job in showing where Nancy Kerr and James Fagan, in their words,  “find themselves musically after more than twenty years as a duo.”