AN EVENING WITH DEVIN TOWNSEND

Swapping the big noise production for a more low key and intimate affair, Hevy Devy lightens up (a bit) and puts on a show worthy of the olde tyme music hall venue. Still as mesmerising as ever.

We seemed to be in general agreement with the music critic world who feel that Devin’s latest album,  Empath (our four and a half star review here) is a major release. Major as in ‘Album of the Year’ sense and one that showcases the numerous faces of Devin Townsend across a collection of songs, and then in the one huge slab of the twenty minute-plus Singularity.

Taking a step back after almost two years of building Empath, to where it all began, he’s taken on a short-ish set of dates with a stripped-back show in some select venues for those lucky enough to bag tickets.

It’s the first part of the Empath touring cycle that should, as we’re led to believe, lead into 2021 with an extravagant all singing, all dancing presentation of his masterwork. He’s no stranger to those, neither is he a stranger to standing on stage on his own with an acoustic guitar, a few effects and a propensity for a chat and self-deprecating humour. Leeds City Varieties is typical of the sort of venue that would allow him that space and to be able to create the right vibe; the  Grade II listed music hall, hardly altered yet lovingly maintained in its Victorian splendour having played host to Charlie Chaplin and Houdini and for those of us old enough to remember, The Good Old Days TV show that recreated the palace of varieties back in the late Twentieth Century.  To be frank, it sees Devin Townsend present a night of pure old-style entertainment. 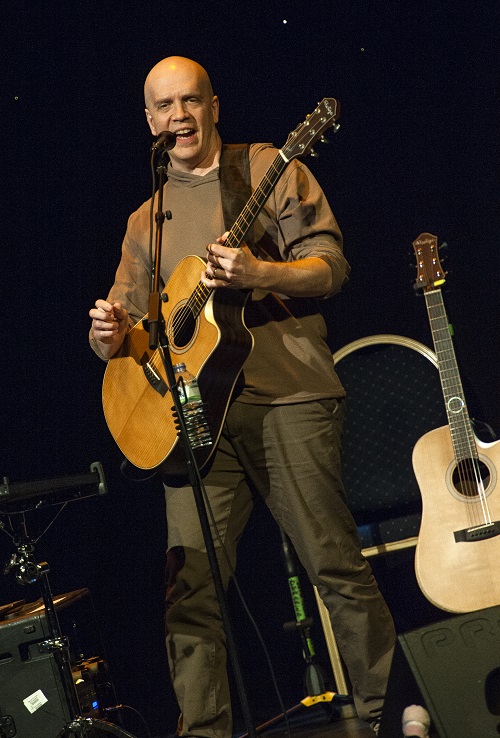 From a sensitive and haunting  Heart Baby, combined with Let It Roll,  it’s an opening that sets the tone with two choices that perfectly fit the bill and lulls us all into the mood of the evening before the full-on throat busting stuff. Yes, the likes of Deadhead give a chance for the deep roars to get the crowd all excited and in dynamic contrast to almost operatic caresses that sit so comfortably with the ringing steel of acoustic guitar and ambience as the familiar and the new (he has a pretty good go at the work in progress arrangement of Why from Empath) are mixed with some light-hearted moments of both chat and music. Ih-Ah a moment where he admits, yes, it isn’t all about a sombre mood although Funeral is an early and stunning highlight.

Following an extended set of songs, things become more relaxed with the first Q&A part of the show that sees Devin as his effusive and forthcoming self – a polite Canadian who can’t say no so that when endless calls and requests start to appear, it’s clear (a) he is going to have a go and (b) it might coincide with what was on his notebook. The brand new Borderlands (with which he seemed strangely unfamiliar) and Shitstorm were tried in varying degrees of success along with Almost Again although the audience shout out for Deep Space worked a treat.

It is a mesmerising second half that sees him singing Bring Him Home from Les Mis to a heckler and then have a go at Grace for a call-out for someone’s daughter…called Grace…the audience all adding their harmonies like the gospel choir on the Retinal Circus, and the request “can I film it?” being answered with an  “of course – film it all!”

Rounding off with “something that I want to play”  (fair enough – Greg Lake used to talk about ‘three for them, one for you’) Divine and an uplifting Life, bring things full circle. It may be the start of a new touring cycle that looks set to follow an ambitious route but will surely prove difficult to top.

A true gent who is very generous with his time in promotional tasks while doing his best to keep his voice in check for some of the exertions that even an acoustic show demands, we are lucky to get the chance of a quick pre-gig chat with Devin on a number of subjects to catch the thoughts of Hevy Devy on:

He’s been very supportive of it which is cool as I grew up listening to him too. I’ve read a lot of positive responses to Empath, so ‘surprised’ might not be the right word but ‘relieved’, because it was a leap of faith to make this one. What I’ve been doing over the past three records is that as much as I was enjoying it, it was increasingly less risks and to take risks at this point – at the age of 46 – is much greater than when I was 22, so there was a certain amount of trepidation when I went into this one but ‘relieved’ is how I feel!

By and large, people seem appreciative of it and I’m not as exhausted as I was a couple of weeks back. I was shot but now I feel ok and on the mend.

I think a lot of the reasons why this record is as  dynamically varied as it is just middle life stuff. I just needed to look into the past of what I’ve done and take stock of each one. Making peace might be too strong a word but I’m doing fine – trying to make peace with yourself is really hard as it often seems there’s no progress being made and then suddenly out of the blue you get the feeling that everything’s ok! (It’s what he talked about later in the show as being like short bursts of “Hey! I’m fine!”). Every person needs things explained in a way they can relate to and for myself, a couple of things I dived into helped me figure out some of my own truths I guess, but I feel relatively healthy now – two weeks ago I was a mess but things are on the up.

The plans for touring Empath (with Haken on the UK dates)

It’s coming together as one of the sidelines of doing this solo ‘Evening with’ tour is that it’s given me some time to think about it. Even onstage now, I’m playing the song Why? from the album which I kinda screw up every night and people say “why don’t you practice it backstage?” and I just don’t want to right now.

I need to decompress a bit but I also need to promote the record so it’s good to be out on tour so in a sense I used the shows as rehearsal too which works and isn’t as crass as it sounds – I’d say fairly engaging. Tonight will be the third try and I think I’m getting it!

I know Haken and they’re great – their keyboard player Diego is going to be playing with me too. That tour will be fantastic plus each tour I do for Empath will be with different people. For this first one, there will be Mike Keneally, so it’s a real interesting group of individuals with the first one.

Why? works ok actually; even though its highly orchestrated on the record it’s only about 4 or 5 chords so as long as you play the chords you can get the melody out. It doesn’t have crazy drums or a lot of abstract parts and it’s pretty much like a lullaby. So even on the record, there are strings and horns, it’s easier to translate that to an acoustic guitar than something like Genesis. What I originally did with Why? was have a guitar with a midi pick up in it so that I had it going into my computer to sound like violins but I was just playing the chords, so technically it’s just a guitar.

That song is my ode to Enya. I loved her so much but I always wanted to have a heavy version of that sentiment. Plus the song summarises the record with it being an anti-suicide sentiment – what the record is meant to represent.

The style of the ‘Evening with’ show

As soon as you get a bar and people standing up you’re not going to get a quiet audience and although what I do is typically loud, this works best when it’s quiet which seating allows to happen. It’s a different and cool experience. I’ve only seen this venue for about 40 seconds as I’ve had meetings and interviews since I’ve been here so I’ve not left the room. With the Q&A things, ‘interesting’ would be a mild way of describing it but it’s been pretty intense but I welcome it  – I have nothing to hide.

Showcasing his Crocs on the album cover

The crocs were there intentionally! I have been given so much shit about those and it’s not like I’m a fan but I didn’t want to put on any airs at all – there they are. The fur-lined ones turn to a mat very quickly, but you gotta work them in brother!