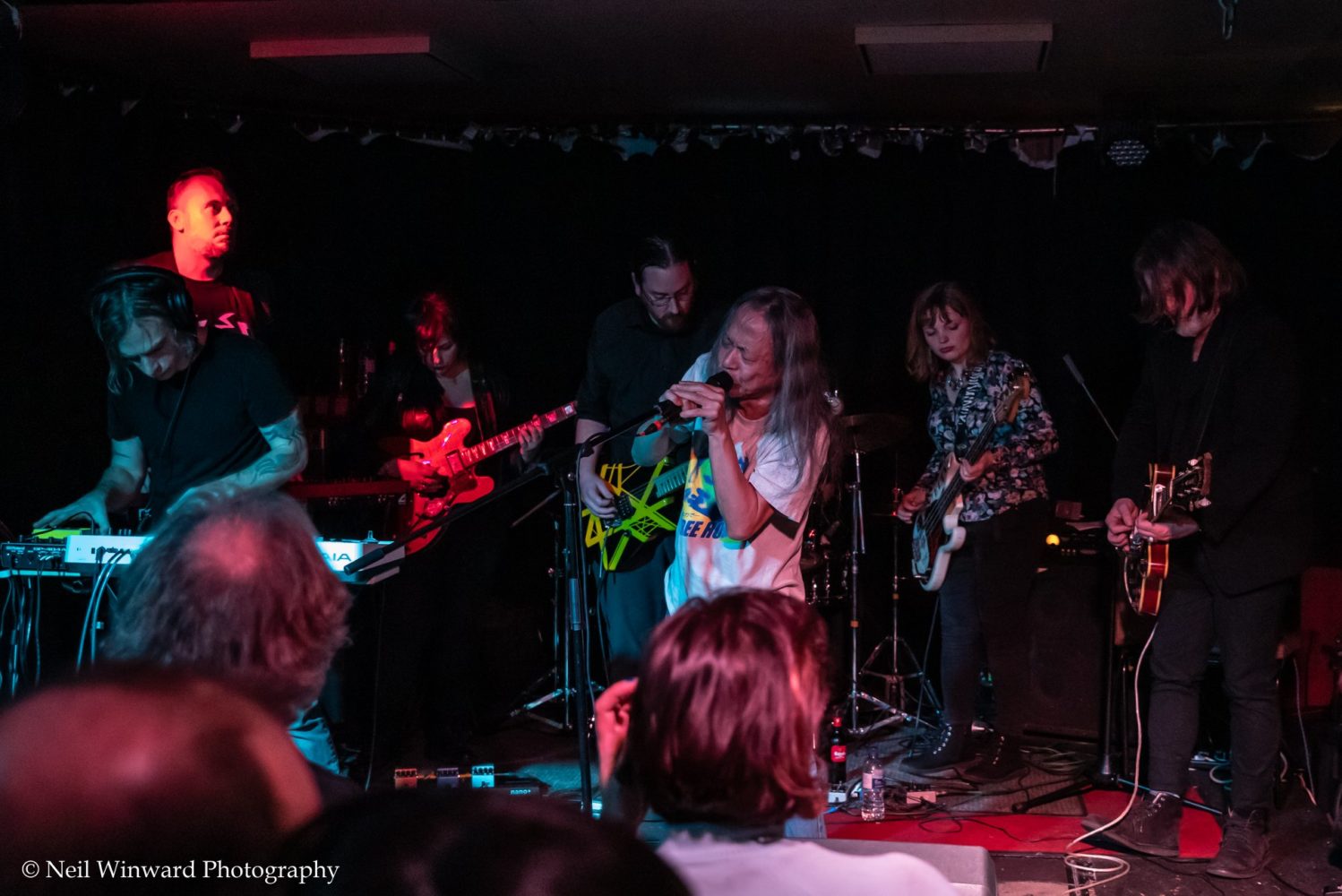 Last week Manchester was voted ‘rock and indie capital of the UK’ (according to TickX, with the original research available to view here) and this maverick month of action crammed full of gigs and new releases may underline why. This Thursday 15 November marks the return of Off The Record music festival and conference, with the Friday evening a particular highlight, full of live performances in the Northern Quarter from some of the most innovative bands around at the moment including Peaness, Fizzy Blood, vwls, SPQR and many more. 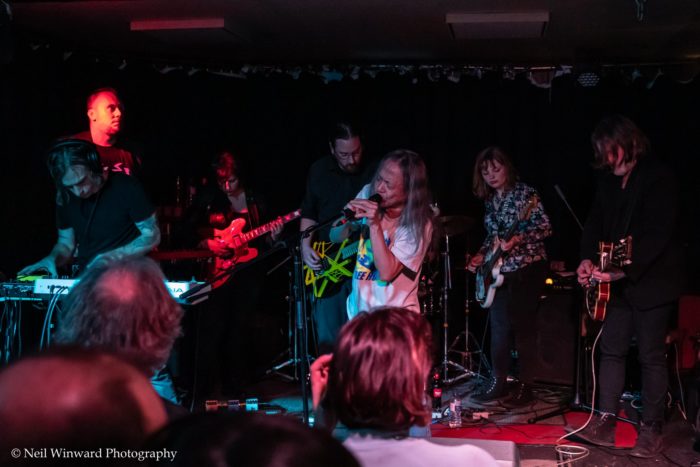 Music evidently has the power to make a difference here – and the 18 November sees a benefit gig for local newspaper The Salford Star at the iconic Eagle Inn – with four featured artists bringing everything from krautrock to in-yer-face punk: The Sandells, Four Candles, Matthew Hopkins and Sticky (all for just £5 on the door).

Thursday, 22 November 2018 marks another date for the diaries, as four bands fizzing with a psychedelic-punky edge take to the stage of The Peer Hat, Eyesore & the Jinx, Gated Community, Springfield Elementary and The Early Mornings. Or perhaps you fancy a bit of Glam? Remember, the 24 November sees much-loved clubnight HEART of GLASS also take place at The Peer Hat, presenting a November special of ‘Dandy in the Underworld’. Get on your glad rags.

For a taste of something different, and a Sunday sure to satisfy, 25 November is the date of Little Sparrow and Elfin Bow at The Bridgewater Hall, two delightful acoustic acts with a folk-infused sensibility.

And there also some upcoming events well worth booking ahead for, as 1 December sees ‘Music Is A Weapon: MCR “Punks for West Papua”‘– an evening of music and raising awareness for the people of West Papua with The Blinders, the Membranes, Witch Fever and Modern Family Unit at Alphabet Brewing Company. Punks For West Papua Manchester co-founder, Gary Hilton of Salford-based Gas Music (and also one half of Modern Family Unit along with Steve Southern) previously spoke to Louder Than War about the significance of this event.

Later next month also sees Foundations Festival take place at The Peer Hat and AATMA 14-15 December, a celebration of music and community put together by AnalogueTrash and Valentine Records, with the Community Action Stage co-curated by John Robb, a HAUNT Manchester Black Christmas party and plenty besides. Acts on the bill include Max Tundra with a headline DJ set, ILL, Goteki, HUSK, STOCKSNSKINS, Beinaheleidenschaftsgegenstand and many more. Tickets are still available.

One to look forward to is the Weimar debut single launch gig – John Doe/Curse the Songs (double A-side) – set for The Eagle Inn, Salford on Friday 1st February 2019, with support from Sticky Pearls, Dominic Carlton Jones and Genevieve L. Walsh (poet), with more details TBC nearer the time. Weimar enchant audiences with their blend of art rock and post-punk, well worth a listen.

And if that wasn’t enough, here is an overview of events past as well as upcoming releases:

Live review: Damo Suzuki and The Sound Carriers with ILL and Trianglecuts – 8 November 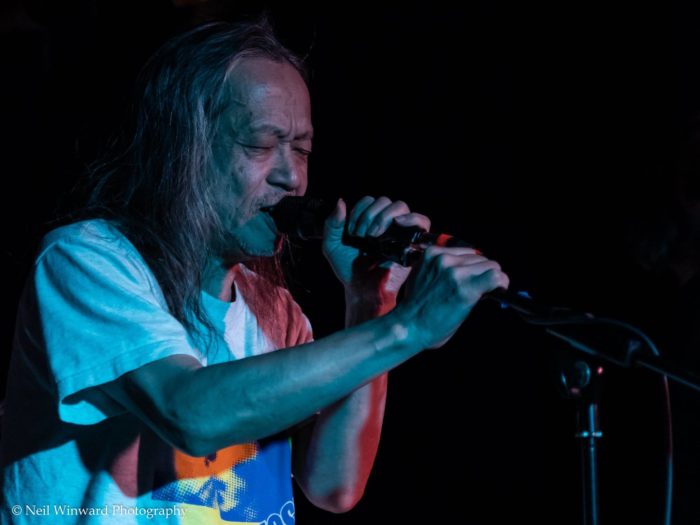 It was a unique gig featuring creativity and experimentation from across the decades, as the legendary Damo Sazuki took to the stage of Manchester’s AATMA, backed by a brilliantly deft collection of Sound Carriers (a range of local musicians joining him to jam!) on Thursday 8 November. I was both allured and seriously impressed as the former CAN frontman unfurled an enduring set complete with his emphatic vocalisms, still with that distinct krautrock edge. Energy fizzed around the room, with the performance of the ‘Sound Carriers’ particularly notable too; after all, a ‘jamming’ session live on stage carries the risk of sliding into chaos. However, the whole arrangement was remarkably slick, the series of musicians shaping and sustaining the groove with given precision, yet still relaxed enough to allow some elements of wildness emerge in there. A winning combination.
Prior to Damo’s appearance came two bands from Manchester known for their rawness and atmosphere. First were the duo Trianglecuts, delivering post-punk electronica pushed through with keys, dark layers and a depth of intense vocal loops. A little like a soundtrack for those dark and mysterious dreams which still enchant us – this was music which seethed and stimulated a mood of intrigue; highly appropriate to the evening. I also enjoyed the two band members’ stomping, swaying connection with their sound.
Also on the bill were the punchily-powerful ILL, serving up a succinct set with smashing intensity. Engaging post-punk with wild workings of guitar, driving drums, bass and kaleidoscopic keys – the band opened with the accelerating audio whack of ‘Stuck on a Loop’, followed cleverly by the slower, more sinister grind of ‘Slithering Lizards’. This band highlight their progress every time I see them, increasingly confident, melting together melodies with a maverick streak, before turning it into a channel of importantly in-yer-face honesty. Their lyrics offer insight into themes including mental health, women’s experience and political protest; from the anthemic ‘ILL Song’ to the cutting cry of ‘Kremlin’. Having supported The Lovely Eggs earlier this year, it is evident that ILL are onto bigger and bigger things, whist still crucially keeping their socially-seething, anarchically intelligent edge.
In all, an alluring evening which had the audience gripped in a groove, Damo Sazuki sealing the night with wild energy and engagement, vocal volleys and a stand-out selection of Sound Carriers who filled the stage; those being Jay Taylor, Whitney Bluzma, Paul Millsopp, David Fox, Howard Jones and Doug Hemimgway. Organised by Mark Corrin and Luisa Maraffino (multi-tasking on electronics and guitar respectively in The Sound Carriers also), this was a memorable event melting a massive array of influences and styles, underlining Manchester’s continuing creative buzz.
Photography: with thanks to Neil Winward Photography 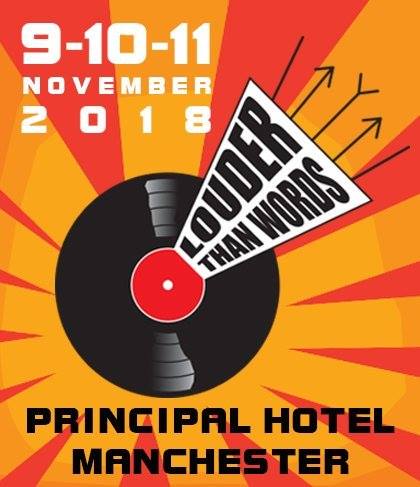 Marking itself as one of Manchester’s most eclectic festivals, Louder Than Words kicked off on Friday 9 November at Oxford Street’s iconic Principal Hotel, with its massive, genre-spanning celebration of music and its relationship with words. From book signings to lyric analysis… this long-weekend had it all. An opening speech by co-organiser (along with John Robb and Dr Simon A Morrison) Dr Jill Adam underlined just how far the festival has advanced over the years, now working with Manchester Metropolitan University to engage eager student journalists.

It was indeed an engaging group of university students who interviewed the enthusiastic Gemma Cairney to start proceedings on the evening of the 9th, with Cairney sharing her experiences of the airwaves (BBC Radio 1, 4 and 6Music to name just a few), as well as her ‘Open’ book series, talking about the heart, mind and plenty more. This followed with a hilarious solo show – as legendary musician Guy Pratt (aka the Inglorious BASSterd’) told an audience about life as an internationally-renowned bassist and his book My bass and other animals.
Other features across an action-packed weekend included the evocatively titled mu-sic journalism panel “Writing about music is like Dancing About Architecture”, fantas-tic folk musician Eliza Carthy in conversation, a discussion between punk icon Jordan and Cathi Unsworth, Dave Haslam eloquently and evocatively talking about his engaging account of Manchester’s music scene (and beyond) via his new book Sonic Youth Slept on My Floor, music writer and critic Everett True fuelling up attendees with guerrilla-style readings from his Ed Sheeran Is Shit (and Other Major Musical Malfunctions) and writer Ian Rankin tracking his life through 10 albums.

A particular personal highlight was the Glam Vs. Prog Saturday showdown, between Simon Philo -author of Glam Rock: Music in Sound and Vision, defending the genre against Prog aficionado Daryl Easlea (complete with an impressive cape) – author of the newly updated Without Frontiers: The Life and Music of Peter Gabriel. Glam won by one point, even though Prog fought its corner with a particularly memorable reveal of a pop-up badger (inside the album One Live Badger by the band Badger). The day that Glam was nearly upstaged by a badger…

With plenty more across the three days, Louder Than Words 2018 solidified its importance and status not just in the city, but on a national level – with its range of local and visiting attendees alike stirring up questions from ‘is current music journalism critical enough?’ to ‘how can we engage younger audiences with live music?’ – taking a look not just at music itself, but the visual and consumer cultures that surround it. With the added power of an impressive volunteer effort, this is an event actively involving people from across the generations and crucially doesn’t shy away from directly discussing topical and tense issues in the music industry. 2018’s festival has made a loud impression, for sure. 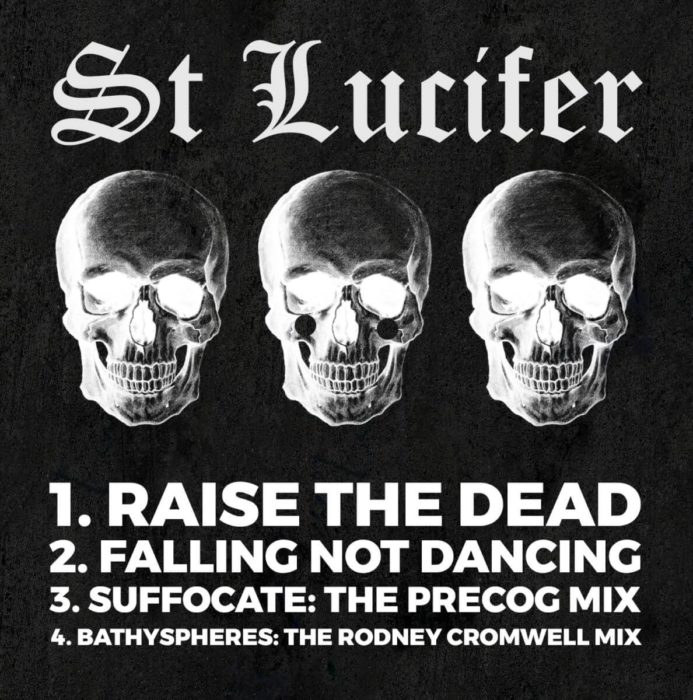 After their dark, delving EP ‘Crucible’ released just a matter of weeks ago, Manchester’s own St Lucifer are back with another EP ‘Raise The Dead’ (on AnalogueTrash) – retaining the mad mixture of electronic-intensity-meets-metallic-majesty I am enchanted by. This latest EP certainly is no exception – though, if anything, the beats are even more accelerated with a fizzing electric edge, suggesting stories of becoming tangled in the dubious tripwire of twenty first century living: trauma, digitisation, disconnection and self-destruction.

The title track retains an unrelenting rhythm, synths and a sound coming close to the clink of a cowbell brought up a few octaves. This all adds to the unnerving mood, whist the vocal effect is layered and loaded with narratives of felt intensity, atmospherically articulated by Still Forever’s Amy Griffiths.
Indeed, this EP expresses the band trying new approaches to expressing their dark experiences of modern life; the second track ‘Falling Not Dancing’ highlighting this perhaps most forcefully of all. Another unrelenting beat is emboldened by Charlotte Winchcombe’s entry of spiralling, searing guitar building the backbone of the track, around which the band bring their own instrumentation, crafting confessions like the flesh of what it is to ‘fall’. Following these two tracks of opening intensity is a remix of St Lucifer’s ‘Suffocate’ from AnalogueTrash label mates PreCog, pulling together blistering beats with violence-tinged vocals for a floor-filler of the filthiest kind.
Finally, The Rodney Cromwell Mix of ‘Bathyspheres’ takes an intense St Lucifer track and maximises the mystery with an echoing post-pop sensibility, leaving the listener reflecting on this EP’s crash-course in digital-age struggle-meets-survival. The album, Music Is Violence, is released on the 22 November.