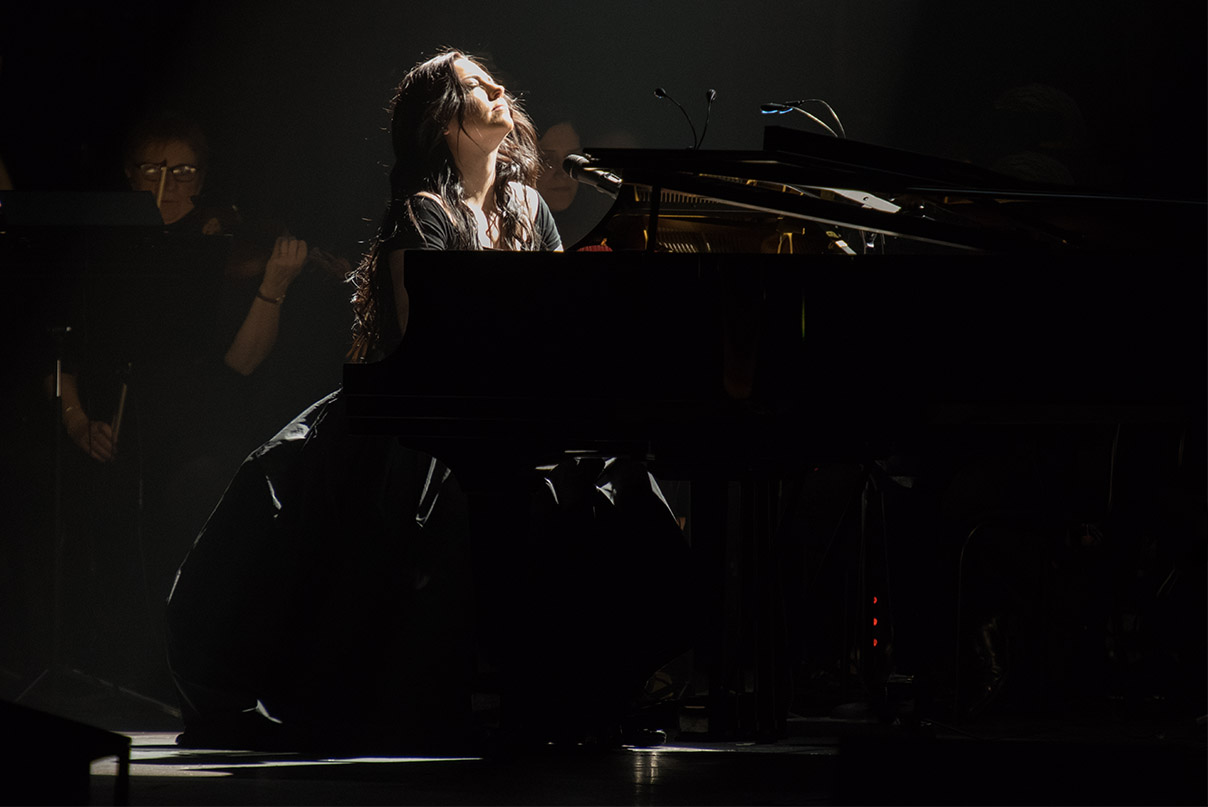 Bringing their work on the Synthesis album to life with an orchestra, Evanescence follow up a a two night stand at London’s Royal Festival Hall with a trip to Manchester ‘s O2 Apollo.

The merger of rock with orchestra can be a double edged sword. One side cutting and sharp as a pin, the other dull and blunt. While Emerson, Lake & Palmer may have experienced the disasters of ambitious orchestral tours in the late seventies and Metallica’s S&M didn’t quite hit the spot, there have been plenty of bands who’ve successfully dreamed it all up again while even more have tried. From Opeth to Anathema to Yes and Deep Purple and most recently Foreigner and Evanescence, it seems an itch that at some point needs a damn good scratch. 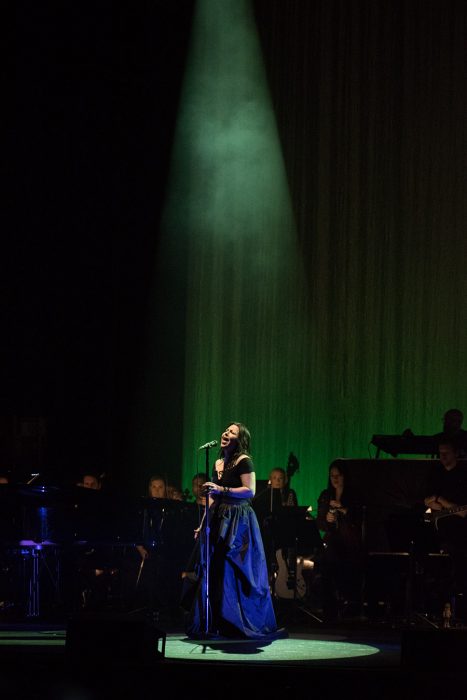 Evanescence are a band who’ve always tended towards the symphonic , their Synthesis album bringing vividly to life what they call re-imaginings of existing material with favour falling on the successful side of a fine line, although some baulked at the stripping out and softening of some of the harder edges. Of course, Evanescence have always erred towards to grandiose and symphonic so the Synthesis album wasn’t too much of a departure while the live experience proved a hot ticket. So how did the translation to live performance work?

An opening half hour set  showcased a large orchestra, one assembled locally to avoid the necessities of touring with such a large group. A touch of Beethoven and Mozart alongside Amy Lee’s Sally’s Song and Zelda’s Lullaby got them suitable warmed up before Amy Lee emerged resplendent in rustling  taffeta gown to front thirty plus musician onstage. While three electric guitars that to be frank, barely made much of a difference, the drum and electronic keyboards added a touch of rock theatricality and an edge to the combination of delicate and grand orchestral sweeps, this was the Amy Lee show. It may have been the Evanescence name on the ticket but as she stood centre stage, flitting between the spotlight trained on the piano stool and her vocal mic, there was no way anyone else was really going to get a look in. 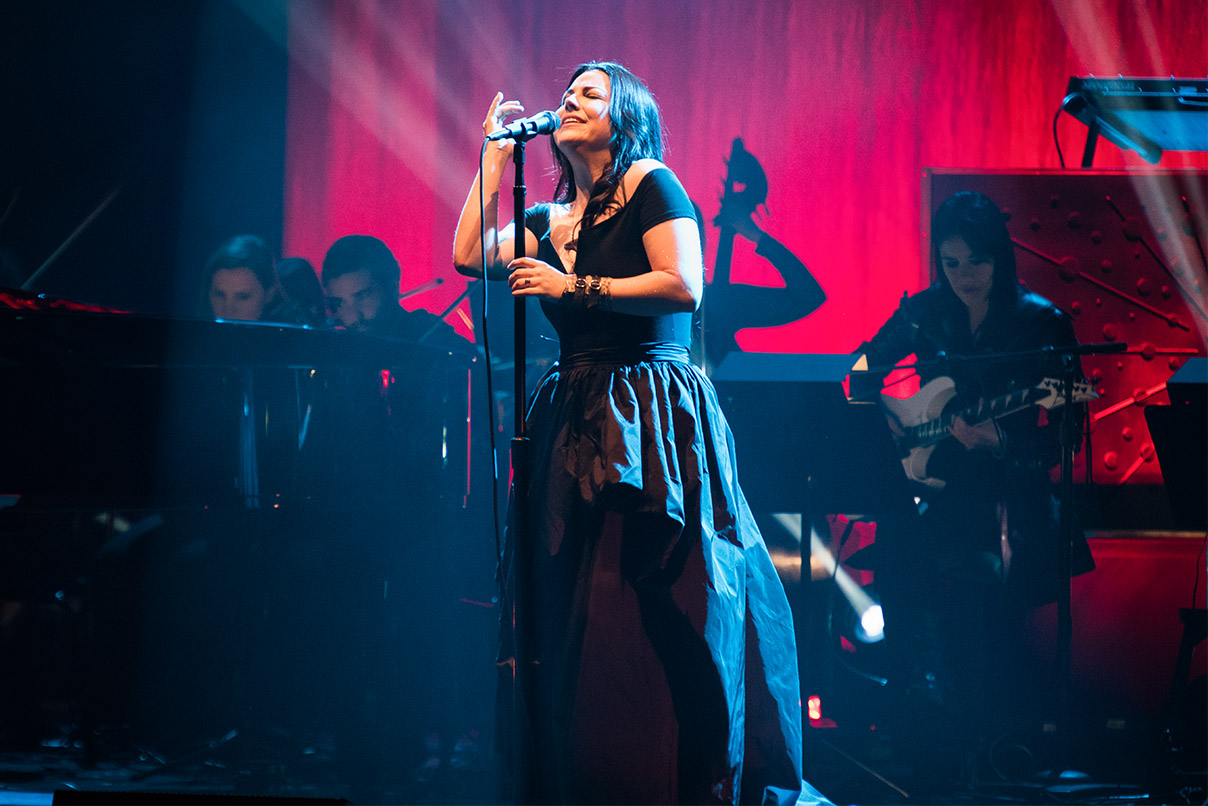 Packing in enough passion and angst to generate sufficient electricity to power a small village on the Cheshire borders and do some serious harm to a few battleships, she both powered and serenaded her way through the Synthesis material. Regular declarations of love from the sell out Apollo  – “we love you Amy!” – only served to encourage others to share and declare their devotion during an intensely operatic performance that may have been more at home in the grand classical confines of the Bridgewater Hall. My Heart Is Broken and Bring Me To Life typified the full drama where the full orchestra delivered depth discharges of brass and  swung into full force as the setlist sequenced the  material in to emphasis the musical contrast and dynamics. The modest and reflective moments of Unravelling evolved into  a surging  Imaginary with a similar pairing in the The In-between/ Imperfection segue, sweeping lights adding a sense of production to the spectacle.

Prior to a by comparison, low key encore, My Immortal was introduced as a special song that’s become a rite of passage, one that cements the strong connection between Lee, her  fans and their journey. It also proved   one that could easily be swamped and dip  below the radar in an understated performance yet be the one that symbolises the impact of the orchestral Evanescence.

Words by Mike Ainscoe You can find more of Mike’s writing on Louder Than War at his author’s archive. He can be found on Facebook and his website is www.michaelainscoephotography.co.uk