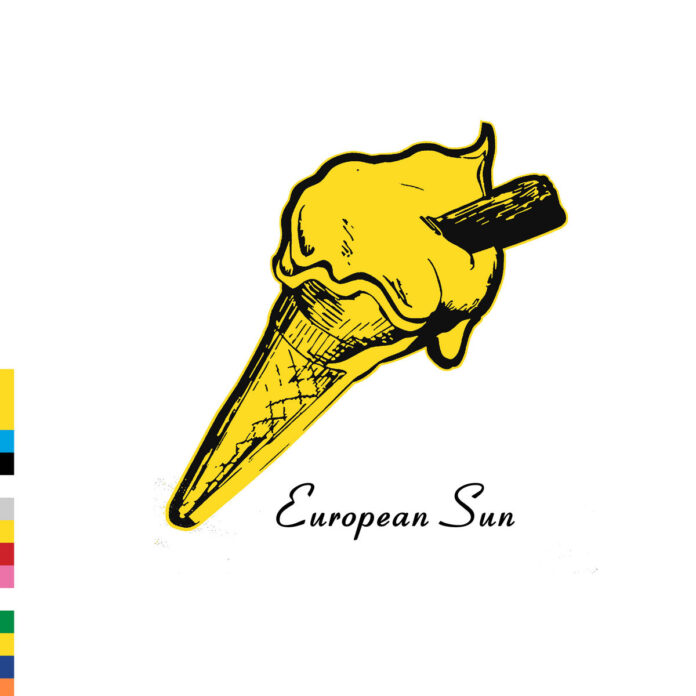 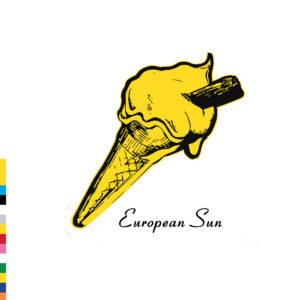 European Sun are seemingly another Amelia Fletcher and Rob Pursey band in addition to Catenary Wires and Swansea Sound – but it is mainly the work of Steve Miles – this is his life and outlook in song.  Just don’t mention the word ‘twee’ – this is punk rock openheartedness personified says Ged Babey.

I don’t think that I, or indeed anyone, could persuade your average self-identifying ‘punk’ that this is probably THE MOST Punk Rock Album there is in 2021…. but it is. It breaks rules and sticks to long-held notions.  It’s quiet when it could roar. It’s polite and gentle when it could stick up two fingers. It’s not the sound of youth…. it’s the sound of hard-earned wisdom and utopian belief.

When you have two friends who formed Talulah Gosh in the 80’s and Catenary Wires more recently, it is them you go to for assistance with recording and releasing your debut album.

Steve writes the songs and me and Amelia produce and arrange them is probably the best way to describe it. All words are his. Chords are written by him, but we play the instruments. It was the first record where we’ve taken that role. I’ve known Steve since we were at school together. He was someone I loved taking to and I knew he could write, but it’s only very recently that he’s really engaged with his own talent and ability.

Steve Miles is I guess in his late 50’s. He is a gentleman with the emphasis on the gentle. (What e.e. cummings called an intelligentleman).  He was in a band called Modesty Blaise in the 80’s and has four daughters.

In Dreams Begin Responsibilities is the title of essays on music written by Steve for Pennyblack music.  They are utterly brilliant. Long, detailed, personal… definitive accounts of one mans journey through punk, music and beyond.

In the first two he lists 10 representative songs which for him, define punk and he articulately explains why.  The artists are:  Jonathan Richman & the Modern Lovers, Peter Laughner, the Raincoats, Alternative TV, Buzzcocks, Desperate Bicycles, The Radiators, Teenage Filmstars and the Mekons…. so, not your cliched, obvious choices.

It is some of the best writing on ‘punk’ I have ever read.

The eponymous European Sun album is maybe an amalgamation of his influences: There is the observational childlike wonder of Jonathan Richman, the stark directness of Patrik FitzGerald and the off-key plaintiveness of Dan Treacy.  Musically the minimalism of Young Marble Giants meets the classic feel of the Velvets. The positivity of Richman set against the self-doubt of Buzzcocks and the songs dig deep into his past.

The songs of childhood are balanced out with songs about being a parent. My Friend Robin sees the narrator meeting and looking for advise from Robin Hood (I find it so hard being a man, let alone being merry…) Prince Hamlet (Your dad was a king, mine left school at 14…), Van Gogh, Emmaline & Sylvia Pankhurst and Robert Johnson.

Never Too Old To Be Young goes into 50’s doo-wop style.  Whilst The Robin has the quiet calm of Young Marble Giants.

The album is full of sweet songs of innocence and regret, but the delivery can be a bit of a distraction.  The tracks with a ‘spoken’ section are far more easily accessible than the ones with an off-key vocal.

The content critical of the establishment, government and greed is beautifully couched in fragile vocals and nicely discordant guitar (So Small).

The epic Small Steps is an album highlight:- cool bassline and needling guitar. The spoken section is a fantastic piece of writing going back to his days as a shy but angry young man, when, naively a t-shirt slogan was the bookish rebels Molotov cocktail.

A kitchen-sink retelling of Lou Reeds Perfect Day with melting ice-cream and sand in your Pringles, called Favourite Day will be a winner with fans of Amelia Fletcher (if only for the way she sings la-la-latte..).

The bonus tracks on the digital edition Hugs and My Station are to my mind two of the best songs. The latter incorporating rail-booking system error messages into the lyrics: Outward travel must not be in the past.

Now I’m Ready To Be A Princess is however the centrepiece of the album. Self-doubt, self-analysis and self-realisation in a musical-box tune. The perhaps too obvious interpretation is that it’s about someone coming out of the closet in later life. But I don’t think it is. It’s more about finding yourself and being happy in your own skin, having the confidence to say, form-a-band and express yourself when you’re ‘old enough to know better’.

Hugs is a similar scenario – the video makes it perhaps more twee than was intended – there is a layer of knowing irony – but Steves spoken section is as from the heart as you can get.

European Sun have made a lovely album.  It’s sweet and bittersweet. Clever and knowing. Open-hearted, warm-hearted and it wants to be loved – or at least appreciated for what it is.  Honest, home-made and true.

It’s not perfect, but few things are. Real punx will laugh and kick sand in it’s metaphorical face – but that’s only to be expected. But this is an album for the few that always saw punk as a means of expression with one golden rule – no rules at all – which meant Jonathan Richman, Devoto and Dan Treacy were as important as Rotten, Weller and Strummer.

European Sun play their first ever live dates, on tour with Catenary Wires, starting on Friday 3 September 2021 -see poster below 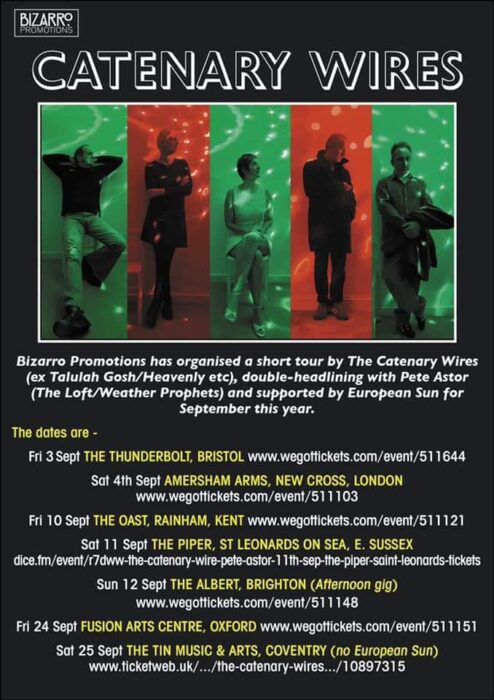