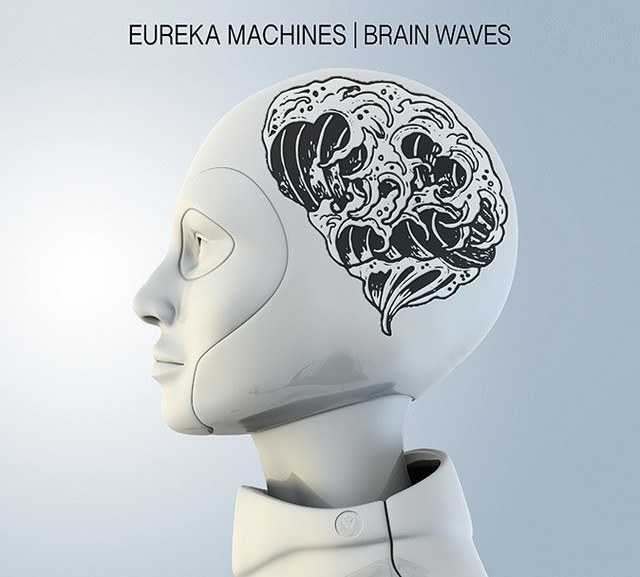 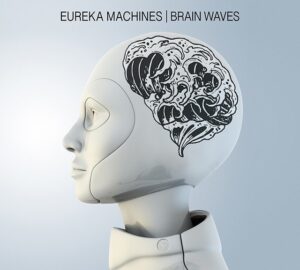 Eureka Machines release their fourth album Brain Waves, but it is it their Archimedes moment? Louder Than War’s Martin Haslam reviews.

Ah, nostalgia. “For an age yet to come”, so said Pete Shelley some years ago. Bear with me; it’ll make sense! Firstly, ‘Brain Waves’, the fourth album by Eureka Machines and second via Pledge Music, looks, and, to an extent, sounds like an idea of the future, but from our childhood (I’m 47). The artwork by long time collaborator Rich Jones has bravely moved away from previous band-orientated shots, encompassing a sleek, futuristic look and tone. The dummy/robot head combined with brain tattoo mirrors the album’s running theme of the strain of trying to be an adult in the modern world; emotional dislocation; paranoia; insomnia; depression; struggling to achieve a balance. Dark thoughts for Eureka Machines, but with a typical cornucopia of hooks, tunes and BIG choruses. They even have a mini-site for the album which is beautiful (www.eurekamachines.com/brainwaves).

Secondly, Eureka Machines are the reason I am writing for Louder Than War; I loved ‘Remain In Hope’ soooo much, my first tweet was to John Robb, asking when he was going to review it/interview the band. His prompt reply was “it is great, but I’m busy. Why don’t you?”. So, shortly after, I’d done my first album review and interviewed Chris Catalyst. Thanks again, Chris.

So, two years later, here’s album four. High expectations for their fans, but we know what they are capable of. Let’s go…

‘Paranoia’ is a simple album opener; riffmungous, frenetic and with a clear lyric; force yourself out of the rut and harness your potential, however hard it may be.

‘Television’ is another ludicrously catchy tune to pogo to at their next gig, or in the lounge to two confused dogs. The pros and cons of losing yourself in the idiot box, set to a melody that reminds me of the great Sir Willie Dowling; a good influence.

‘Sleep Deprivation’ has plagued Chris at times. I’m pleased to learn that ear plugs seem to be his solution. “Insomnia serves to ruin your day by giving you a free extra night you never wanted in the first place”. The first track to have the ‘classic’ Eureka Machines sound. If you love ’em, you know what I mean. Excellent.

‘Brainwaves’ says “embrace the normal while enjoying the weird” to a lush multi-layered chorus. They initially promised a simpler, more stripped-backed album this time, but I think we knew that would change once they got into the studio. However, they are that rare band who also pull it off live without losing the impact of the song.

‘Human’ whacks you with another frantic riff, while reminding us of how ridiculous the human condition is and that we’re better off avoiding the archetypes of perfection. We’re flawed and doing our best. That’s enough.

‘Every Day I Thank The World I Cut You Off’; the struggle for self-awareness; overcoming depressive episodes and depressing people. A tune that branches out, almost woozy sounding in places, a little reminiscent of Cardiacs, to these ears at least.

‘Welcome To My Shangri-La’ is one we Pledgers are familiar with now. This is already awesome live; great opening riffs. Yes, I know; more riffs! While this album is more expansive than previous ones, the fan of the riff will not be disappointed. Actually about recognising your misery for what it is and not wallowing too long.

‘The Golden Lonely’ is, well, lovely. The loneliness that only money can buy. Less is, often, more. I often play this one on repeat, beautifully melancholic.

‘Vulture Of The Culture’ has a chorus line a little close to ‘Champagne Supernova’, but faster and with that indescribable EM something. Not litigious! “The irony of a failed musician telling a successful one what they should be doing”. Know what you are, what you stand for and keep on doing it. You know yourself best.

‘Neuro Bolero’ is another song that opens by sounding like Eureka Machines; as soon as I hear it, I know I’m in safe hands. EM are well known for not wanting a boundary between band and audience; no egos, no encores, no flaky behaviour. Which is part of what this is about. And why I love them.

‘I Miss You’ is a highlight, possibly a career highlight. “Part of standing tall is learning how to fall”; missing the maelstrom of emotions that may threaten to overwhelm us but which also enables creativity. Not a conventional love song, then. But still gorgeous.

‘We’re Going To The Future’ is very simple and an anthem of positivity for everyone. Move over ‘Zero Hero’, this should be the climax to the gig; I can see the crowd bouncing and singing as one. “Yeah, yeah, yeah, yeah, we’re all gonna win…”

I’ve waited a while to allow this album to bed into my consciousness before reviewing, as ‘Remain In Hope’ was a milestone album for Eureka Machines. They’ve been brave in knowing that there was a need to expand their sound without losing their personality and have pitched it perfectly. Just buy the damn thing.