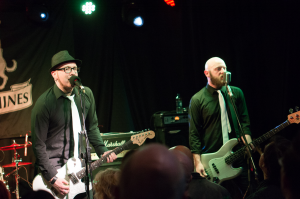 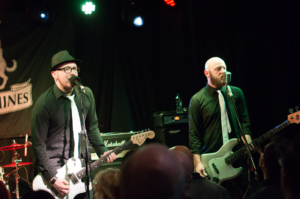 How important and valuable is live music as a force for good? It’s priceless. Ever the good guys, Eureka Machines show us how.

Everything suddenly changes, yet everything stays the same. It sounds better in French, as do most things. Never underestimate the power of music to bring people together and remind us all, if only briefly, that life should be celebrated.

Eureka Machines are exactly what I needed tonight. They have nurtured a community spirit at their gigs for some years now, and it’s reassuring and comforting to be part of. It’s more than “we like the same band/wear the same t shirt”; it’s an understanding that we look out for each other and have mutual respect. You meet old and new friends at EM gigs and can talk to anyone without feeling odd. The band are as ego-free as you can get, which is why there are never any encores; no posturing or clichés. It’s helped to make every gig special.

Our journey meant we only caught the end of The Role Models’ set, which was annoying, as I reviewed their great new album ‘The Go-To Guy’ recently, but I expect they were excellent as usual (see my live review at Camden Blackheart).

I’d also seen Tropical Contact supporting EM at Leicester earlier this year, so knew they’d put on a good show. They are incorrigible rock puppies with some good tunes; newie ‘Warriors’ sounding amongst the best tonight. Their Pledge Music campaign for their up coming album is now up and running. As in Leicester, they show their appreciation to Eureka Machines for being “the best band ever” to take them on tour. They give it everything, in spite of using a sock on the mic to avoid potential shocks.

The sound problems continue, but nothing, nothing, stops Eureka Machines from delivering a set full of passion, tunes and fun. They are dedicated to showing us a good time, and, in said spirit, I forget the set list and sing along to every song. And bounce a lot. This really only happens at their gigs, for me at least.

I do remember they started with ‘Paranoia’ as they did earlier this year, but second up was new song ‘Us Against The World’, soon to be available on the ‘Rarities’ album. It’s great, but odd that I don’t know all the words yet.

So many of my favourite songs are played tonight; ‘Pop Star’, ‘Being Good Is O.K (But Being Better’s Better)’, ‘Brain Waves’. At the moment, for me, ‘We’re Going To The Future’ is a live highlight, almost eclipsing the mighty ‘Zero Hero’ as it is so simple and beautifully optimistic, with the added end line “we’ve already won”. And it does feel like a victory. We’re celebrating in a simple but powerful way tonight; we are the underdogs who want everyone to win. It’s a beautiful thing. 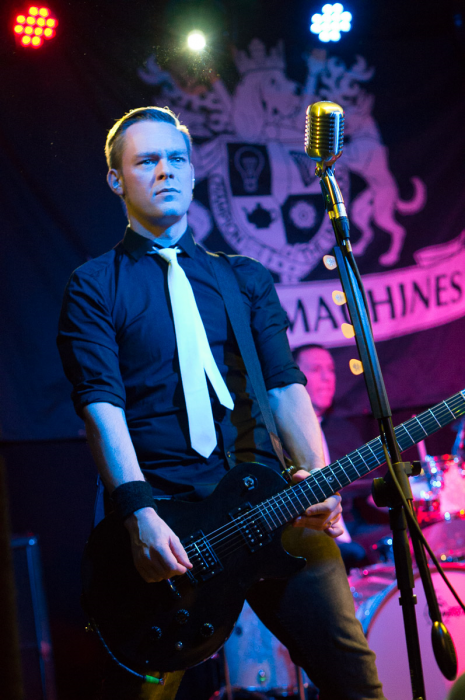 Special thanks to Nix for being her warm, welcoming self and providing a vast array of lovely cakes (yes, we get spoilt at EM gigs), the band for being excellent chaps as ever and the staff/Rhys for ensuring that Nick was looked after while unwell; get well soon. Oh, and anyone else who knows me, Ken. See, we really do look after each other. Eureka Machines; more a way of life than a band.

Photos by James A Grady.