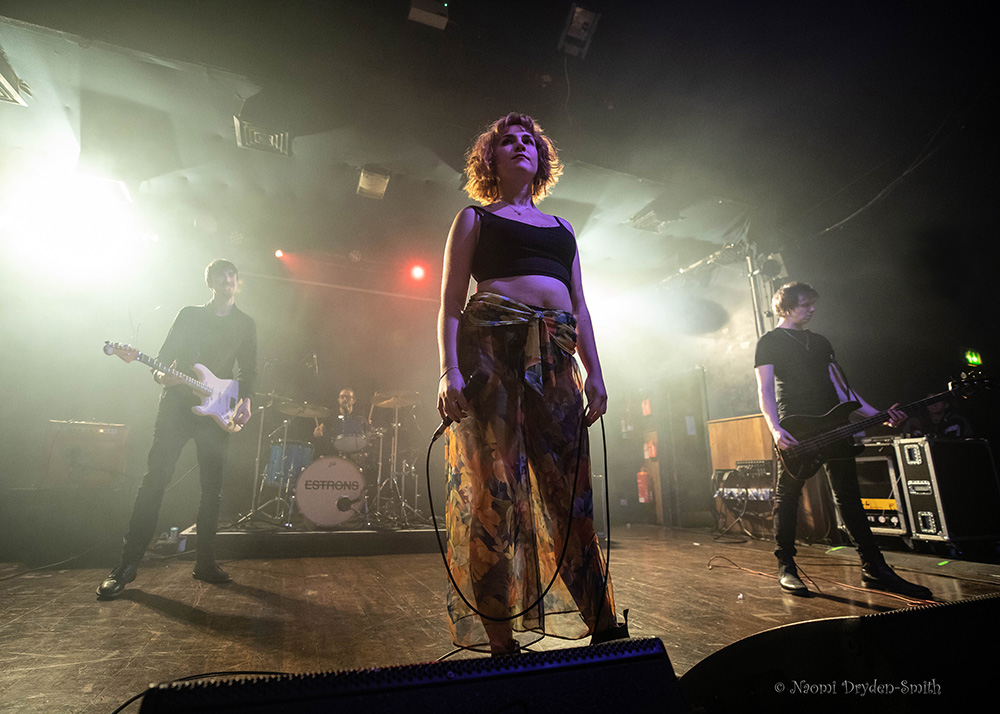 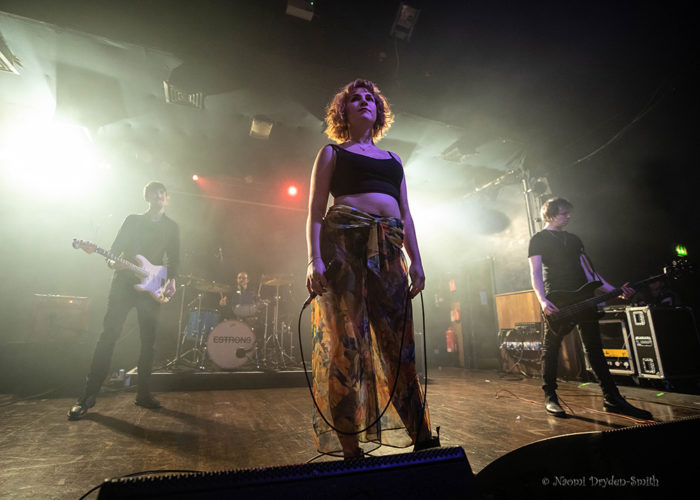 Estrons brought their You Say I’m Too Much, I Say You’re Not Enough Tour to London. Playing their biggest headline show in the capital to date, Louder Than War’s Andy Duke was on hand to take in the noise and their performance strangely reminded him of the 1990s film Single White Female.

Estrons’ lead singer, Tali Källström, is a liar. “We’re just a simple band from Wales”, she informs the capacity crowd at The Scala. The reality, however, couldn’t be further from the truth. Although based in Cardiff, the quartet’s interest straddles two continents and their charismatic figurehead draws on her unique and often dark personal experiences, including being in police custody, for inspiration. Add into the equation a refreshingly direct yet highly entertaining stance on feminism, as seen in last year’s Making A Man video, and what we’re presented it with is anything but a simple musical ensemble. They may appear down to earth, and proudly embrace the DIY ethos, but theirs is a rich and complex blend of angst, rock, punk and pop. And this far-from-simple outfit truly come into their own live.

Beneath blood-red light and with the sub bass boom of Mclusky’s Provincial Song filling the venue, Estrons quickly make their way to the stage and kick off their set with Lilac. This energetic track showcases a musical chemistry that packs sonic might and catchiness in equal measure. Källström’s vocals are an outstanding force from the outset and cut through the trio’s relentlessly powerful instrumentation like ANFO industrial explosives in a Welsh mine. Whilst leaning towards the more rocking end of the musical spectrum live, this is a band who embrace a melodic top line with Källström’s varied delivery offering many different shades and feels across their 12-song set. From recalling a hybrid of Dale Bozzio from Missing Persons and early Lena Lovich on Body to summoning her inner-Skin from Skunk Anansie on Jade, there’s a reason why reviewers struggle to pigeonhole this lot. They like to do a lot of stylistic pendulum swings. Yet, to my ears, it’s never at the expense of their very individual character. 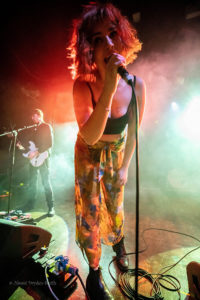 Halfway through their set, the group scans the sold out room and both Källström and guitarist Rhodri Daniel describe the first time they played the capital three years previously. “There were just three people there. All friends of ours”, exclaims Daniel. “And some of them left even before we finished our set”, adds Källström. With international tours and support slots with the likes of Garbage behind them, to say the band’s fortunes have changed since their less than ceremonious debut a mile up the road at The Social would be an understatement.

Introduced by Källström as “the band’s best song”, Estrons launch into Strangers. This lighter offering is catchy. And it’s a track that Gwen Stefani would have been proud to have penned and belted out during her tenure with No Doubt. But it’s by no means the musical ensemble at their strongest. In fact, with such a consistent and well-honed set to capitalise on, this group hasn’t really got a ‘best song’. Which is a high-class problem to have.

Throughout all the genres they inexplicably skirt across with ease, the musicianship on display is solid, dynamic and hits you in the chest like a rugby player from an opposing team. Donning a white Stratocaster, southpaw guitarist Rhodri Daniel delivers arena-filling sounds in a club setting. Perhaps it’s a Welsh thing but there’s a sensibility and tastefulness in his playing that recalls Dave Evans (AKA The Edge) circa U2’s War Album. And, before my Celtic brethren and sistren berate me for ignoring Bono’s partner in crime’s Irishness, those in the know will be aware that The Edge was born to Welsh parents a mere 40-minute tube journey away in Barking. In addition to a love of delay effects, Daniel also brings a percussive and angular approach to the six-string that evokes Johnny Greenwood from Radiohead circa The Bends. Add into the recipe a bit of Simon Neil from Biffy Clyro thrown in for good measure, especially when Estrons get raunchy, and it’s not surprising that the band are blessed with such a big and exciting guitar sound. Anchoring that top layer, and filling rhythmic space where you’d normally expect another guitar to cover the void, is bassist Steffan Pringle. Armed with a low-slung Fender Aerodyne Bass and a tighter-than-cramp plectrum style, there’s a reason why it sounds like this band has two guitarists and Pringle is his name. Keeping the beats exciting and foot stomp-inducing is Adam Thomas’s drumming. Balancing the heavy with the melodic is not an easy endeavour and Thomas, alongside his musical partners in crime, effortlessly change moods and urgency levels while constantly serving the vocals of which Daniel and Pringle both contribute to great effect. 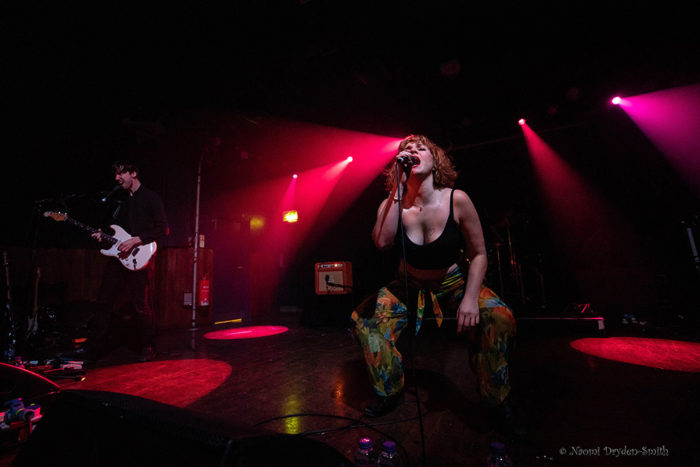 Showmanship, or rather showPERSONship, is a strongpoint with this foursome. Källström isn’t afraid to get close to her audience and provides eye contact that is more akin to a theatre actor than a rocker. This is a very welcome thing. In an age where our frontmen and frontwomen feel decidedly identikit as of late, it’s novel to be reminded of giants from the thespian world rather than rock legends both past and present. And, were someone to make a film of this band, I’d get a time machine and recruit Single White Female-era Jennifer Jason Leigh to portray Källström. In addition, Daniel, the band’s co-founder, covers every inch of his side of the stage ten times over through the set. And he isn’t averse to climbing up the PA rig to put his Fender through its paces up in the heavens during the band’s closing number Drop.

Despite all of the bravado and confidence that Estrons exude, there’s a likeability factor that all the members ooze. One gets the idea that, in addition to loving what they’re doing, that this is a unit who genuinely enjoy being in each other’s company. In addition, they’re also appear incredibly grateful for the support they receive. And long may it flourish and grow. While they continue to spread their music across the planet, however, Källström just needs to realise that Estrons are in no way a simple band.

Watch Estrons’ fantastic video for Making a Man here. Please note that NO LAMPSHADES were harmed during the making of this promo.

Buy or Stream Estrons’ latest album, You Say I’m Too Much, I Say You’re Not Enough, here