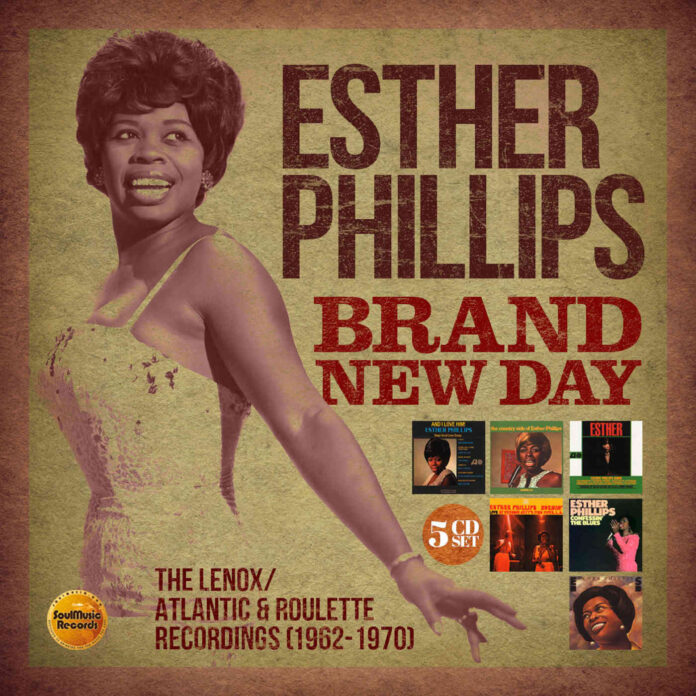 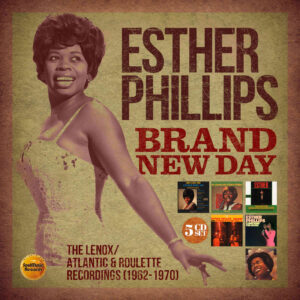 New 5CD which brings together all of soul/r&b singer Esther Phillips’ recordings for the Lenox, Atlantic and Roulette labels…..LTW’s Ian Canty hears jazz, blues, slick country pop and above all the fine voice of a fallen child prodigy with an unlikely guardian angel in Kenny Rogers….

By the time of the first recordings featured on Brand New Day, Esther Phillips, born Esther Mae Washington, was already a 13 year veteran in music by the very young age of 27. She was only 14 when she won a talent contest in the presence of bluesman Johnny Otis. He was suitably impressed by the youngster’s abundant talent and quickly got her signed up as part of his touring concert revue. Quickly she made several successful recordings with the Johnny Otis band, billed as Little Esther due to her youth, with the Phillips name being picked by chance. She scored a large number of R&B chart hits in an unprecedented manner for a young female singer in her first year in the business. Phillips decided to part ways with Otis at the end of 1950, something which would spell the end of her run of hits and instead usher in a marked decline.

Unfortunately Esther had developed a drug addiction during the hard work on the road and the pressure of trying to recapture the magic of her Otis-backed hitmaking year. This was something that would blight her health for the remainder of her life. Towards the middle of the decade she moved to Houston Texas, living with her father in order to help her recovery from the dope sickness that was slowly ruining her life. The big hits of her triumphant debut year recording seemed a world away from the small-scale singing engagements she now had to take to make ends meet.

Many years followed with frequent hospital visits to help deal with her spiralling addiction, a decidedly lowkey performing career taking second place in the quest for health. In 1962 though, enter the Rogers brothers. Singer Kenny, a Houston native, caught one of her gigs and saw that her untapped potential was still shining bright. With his brother Lelan at the time heading up the Lenox record company, Kenny set about persuading his sibling to sign Phillips up to a deal. With this she took the initial steps in rebuilding her singing career after a lengthy period out of the spotlight.

The first disc of Brand New Day begins with those Lenox recordings which signalled Esther’s comeback. Subtitled ironically Am I That Easy To Forget? after the Carl Belew/W.S. Stevenson tune that was a minor hit single for her, this platter ends with four early recordings she made for Atlantic when signing with them later on in 1964. The Lenox tracks have a real C&W feel and song selection and in the main came from an album that was not unreasonably named Little Esther Phillips: Reflections Of Country And Western Greats. The adoption of this sound proved pretty successful for Esther, helping to re-establishing her back near the top end of the r&b charts.

She was still using the Little Esther tag at this point, but there’s nothing diminutive about the ambition and production here. On occasion the massed and slightly overblown backing vocals threaten to send the whole thing over the top into parody, but Phillips more measured tones manage to reign in the more schmaltzy touches. Her take of the much-covered Release Me was her biggest ever hit single, topping the r&b chart and reaching the top 10 on Billboard too. (Don’t Put) No Headstone On My Grave has real sass that lifts it and this and the gospel soul tinge to the sorrowful Why Should We Try Anymore stand out.

The first items Esther recorded on signing to the larger Atlantic label show a change of emphasis away from country and more towards jazz and rhythm and blues. This also had the advantage as being slightly more in tune with the zeitgeist of the time. The Andre Williams/Clarence and Barbara Paul effort Mo Jo Hannah is given a fast moving workout and smart duet with Jimmy Ricks On Double Crossing Blues has Esther trading lines with him in a way that seems wholly natural and above all fun.

By disc two of this set we are firmly in jazz blues ballad territory. A pleasing touch of class is applied throughout and this style suits Esther just a touch more than the c&w at least. Her kind of clipped delivery here, somewhat like a less stylised Eartha Kitt or a more restrained Randy Crawford, hits the spot with the big band arrangements. Covering the Beatles number And I Love Her as And I Love Him was a masterstroke. The Fabs themselves regarded it as one of the best covers of their songs at the time, which even back then covered a fair amount of ground. They also invited her over to the UK for some live dates.

A playful flute helps make the 20’s song Makin’ Whoopee fresher and Phillips draws out the earthy subtext well. The straight pop drama Let Me Know When It’s Over may have missed the charts as a single, but this was still a sterling effort. It’s odd to hear her do As Tears Go By with the number so tied into Marianne Faithfull, even so this is a decent attempt and the trombone frills on the Moonglow/A Theme From A Picnic add to an attractive melange of sound. A lot of this disc is fairly standard, exquisitely sung jazz/blues which is enjoyable, though I do feel that Esther was still being presented as a middle of the road act at this time when she had a lot more to offer.

This sound continues to dominate for the opening segment of disc three. Like her Beatles cover, she changes the sexes of Percy Sledge’s When A Man Loves A Woman, which works pretty well with a “church organ” setting the tone. Try Me is another cool blues offering and the lovely warm organ drift of When Love Comes To The Human Race is a delight.

The last part of this third disc are the sides that Esther Phillips cut for the notorious Roulette imprint at the end of 1969. Some of the best and most diverse tracks she recorded in the 1960s are included, with Cheater Man’s psychedelic soul a real stunner and proof what she could do outside of her jazz/blues comfort zone. It is excellent and is followed some great material including the handclapping and stomping pure soul of Watch Dog and the driving r&b of Too Much Of A Man (To Be Tied Down).

The fourth disc of this set is essentially an extended version of Phillips’ 1970 Burnin’ live album, a record that returned her to the lower reaches of the US Billboard chart as well as scoring higher up in the r&b and jazz rankings. Four further tracks also taken from the same gig on 31 January 1970 at Freddie Jett’s Pied Piper Club open up the final disc too. Here Esther was supported by a trio of pianist Jack Wilson and a rhythm section consisting Ike Isaacs And Donald Bailey. Though overdubs were added, the small combo actually works in Esther’s favour, helping to give a close up and intimate experience. The relaxed atmosphere really helps her fly.

She nicely revisits her big records And I Love Him and Release Me here and gives number of standards new life. For me this is the single most enjoyable disc of the set, being sultry, seductive, frequently funny and excellently realised. Esther sounds relaxed and in control, with the band, whether or not they were enhanced by overdubs, almost always hitting the right note (wobbly piano on And I Love Him apart). The medley of Blow Top Blues/Jelly Jelly Blues and Long John Blues never made the album proper but provides a fitting climax here. It is a little sad though hearing Esther sing “I got so high last night” when her ongoing drug problems were flaring up again in her private life.

The final offering of this set has those four live numbers which are good, with Feel Like I Wanna Cry having the desperately sad lyric being sent up a bit by Esther. It is lovely to hear someone who is looked back on as being a troubled soul joking and having a lot of fun with the receptive audience. The latter section of this disc is given over to further Atlantic recordings which made up the belatedly released Set Me Free album. There’s a lot of good stuff here too, like the “funky Procul Harum” Brand New Day itself and the very fast and danceable soul of Catch Me I’m Falling.

After these records she had further success in the disco era with her Capricorn Princess album (reviewed here) and associated singles. The damage the years of addiction unfortunately told though and she passed away at the young age of 48 in 1984.

Brand New Day is a very well put together set with the usual in depth history of the recordings. I have to say for me it really took off halfway through the collection, with the fourth and fifth discs being consistently enjoyable and some fine and funky single sides in the second part of disc three. Esther Phillips is usually seen as someone who squandered that early potential with her addiction issues, but on this set it becomes clear that she still produced a fine body of work despite her problems. Remember her on stage on the Burnin’ album, enjoying just doing what she did best.