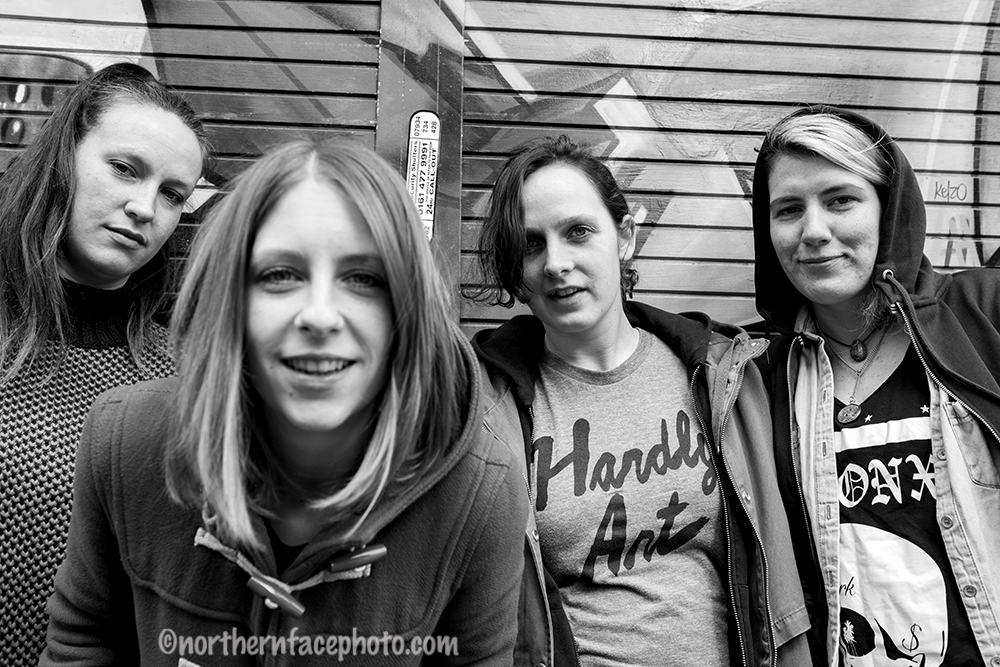 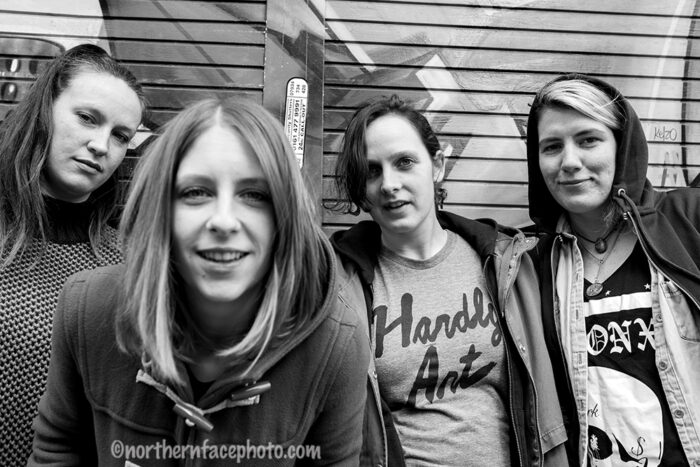 Esper Scout are a collection of Manchester musicians based in Leeds.

I said my previous Placebo article that there are some bands that I would see again and again, Esper Scout are one of them. Different from most other Indie groups on the circuit and quite experimental, the music is dark, searing and complicated with stop start verses and choruses brought to life by Sarah’s amazing vocal delivery. They are playing at the Bangkok Bar on Princess Street in Manchester. A slightly odd venue with a Thai restaurant downstairs and bar/gig venue above.

When I first saw Esper Scout at The Castle in Manchester’s Northern Quarter last October they had just released the single Belay c/w Carpet Of A Crest in vinyl on Bomb the Twist and Kill Rock Stars (Digital US) in the States and were selling copies on 7″ at the gig. They played a storming gig that night, the experience being enhanced by the intimate atmosphere of the small but characterful venue. You can read a short summary of it here.

Things have changed a bit since then, Lou, the original drummer, (and incidentally the only member of the band from Leeds),  has been replaced by Abbi who has been gradually learning all of the songs so that she can now complete a full set.  I saw them play at The Fall’s movie event at the Brudenell Social Club a few weeks ago and the set consisted of just four, well rehearsed songs. The band now gel together really well, Abbi has slotted in perfectly and she is a bloody good drummer; you need to be in this band.

They open with Assumpta Tang, a slow brooding number that builds into a beautifully melodic song where the singer can really show off her vocal. I find that the ceiling in this venue is really low and the acoustics aren’t the best, also the sound engineer hasn’t got the balance quite right, the vocals are low in the mix which is a bit of a shame, she does realises this and tries to fix it but they still remain rather quiet. Next up is Belay and Carpet of a Crest and things are beginning to hot up. There are some guys in the audience who had played earlier as ‘Omit Sleep’ and ‘Dirty Flowers’, one of them with a with painted face, Aladdin Sane style, and long hair looks like 60’s madcap Arthur Brown; he’s dancing wildly in front of the band with complete abandon, totally freaking out!, just brilliant and It’s the first time I’ve seen the audience get really excited watching this band, a  testament to the quality and intensity of the music.

They whip though In Foreign, introduce a new song, STS before finishing up with Fires and the set just flows brilliantly. Everyone in the place is packed on to the dance floor in front of the small stage trying to get a closer look and with the crazy dancers it feels like a real party atmosphere.

They went down an absolute storm! the band themselves were dancing along with their instruments during the final song which is no mean feat for Rebecca who’s bass guitar is nearly as big as she is! (Sorry Rebecca!)

They are back in Manchester on August 15th at The Blue Cat in Heaton Moor, so put that date in your diary,  this is not a band you are going to want to miss!

Belay / Carpet Of A Crest now available on CD at Bandcamp.

Photo by David Gleave. More from David can be found on Flickr or his personal website: www.northernfacephoto.com

All words by Nigel Carr. This is Nigel’s first post for Louder Than War.