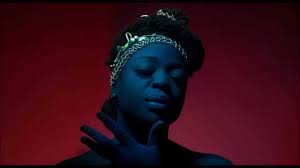 Described by BBC Radio 6 Music’s Gilles Peterson as “the finest UK singer”, by The Guardian as “enchanting… inventive” and The Independent as “one of the most idiosyncratic and original talents”, Zimbabwe-born, London-raised musician and songwriter ESKA took five years to make her album – “a mind-bending gem” (The Observer). ESKA’s self-titled debut album was released in April 2015 on Naim Edge Records. Subsequently nominated for the Mercury Prize 2015, Louder than War did a Q&A with ESKA after she was nominated to see how her week (and year!) had been.

LTW: Hi ESKA. How has your week been?

Full of wonderful challenges; discovering new pop-up books in the library with my daughter, a couple of live performances (one in London, another in Spain), a photo shoot plus a bunch of interviews.

LTW: I heard that you have contributed to 3 previous Mercury Prize winners? Who and what were these and what was your contribution?

On Ty’s  ‘Upwards’ album, I was a featured vocalist and songwriter.  I also featured on Soweto Kinch’s ‘Conversation With The Unseen’ and did additional backing vocal arranging on The Invisible’s self-titled debut album.

LTW: After contributing to other people’s music, what is it like to be nominated on your own?

Hopefully, it completes the narrative.  I’ve been called a ‘best kept secret’ and that’s probably more to do with my ‘behind the scenes’ work as a sideplayer and songwriter so it’s brilliant to now be recognised as an artist.

LTW: Yes it seems that your hidden hard work is now coming to fruition. But, ‘Best kept secret’ must be very flattering, and at the same time something very big to live up to? Any pressure?

Yes, I feel the pressure but I understand it to be the resistance from which I acquire creative ‘muscle’.  Hopefully, it will strengthen me for what lies ahead.

LTW: This album has taken five years to make. Tell me about your music?

The album actually took probably around 3 months in total to complete.  The process of releasing the music was far more complex; a £20,000 investment of my own money – and that wasn’t raised overnight – A&Ring the entire project, setting up my own Earthling label, dealing with legal issues and planning the best release approach for the album with included releasing the Gatekeeper EP first, touring…and then I had a baby!

LTW: Ok yes. Wow this really is your music! This is a lot of personal investment at quite a pivotal time of your (and your babies) life! This sounds like it was very iterative…was it a case of it’s now or never?

The ‘now or never’ approach to living feels void of hope. We rise, we fall, we miss opportunities but they return – sometimes in a different form but they do return.  Wonder’s arrival has only fuelled my ambitions.  She adds sobriety with a lot of humour to the journey.

LTW: On the 20th November the finalist of the Mercury prize is announced. How important do you think this prize still is? Is it still meaningful? Looking at this year’s panel (some great names there to be honest) I would say yes, but what do you think?

I have followed the Mercury’s and continue to do so because it recognises creative achievement from such a broad spectrum of albums. This is particularly significant for independent labels and independent artists like myself.

LTW: Finally, you are currently on tour promoting ‘ESKA’. What is next for you (and your little one!) What does 2016 bring?

Well. I recently received MEGS funding (Music Export Growth Scheme) in order to distribute, market and tour my album across Europe.  Thus far, it’s had a heart-warming reception so I look forward to meeting my new followers cross the pond.

LTW: Thanks ESKA and good luck for the 20th!

’ESKA’ is currently available via outlets and she is currently on tour. More details on ESKA can be found via her website, Facebook page and Twitter.