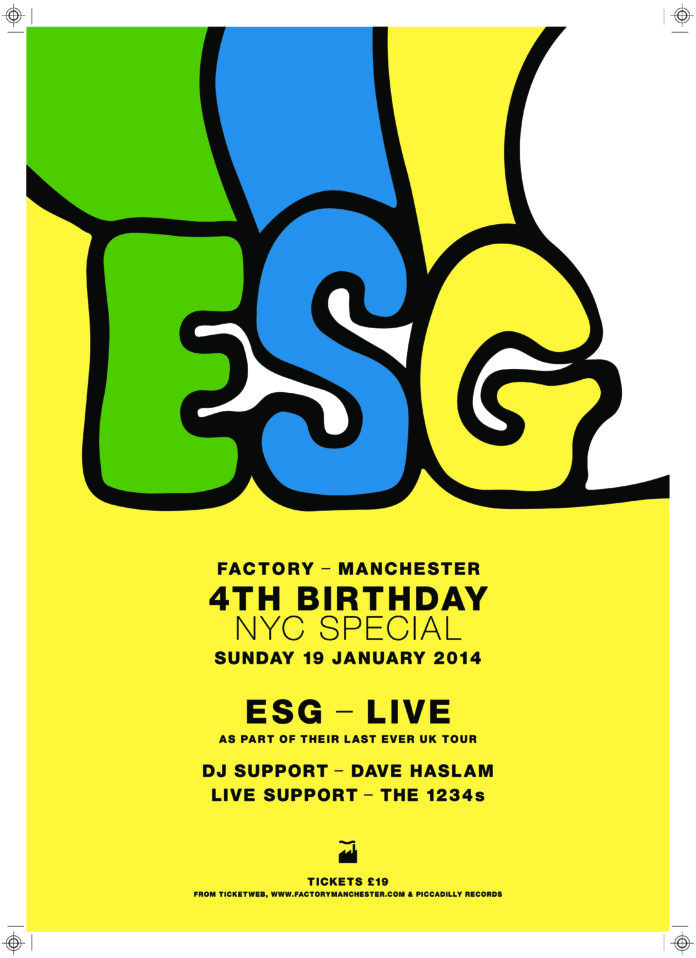 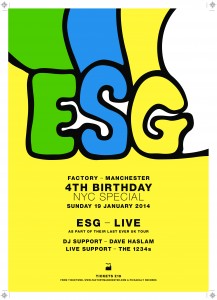 It’s Sunday night in late January and freezing cold but despite this there is a large and excitable turnout for ESG live at The Factory’s 4th Birthday Bash.

ESG are a New York band who were formed in the late 1970’s in the South Bronx by the Scroggins sisters Renee, (vocals), Deborah (bass), Marie (congas, vocals) and Valerie (drums) this final farewell tour also includes Renee’s daughters Nicole and Christelle Scroggins.

Renee half sings, half speaks with confident sass, with an almost casual off hand delivery but with a huge amount of soul. The second song in and they get the mainly young crowd moving with their well-known song ‘dance’. There is a playful fun atmosphere created by ESG on stage and this spills out into the crowd with lots of people jigging and bopping about, singing along, shouting and whooping!

There is a young man on stage performing with them who looks like he is part of the family, jumping up and down, and banging percussion reminding me of a certain Bez from the Happy Mondays. The overwhelming joy and exuberant energy coming in from the band is reflected in the appreciative crowd. I can’t help but grin from ear to ear at their upbeat spirited performance.

The sound of the band is very primal and the core of it is the stripped down funk groove of the bass and drums. This is augmented with lots of percussion including claves, congos, cowbells, guiros and tambourines. It’s a fantastic minimal groove but has been so influential both sides of the pond. ESG Played the opening night of the Hacienda so it’s a fitting return and their legacy was surely influential in a lot of the Factory sound.

‘UFO’ gets the crowd going even more, and has a warm familiarity having been sampled in the past by hip hop acts such as Public enemy, TLC and Doug E. Fresh. They play some new material ‘Eyes All Over Me’, while sassy and lively enough doesn’t live up to their early stuff. But it all picks up again with the classic ‘The Beat’, and ‘You Make No Sense’ from their first album ‘Come Away With ESG’.

They then play a great rendition of ‘Come Away’ and by this time the crowd are wild and near the front of the stage where I am standing its hot, sweaty and with an almost festival atmosphere!

They leave the stage to rapturous applause and after much hollering come out for a brief encore which includes ‘My Love For You”, the last song on their début album a fitting farewell gig.