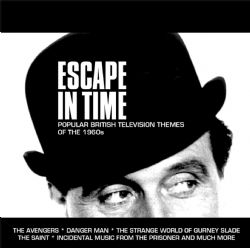 Escape In Time – Popular British Television Themes of the 1960s

Though never appearing on the kind of “Summer Of Love”/”Swinging 60s” type compilations that clog up the shelves in supermarkets these days, the music contained on the new El release ”Escape In Time – Popular British Television Themes Of The 1960s” is as evocative portrait of the UK at the time as most anything contained on the aforementioned collections.
Being the age when TV ownership really took off, the themes to popular series of the time have embedded themselves into popular culture and are continually used straight or in an ironic fashion even on television today. Though arguably the high-water mark for TV themes the 70s had some rousing efforts of their own, with Ronnie Hazelhurst, the KPM stable and Bob Sharples being memorable contributors to television soundtrack history, but by the 80s things had gone downhill (who remembers the theme to “Bottle Boys”?). Rock bands took over from then on in from the mini-orchestras and combos and it was, more often than not, a shame.

I have to own up and say even I was too young to have heard these pieces of music at the first time of transmission – most of my recollection comes from the durability of these programmes as the repeats formed the backbone of the 70s schedules I grew up with. Indeed a lot of them are still being shown on Satellite TV to this day and with Geoff Love’s “Coronation Street” heard over the credits of the weekly happens in fictional Weatherfield even now.

A large part of this resilience of course due to the programmes themselves – super-cool secret agents like Johns Steed and Drake helmed “The Avengers” and “Danger Man” with the kind of class and character that made James Bond look like a one dimensional kill-bot – but also the theme and incidental music complimented the stylish visuals perfectly (nb the themes for both these series are included, but they’re not the ones you expect – both come from the first season of each show, which had different but equally stirring opening tunes, plus in the Avengers Steed was just part of a three person team with Ian Hendry as Dr David Keel as the lead character – but I digress).

The question is though, stripped of the visuals and without the emotional connection, what would you make of the music? Well the tunes seem to fall into four categories: 1. hip swinging or mellow jazz, 2. ominous faux-classical pieces, or 3. odd chamber confections and 4.dotty attempts at aping current pop music.

For instance in the first group lies the theme to Bowie’s first inspiration Anthony Newley’s comic tour-de-force “Gurney Slade”, the Max Harris composition perfectly suiting Newley’s cock-eyed and ahead of its time deconstruction of the tradition sitcom. It’s difficult to say this is an essential purchase for anyone not familiar with the programmes themselves, but students of the era will lap up a nostalgia fest of mostly epic proportions.

The John Barry Seven weigh in with the Shadows-tastic “Juke Box Jury” and Don Spencer’s “Theme From Fireball” comes from more the daft pop influenced side. The very familiar Monty Python tune jostles with the music from ITN News in the grandstanding classical fashion. It’s an odd mix to take altogether, but there are more than enough compelling tunes here to make it a worthwhile one.

Though Ron Grainer’s “Steptoe and Son” could have been the influence behind Pink Floyd’s “Interstellar Overdrive”, it’s difficult to say this is an essential purchase for anyone not familiar with the programmes themselves, but students of the era will lap up a nostalgia fest of mostly epic proportions.

The extended incidental music from Patrick McGoohan’s baffling but brilliant “The Prisoner” brings us to the more colourful end years, but I have to say this is probably the part of the collection that works least well without the visuals; if memory serves me correctly these pieces mainly soundtracked party and marching sequences and unfortunately the main theme of the programme isn’t present. However this part of the collection is enjoyable enough musically though perhaps being a little throwaway.
Nevertheless apart from that, this is a solidly planned and effective trip through some of the idiot box’s finest musical moments, that would survive a grilling from John Freeman on “Face To Face”!