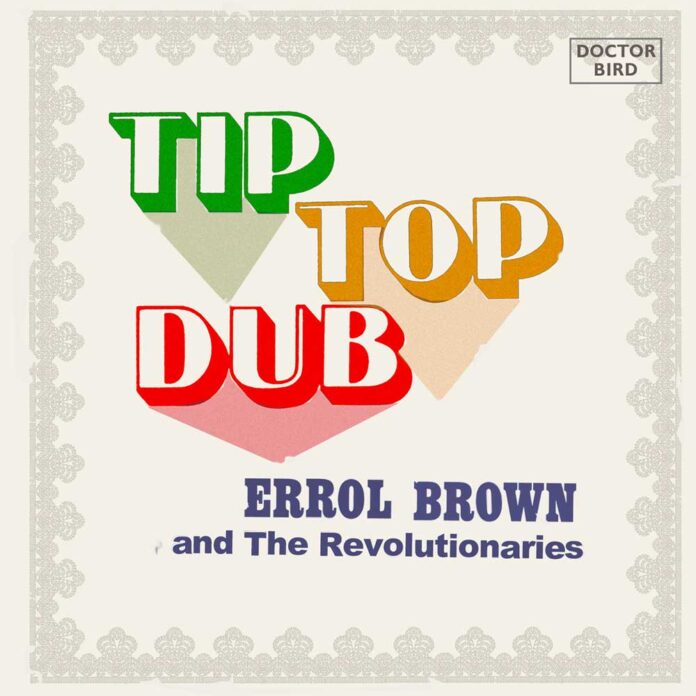 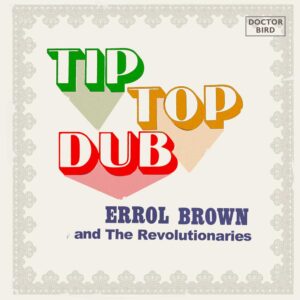 A 2CD compilation of Errol Brown’s dub productions recorded for Sonia Pottinger’s High Note label between 1977-78, with contributions from Sly & Robbie as part of top session outfit, The Revolutionaries. 25 of the 42 tracks included enjoy a reissue for the first time here. Ian Canty feels this could be just the tip of an iceberg…

Errol Brown’s dub adventures have been extensively collected on three previous Doctor Bird sets (Dubb Everlasting/Dub Expression is reviewed here, Culture Dub/Medley Dub here and Treasure Dub Albums here). On Tip Top Dub, we meet him during 1977 and 1978, when the dub style was arguably at its apex. He had been a sound engineer for Sonia Pottinger for some time by then and the versions gathered here were originally issued via her High Note label in the late 1970s.

The Revolutionaries were Sonia’s backing outfit of choice and were noted for the dub plates they contributed to at Channel One, Joseph Hoo Kim’s wildly successful studio set-up. Their ascent to being the premier studio band of the Kingston music scene was, at the time, complete and on Tip Top Dub, they provide Brown with the polished instrumental work necessary to make his editing skills shine all the more brightly.

Errol Brown’s dub versions are not as gimmicky as some, but are made effective by what he drops back in and when he does it, which grants the sounds pressed into service the maximum impact. Hell & Fire’s Without Love is the first version of Tip Top Dub. It is renamed Love Dub and has the organ line come back at a perfectly-judged moment to illustrate the above point. Sly & Robbie’s mastery, of course, comes to the fore as the music is stripped right back. This offering is followed by the title track, which uses an Enos McLeod rhythm track. A fair amount of his Making Love vocal is retained initially, but with a liberal application of echo. How the drums pitter-patter away into the ether is an ear-catching touch.

Ballistic Version, aka Sly Special, has its roots in Leroy Smart’s classic Ballistic Affair. After the bright intro, which is kept intact, Dunbar’s abundant percussion talents are called into action. Then they reach right back in time to the late Don Drummond’s archive with Chapter 15, a cool version of his 1965 ska hit, Man In The Street which, amongst the drum echo, retains shards of trombone.

On the dub of Maureen Pearson’s How Do You Feel, Errol unexpectedly drops in her vocal, singing the hook-line near the end in tantalising fashion. Babylon A Dub takes Daughter Cherry’s 1977 High Note hit, Babylon You Guilty and has her voice recast as a ghostly whisper in the background of the bass moves and the thudding drum attack. Glistening guitar notes herald the start of Reggae Version, with hints of Owen Gray’s voice coming in strongly through the echo chamber from time to time. Limbo Version, based on Al Brown’s cover of a Jimmy Cliff number, works well too.

The first disc ends with Peaceful Woman Version and Know Your Friend Version. The former has the golden tones of Marcia Griffiths zooming in and out and the latter is a dub cut of Jackie, aka Linton Brown’s Know Your Friend. It has echo applied to a piano for a change, something which works well.

The second disc of Tip Top Dub commences with a DJ talkover from Mikey Dread on Roots Man Dub, a smart version of his Roots Man Revival. Delroy Wilson’s great cover of R&B tune, There Will Never Be Any Peace keeps its irresistible swagger, even when going right down to drums and bass on Conference Dub, and King Ruler, a cut moulded out of Mind, Body & Soul’s King Of Kings, works like an absolute charm. This one demonstrates that Brown isn’t afraid to leave a lot of the original in to get the desired effect. Forward Dub, constructed around Brent Howe’s Forward Up, cuts down more to the dub essentials, but the bright organ, voice and guitar interjections give it colour.

Some lazy, lovely trombone from Errol Scorcher’s Peace Truce becomes a key element on Peace Dub and Shiney Skank makes good use of the Shank I Sheck rhythm, taken here from Ranking Joe’s DJ cut. Woman Iron Rock (Version), the dub of Lorna Bennett’s song, is done so well, the backing vocals creeping back in with the horns as Robbie Shakespeare’s bass dances. Everything about it is tasteful and inventive. Chocky Taylor was a DJ/singer who got a break from Sonia Pottinger and he repaid her trust in him with an excellent roots reggae number, False Dread. It crops up here as False Dread (Version) and Sly’s unique flair for rhythm is made plain, with keyboard squiggles darting about madly.

Marcia Griffiths’ Hurting Inside keeps its lyrical trumpets and heavenly vocals in part. Hurting Inside Version is a real chill of a dub, with the line, “Happiness come back a while,” looming attractively out of the mix. She also provides the following Dub In Dreamland from her Dreamland hit. This one has Marcia’s voice popping up along with more skeletal sections, and chopping guitar setting the initial tempo. Her Sugar Wooga Man is utilised for Wooga Dub and ensues in a fine and funky way, before zoning out in a very cool manner indeed.

The very popular Miss Wire Waist was a big seller for Carl Malcolm and the version here is effective enough, with the refrain taken down to just being accompanied by a solid bassline. Struggling by Sharon Black, one of Sonia’s many female singers on High Note, has some prime R&B guitar before Sharon’s heavily echoed vocal comes in. Strong Dub, originally a cover of a 1964 Gene Pitney hit I’m Gonna Be Strong, starts with brass to the fore, giving a real taste of the tune, pre-dub. Then it breaks right down in classic dub style, with Teddy’s voice well down in the mix.

The set finishes with three versions that even the compilers could not place the rhythms for. Socialist Dub starts out brassy and with vocals, but is a relatively short cut. The DJ toast style of Strictly Roots works well, with bass driving it along sometimes. Finally, we have Stay Dub (aka Lion Dub). This has the ‘tape rewind’ sound that was becoming fashionable in dubs at the time, before motoring along, with organ stabs and lighter keys becoming a feature.

The packaging that comes with this 2CD collection has some informative notes from Malcolm Gillett on the original songs that were used as source material for Tip Top Dub, something which makes the set feel all the more complete. But it is the top-quality music that is the real star. Errol Brown and The Revolutionaries really did know the ideal way to cut a version, and on the vast majority of the examples here, they strike gold. Errol Brown’s dub plates may not have been the most fashionable, but boy, they were effective. Tip Top Dub offers up plenty of evidence to prove it.