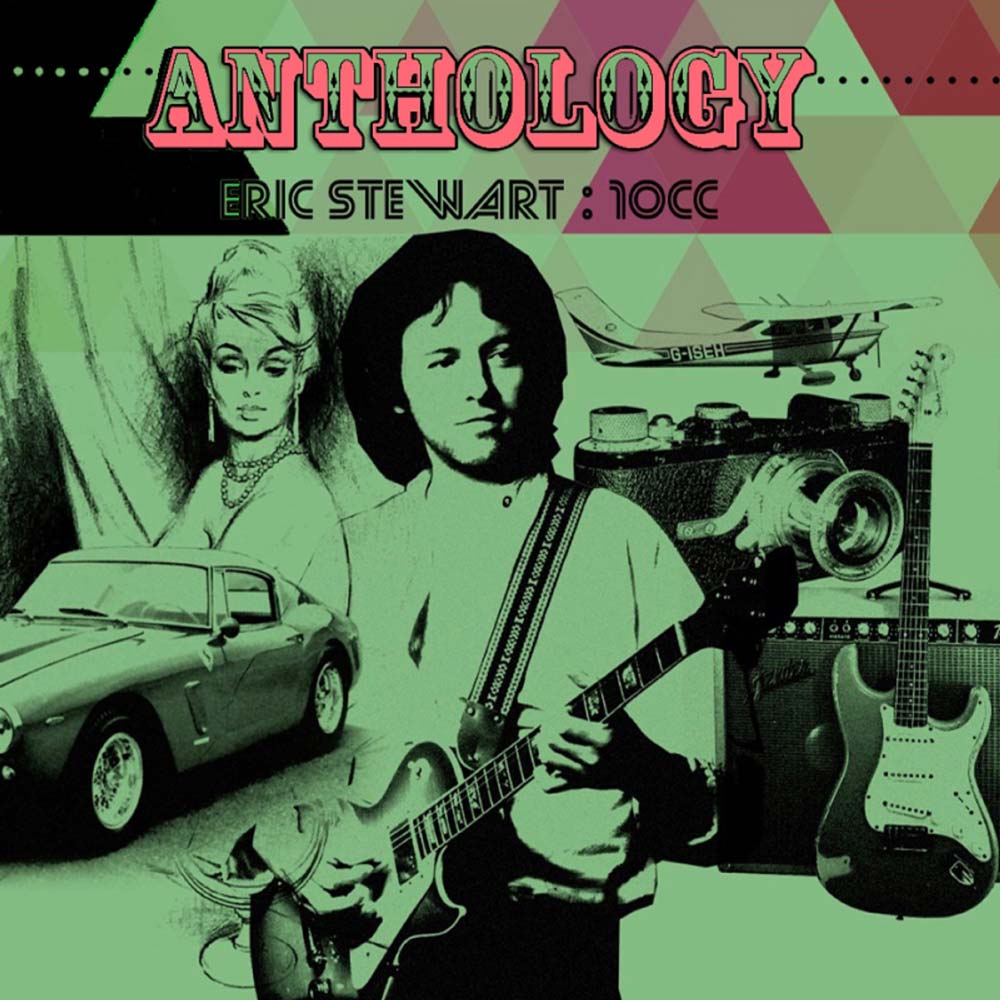 Collection from the 80s, 90s and early 21st century featuring Eric Stewart, with tracks from later-period 10CC and his solo albums (the contributors to these records numbered a certain Paul McCartney). LTW’s Ian Canty confronts a childhood trauma, listens to CD etc etc…..

If one was feeling especially cruel you might say that Eric Stewart was the “Ringo” of 10CC. Goldey and Creme, with their visionary approach to recording would nab the Lennon and McCartney roles and one man hit machine Graham Gouldman would be a shoe-in for George, so that only leaves the lovable drummer. Very unfair though, because Stewart was a talented guitarist, singer, producer and songwriter. In addition he had a long career in music behind him before he linked up with Strawberry Studios and then became part of Stockport’s Fab Four.

The young Eric Stewart got his start in the Pop world by joining Wayne Fontana and the Mindbenders way back in 1963. After a run of hit singles in the Beat era, Stewart split from the band and sunk some of his money in a recording studio called Inner City. He and his business partner Peter Tattersall moved in and re-christened the facility Strawberry Studios. Soon another one-time Mindbender Graham Gouldman invested in the studio and a bit later drummer Kevin Goldey and Lol Creme turned up – the classic line up of 10CC was in place, adventures as Hotlegs in the Glam world and the New Wave Band notwithstanding.

10CC were successful both critically and commercially but I have a confession to make: for a very long time I couldn’t abide 10CC and the very mention of their name would bring back bad memories of Dreadlock Holiday (which I could not stand) and of my younger days. It was totally illogical, elder sibling’s favourite band syndrome if you will, where you’re naturally disposed towards disliking a band your brother or sister presents as the bees knees. My brother played their track Une Nuit a Paris every Sunday and it seemed to last for every Sunday. When Punk came along he dismissed my budding regard for the Pistols, Clash, Buzzcocks etc, calling them morons in comparison to 10CC. Recognising the blinding intelligence that informed God Save The Queen, Complete Control and Boredom I couldn’t see it, but the insult hurt. You couldn’t doubt that 10CC were bright fellows, even though they seemed to like to rub your nose in it a bit.

After many years (and I still hate Dreadlock Holiday, the worst “White Reggae” ever unless Little and Large recorded a version of Jamming) I managed to get past this mental block and see 10CC for what they were, a fine and inventive Pop act with a million ideas. Stewart played a large part in their success, including writing and singing lead vocal on their biggest hit I’m Not In Love. This Anthology features the vast majority of his last two solo albums to date Do Not Bend and Viva La Difference, a lot of 1982’s Frooty Rootes, the title track from his debut solo offering Girls and some late period 10CC offerings. A mixed bag, but Stewart is an expert player, singer and arranger and there’s good stuff to be found.

This anthology dots around all over the place but perhaps it is simpler if we will look at them chronologically, but take the 10CC stuff first. By the time of Les Nouveaux Riches from Ten Out Of Ten (asking for trouble with that album title I’ll wager) the Godley and Creme years are well behind them, with Gouldman and Stewart heading up the band since the split in the late 70s. This song is a good indicator for what Stewart would do in solo mode, with its steel drums giving a queasy reminder to Dreadlock Holiday but otherwise a nice understated piece of Pop/Rock with slightly cynical and humorous lyrics. We move on a few years to 1995’s Mirror Mirror, which was essentially two solo albums stuck together with Stewart and Gouldman barely crossing paths. We get Eric’s side of it here. Of these tracks Age Of Consent is the pick – it evokes a good edgy atmosphere and is a wonderful piece of 80s Pop Music, which of course highlights a problem – 10CC at this point in time were a long way from the cutting edge unlike their early 70s heyday.

Moving onto Stewart’s solo works, we just get the one song from his first LP, the eponymous Girls. It had a nice country tinge, but flopped as a single and apparently the rest of the album was made up of incidental soundtrack music to “The French Saturday Night Fever” (being the reason nothing else is included from it here). Better was to come in the form of album number two “Frooty Rooties” (I’ve no idea what that means). The agreeably nuts faux-Disco of Guitaaaaaaaaaaarghs is bracing and Night And Day’s 50s pastiche is a winning glance right back to Donna ten years previous. The Ritual is the kind of super-complicated, multi-part piece that harks back to that song on The Original Soundtrack, but it’s all expertly carried off. Strictly Business is excellent – marrying Rockabilly and Electropop in the oddest but most charming way.

Despite the strength of Frooty Rooties it was over 20 years before Stewart’s next solo record, Do Not Bend and unfortunately going on the selections here he struggled to repeat his past success. It sounds very much what it is, the product of one man on his own in a studio, without anyone to bounce off. Though he is in good voice on Yvonne’s The One (a co-write with Paul McCartney) and More And More Each Day benefits from some fine backing vocals. Happily next LP Viva La Difference was an improvement on the evidence provided here (it also helps that the songs from the LP are presented on this Anthology in one block). We’re Not Alone is a prime slice of paranoid Sci-Fi Rock & Roll and the world weary Sleep At Night again presents Stewart’s voice in fine form, even if the lyrics are slightly below-par. Can’t Get Enough with its mood of regret and recognition of mortality and Do Not Bend are both excellent, showing years of craft but offering something fresh. The tinny It’s In The Blood really the only let down here.

It’s a testament to Eric Stewart’s staying power that he managed all this after a serious car accident in 1979 which effectively put the breaks on 10CC’s chart career. The man himself provides the sleeve notes in a heartfelt and modest way – it seems he’s not planning another record, which is a shame. Anthology does take a confusing route to do it, but it shows a man of considerable talents undimmed by the passing of the years. A consummate professional at ease with his muse, if his solo career was determinedly low-key it had more than a few jewels scattered throughout.