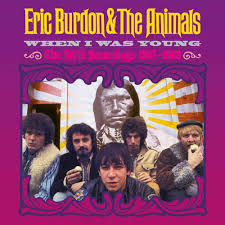 Eric Burdon & The Animals – When I Was Young

Subtitled “The MGM Recordings 1967-1968” this five CD set rounds up all the Eric Burdon And The Animals albums plus bonuses and a mono version of debut Winds Of Change….LTW’s Ian Canty hears the strange sonic adventures of a Geordie in flower power……

When the original incarnation of the Animals split in 1966 after a flurry of business problems, singer Eric Burdon and drummer Barry Jenkins (who had recently replaced John Steel) formed a new version of the band. Burdon took star billing in Eric Burdon And The Animals, with guitarists Vic Briggs and John Weider plus bass player Danny McCulloch making up the quintet. Anyone used to the tough-nut Geordie rhythm and blues the band had previously specialised in were in for a shock. The “new” Animals would be a very different fish from their forbearers.

The reason behind this was Burdon’s burgeoning obsession with the American psychedelic scene. His and the band’s adoption of the style and mindset over the course of the LPs presented here can at times sound a bit simplistic, almost like a piss-take in fact, all these years on 2020. It probably even did a little at the time. The Winds Of Change title track is like the “Sweet Soul Music” of Psychedelia. Lots of namechecks going from the jazz/blues founding mothers and fathers right up to the Beatles, Frank Zappa and, slightly oddly, the Mamas And Papas. This is all accompanied by violins, sitars and drones, with Burdon’s voice intoning the incantation above the musical hubbub.

A cover of the Stones’ Paint It Black ebbs and flows nicely, building up to harsh intensity, then everything gradually eases off to just high hat and Burdon’s voice – very effective, a good version. The best songs here are generally the ones that dodge the sugary love and peace stuff for something a little more downbeat. San Franciscan Nights was a big hit and remains a pretty folk pop item, even if the lyrics (especially the announcement at the start) sounds truly of its time. In 1967 San Fran locals commented that warm nights weren’t something usually experienced there, but it has a neat melody and still pretty enjoyable now.

Good Times is a good rueful tune with lyrics detailing regrets over wasted chances. It sounds like Burdon was being a bit hard on himself here, but the song works. However Man-Woman is like a beat poet parody and The Black Plague also inadvertently produced giggles for me I’m afraid in its doomy melodrama. It’s All Meat, despite being ace acid rock, is one tribute song too many, but Anything atones by having nice low-key feel to it.

This disc arguably has the best extras of the entire set. The When I Was Young single is top quality, with the top side being moody and cool with some great guitar, whilst the flip drug song A Girl Named Sandoz retains some of the blues raunch of the old Animals. Ain’t That So and Gratefully Dead are both decent efforts too, really driving r&B tracks and the single take of Anything shines.

Second album The Twain Shall Meet (which put me in the mind of the Windsor Davies/Donald Sinden sitcom Never The Twain, for which I apologise for mentioning) starts in similar mood to the debut, but has the edge with better songs and a slightly less stoned and confused vibe. Sky Pilot, which also was released as a single (split into two parts, featured in that form as bonuses on this disc), is the centrepiece of the album. Perhaps this is the only psych song about a military padre? Starting unaccompanied, Burdon and the Animals throw the kitchen sink at this one, with fighter plane sounds effects, heavy freak rock guitar and bagpipes, but it all works with a big, irresistible chorus. Though obviously it needed cutting down from the seven minutes plus of the LP version for any chance of single success, the long take is the best.

This probably the most consistent album of the four, with only the catchy Monterey single a salute to the counter culture. Just The Thought is an able psych ballad and No Self Pity benefits from good guitar work and what sounds like a harpsichord. We Love You Lil proves beyond doubt what a great band these new Animals were, moving lithely from music hall stomp to thundering psychedelia in one step. The drone and pipes of All Is One provide an edgy end to the album, maybe even a little like the Velvet Underground, who producer Tom Wilson was also working with around the same time.

Every One Of Us emerged just three months after The Twain Shall Meet and this closeness may have been one of the reasons it didn’t get release in the UK. It was also self-produced, unlike the first two LPs. Comprising of seven tracks, they are all are pretty lengthy apart from the throwaway Grand Old Duke Of York, retitled cheekily as Uppers And Downers. One of the best entries here is the very cool guitar instrumental Serenade To A Sweet Lady, written by John Weider for his wife. White Houses, the LPs’ single, is a groovy piece of danceable psych rock with strings and blues standard St James Infirmary is given a moody, echo-laden treatment.

On the less positive side, the mini-play at the end of the Immigrant Lad, a conversation between a stereotypical chirpy cockney and dour Geordie, could almost be a lost Vic Reeves/Bob Mortimer sketch. I suppose it shows a willingness to push boundaries, but it does sound a little embarrassing now. Talking of experimentation, the epic New York 1963-America 1968 appears like two long songs split by a rambling rap by a black US serviceman about his life. There’s a nice Hammond piece towards its conclusion courtesy of Zoot Money, who had joined the band by this time, but overall it does feel like padding. The single take of White Houses is the only extra on this disc.

Vic Briggs and Danny McCulloch had left the Animals by the time Every One Of Us was released. With Zoot now a big part of the Animals and the band needing a guitarist fast, his old Dantalian’s Chariot bandmate Andy Somers (later know as Andy Summers of the Police) was called in. The DS influence on the band could be heard on the last side of double album Love Is, the final selection here and the last Eric Burdon And The Animals LP of the 60s. Two lengthy songs from Zoot and Andy’s old outfit Gemini and The Madman (Running Through The Fields) feature, in effect merging that band with Eric Burdon And The Animals.

The album begins with River Deep, Mountain High, a single which also featured Robert Wyatt of Soft Machine on backing vocals. Burdon is in his element on this, being loose and funky, the instruments dropping out before coming up again in a richly deserved salute to the great Tina Turner. In fact bar Eric’s soaring psych number I’m Dying (Or Am I?) where he duets effectively with Zoot, this is a covers album.

They do a good job jamming on Sly Stone’s I’m An Animal and Traffic’s Coloured Rain, the latter with a very long Andy Summers’ guitar solo. He would have never got away with that on Regatta De Blanc! There’s some nice instrumental touches too on the Bee Gees much-covered To Love Somebody and this time the longest track, the nineteen minute segue of Gemini and The Madman is fluid and fun. It never loses momentum and is their most fully realised effort at a long piece.

After this a mono version of Winds Of Change closes this new collection. A word has to be said about the presentation of this set. A sturdy outer box houses the albums and each comes in individual mini-sleeves (Winds Of Change and Love Is reproduce the original gatefold). There is also a poster and informative booklet contained, with latter being a real treat, having a full gig list, plenty of rare photos and a full history of each album and the band itself. This has all been excellently put together and has the feel of a “proper” boxset, something that has been done with a real love for the project.

It had to be said that not many pop stars fell for the whole summer of love deal more than Eric Burdon. When he rejigged the Animals away from their roughhousing r&b towards the trippy it must have blindsided more than a few of the original fans of the band. Though they never recorded a truly great LP, When I Was Young has enough good and diverting material included to make up for it. The Twain Shall Meet probably captures them at their peak, with a able producer there to restrain Burdon’s more sprawling notions, which tended to take over as time went on. Having said that Love Is is also very enjoyable and each album has at least something to recommend about it. I’m impressed with the job the compilers have done – you would also have to go a long way to find a boxset put together in a better or more thorough fashion.

Eric Burdon And The Animals only existed for a couple of years, but they more than made their mark as a separate entity. On When I Was Young the new band prove they were a more flexible proposition than the originals and they provide much to enjoy here. Occasionally they soared like few others and it is all here for you to hear.