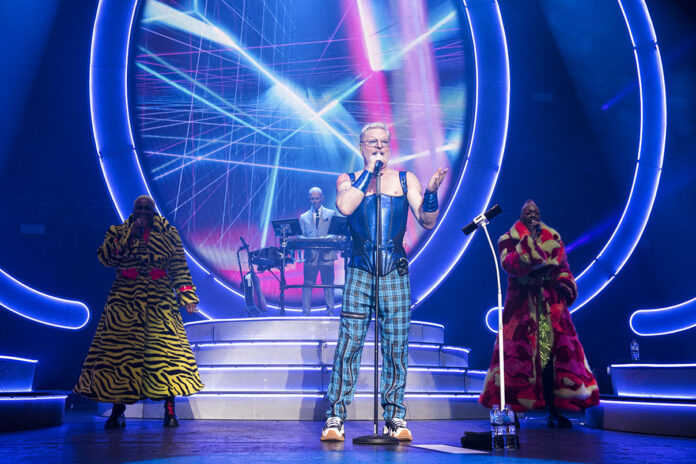 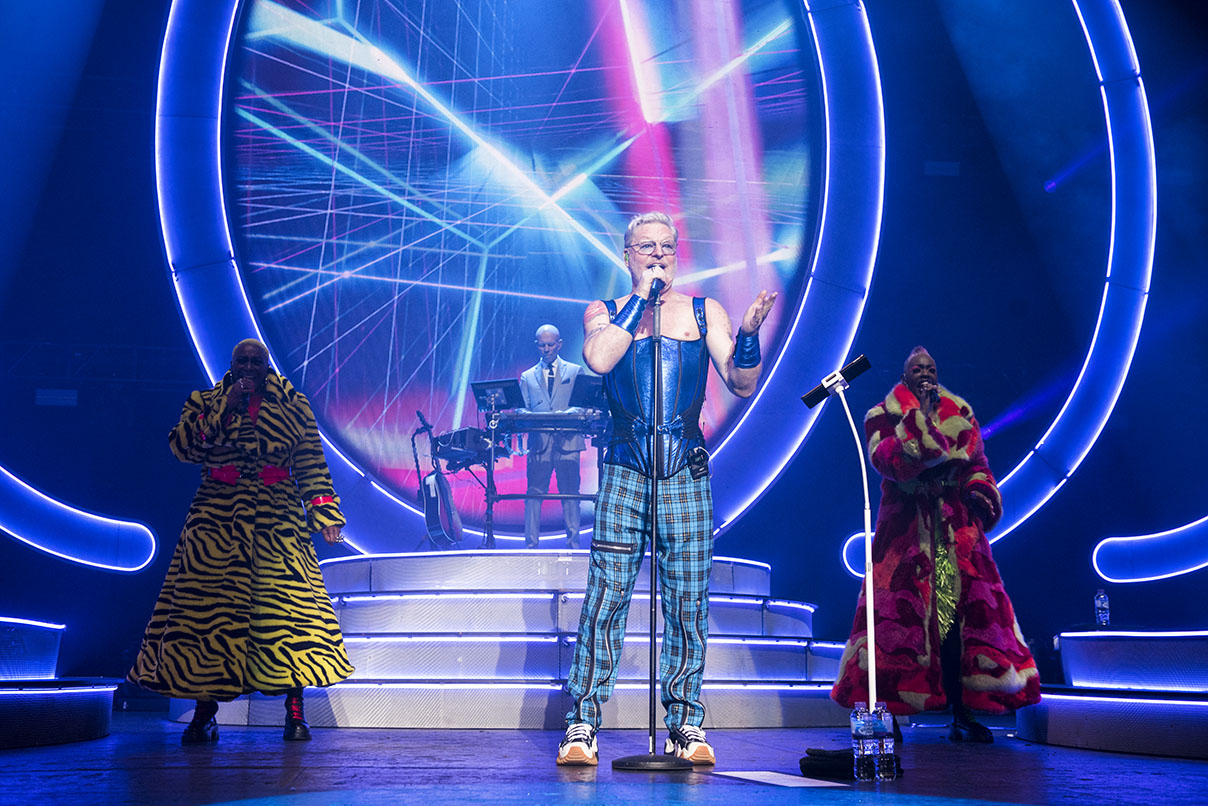 Electronic duo Andy Bell and Vince Clarke aka Erasure are touring in support of their 18th studio album 2020’s ‘The Neon’. Louder than War’s Martin Mathews and Melanie Smith (photographer) were at the first of their two sell-out shows at the Manchester Apollo. Hard to believe that Erasure have been releasing music since the mid-1980s and have more than 30 UK Top 40 hits.

It was my first time seeing the duo, so I had been really looking forward to the show. The stage set was simple and cool, with neon lighting reflecting the name of the album and tour, and brilliantly lit with a central video screen displaying graphics to accompany the songs.

The show opened with the theme from Joe 90 and Andy and Vince were joined onstage by two fabulously dressed, brilliant sounding backing vocalists, wearing multi-coloured fake fur coats. The twenty-three song show kicked in with their 1991 hit Chorus. Andy was as flamboyant as ever, appearing in a blue gladiator-style corset with checked trousers, dancing around the stage. In between songs he engaged with the audience discussing everything from Coronation Street to Christmas, and also took the time to thank one huge fan who he said had been to every show so far on the tour. 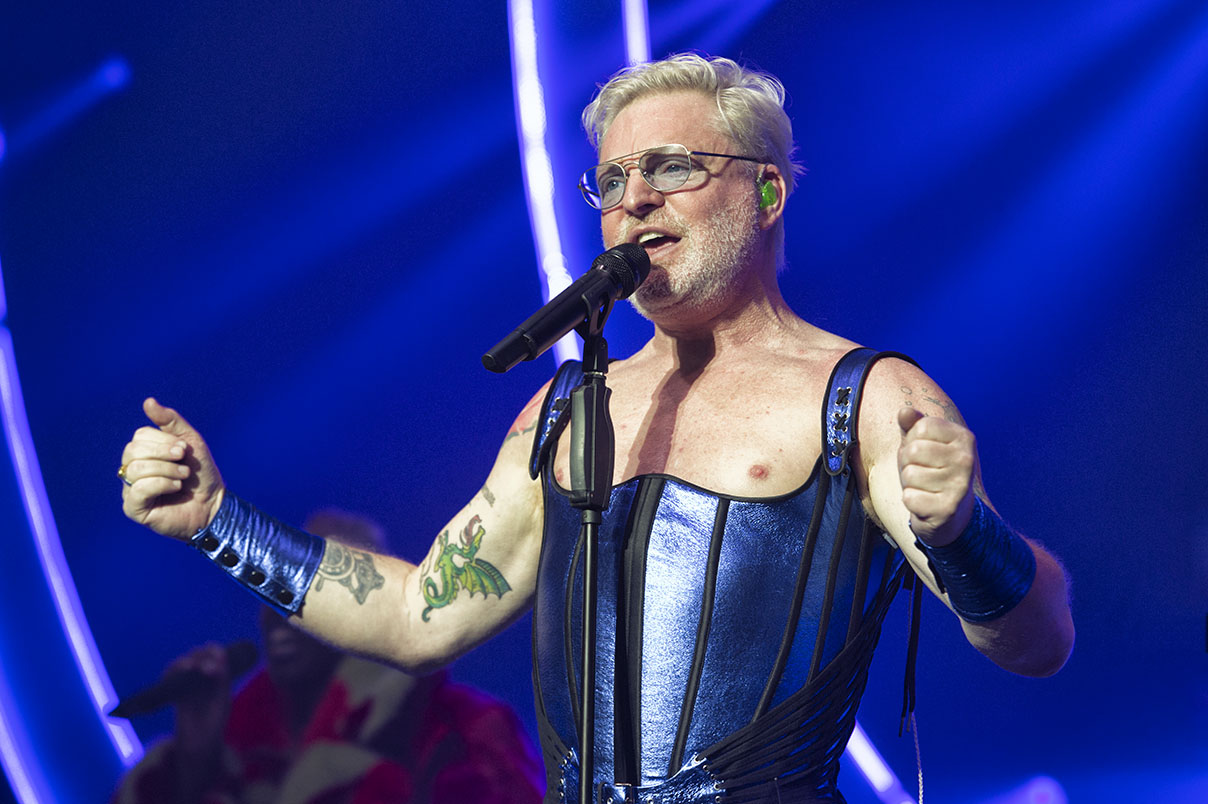 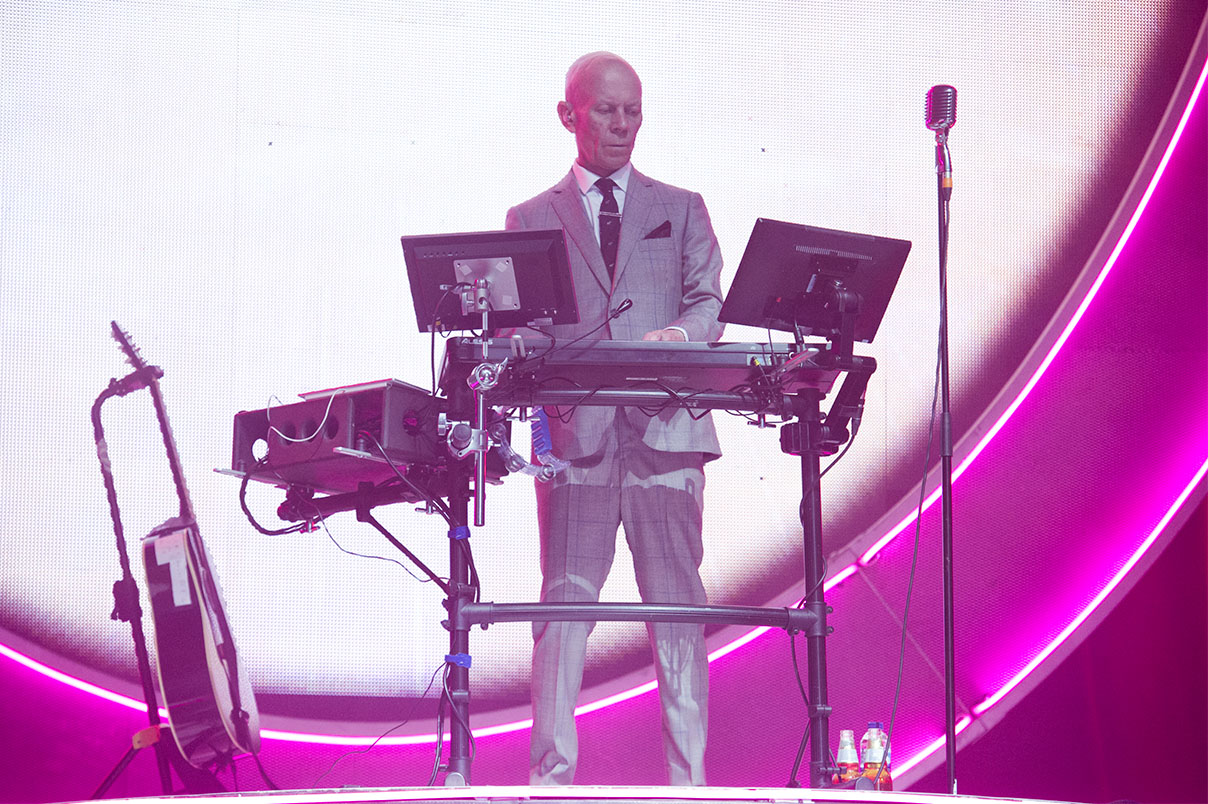 The setlist for the show featured a mixture of songs spanning their impressive long career, plus the newer songs, which sat well alongside the big hits, such as Sometimes, Chains of Love and Blue Savannah. This was however more than just a retrospective greatest hits tour – the big hits still sounded fresh, current and just as dynamic as they did back in the ’80s and ’90s. The packed crowd, me included, were loving the show, dancing and singing along, they roared with approval as those pop classics kept on coming. 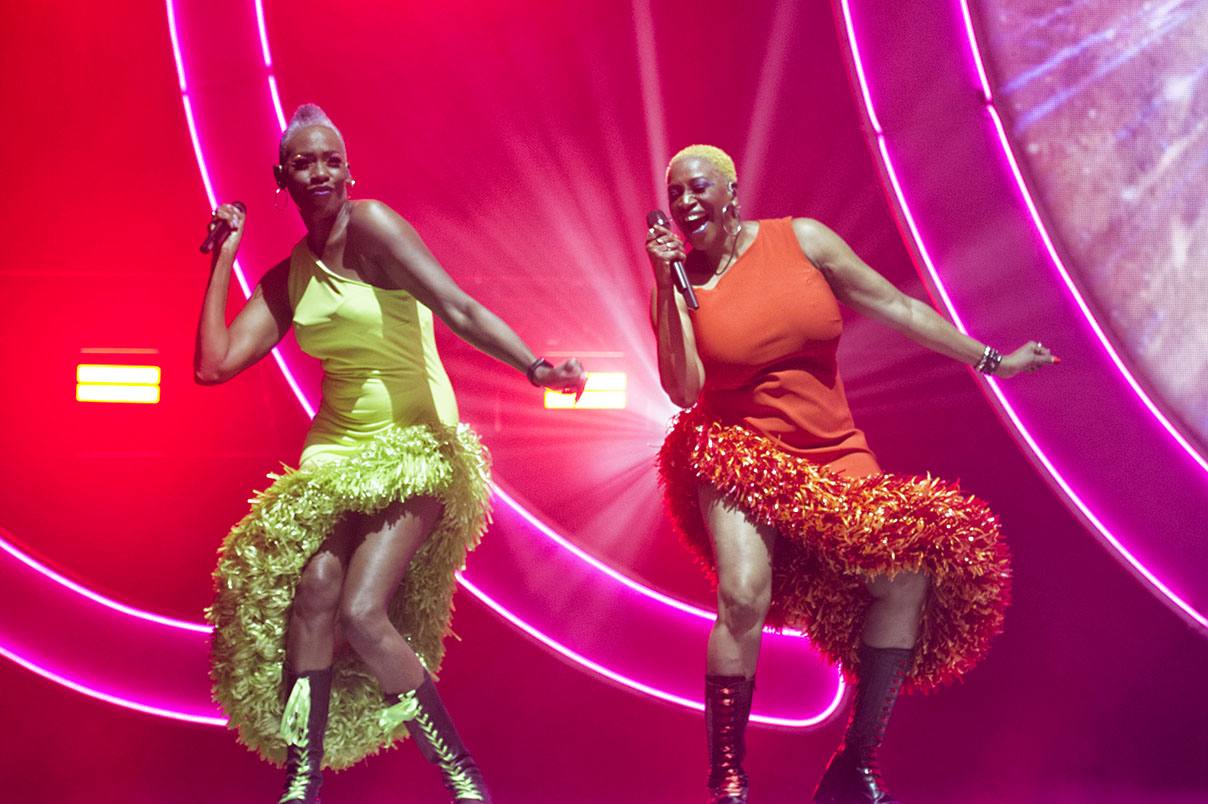 At one point during proceedings, Andy handed Vince a pair of scissors and asked him to cut him out of his corset, which he then removed, replacing this with a yellow gorilla-printed t-shirt. A cover of The Eurythmics hit Love Is A Stranger was an unexpected surprise and the only non-Erasure song of the night. Andy explained afterwards that he’s a huge fan of The Eurythmics and they were one of the first bands he saw live. The hits continued coming and after a spirited, high-energy rendition of Victim Of Love, they briefly left the stage before returning for a two-song encore, that saw Andy appear wearing a red and silver glittery pair of platform heels.

As the final song finished, 1988’s hit A Little Respect, the audience were showered in rainbow-coloured confetti fired from cannons on either side of the stage. A fitting end to a fabulous show, and a thoroughly enjoyable romp through some timeless pop classics.

Setlist:
Chorus
Hey Now (Think I got a feeling)
Fill us with fire
Sacred
The Circus
Who needs love like that
Nerves of steel
Blue Savannah
Chains of love
Turns the love to anger
Careful what I try to do
Sometimes
Save me darling
Shot a satellite
Love to hate you
Love is a stranger
Drama
Always
Stop
Push me shove me
Victim of love
Oh L’amour
A little respect

The Neon Tour sees Erasure playing dates around the UK throughout October before moving onto North America and Europe in 2022.