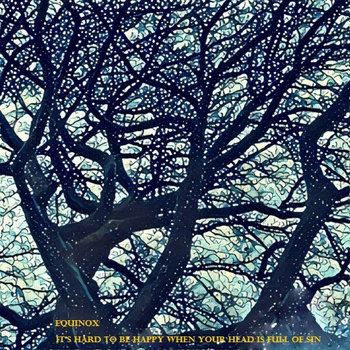 The album by Equinox from which Kiss (feat. Feral Five) is taken is called It’s Hard To Be Happy When Your Head Is Full Of Sin and has already been given a sound thumbs up and an 8.5/10 review from LTW’s own Simon Tucker here.

I reviewed it for Joyzine blog here and at the time I described the track as “…a really nice gentle throb of analogue synth and Equinox’s clever word play intermingling and again obsessing about unrequited love/lust? Or is it coming to terms with one’s own mortality? The layers of electronica build and build to a fantastic final third of this track”

The video of ‘Kiss’ (feat. Feral Five) is directed by Jay Stansfield and is a glitchy, scratch sexy AF triumph. It suits the sound and the tone of the track perfectly and it is majestic in its intimate portraits of affection between couples of all ages. The video borders on NSFW at times, but hey fuck it. It’s love. It’s affection. It’s natural. And that is exactly what Stansfield gets out of the people in the film. On top of this, you get the electronica throb which actually heightens the effect of the visuals and adds a visceral portrait of love, lust and longing. This, combined with Equinox’s laid bare spoken word delivery is a perfect match and makes for quite the visual, sensual and aural spectacle. Give it a watch now.