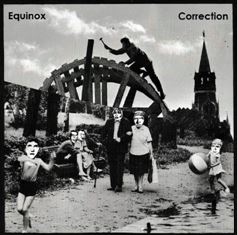 Spoken word artist Equinox has announced his new album Correction which will be available via prolific web label Wormhole World on the 30th August.

The new album features a further array of established and up and coming artists including Reed Hays of Reed & Caroline and Alka, both of whom currently record for Vince Clarke’s Very Records.  Electronic punk-rapper Razorrawks collaborates on Janine and the legendary Helen McCookerybook formerly of Helen & The Horns and The Chefs joins forces on The Muse.  Industrial Churchcore from Vukovar adds to the haunting Lament and fellow poet Lynn Gerrard joins forces on Broken along with the experimental sound of Xqui.

Artwork – Building A Future Together by Ashley Reaks.

Correction will be available on limited edition CD and download via Wormhole World and Equinox Bandcamp pages.