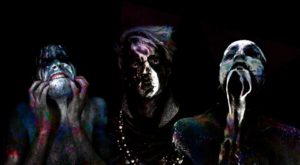 Louder than War ‘s Ioan Humphreys gets pummelled and broken by the brutal opera that is EORÐESLAJYR’s Haxan LP. It’s got to be heard to be believed.

Based in Dublin, EORÐESLAJYR (pronounced Earth Slayer) are an independent Irish avant-garde music trio consisting of Sam Burton on vocals (Spudgun), Simon Bird on synthesizer, and Tom Morris on guitar (Turning Down Sex). The group originally formed with the intention of writing and performing experimental soundtracks for lesser known cult/silent films, and indeed Haxan is an album of music inspired by and written to work as a soundtrack for Benjamin Christensen’s 1922 silent film ‘Haxan’ (aka Witchcraft Through The Ages). ‘Häxan’ tells the tale of Satan worship, demonic possession and the persecution of witches in medieval Europe.

Originally released in 1922, it is one of the great masterworks of early horror cinema and a pioneering film for its rich use of lighting, composition and special effects. EORÐESLAJYR’s eclectic soundtrack emphasises the extreme hysteria of the witch hunts and the dark religious fervour it inspired through a constantly shifting, varied blend of styles. ‘HÄXAN’ quickly mutated into a complex arrangement involving collaboration with cellist Anna Clock, saxophonist Sam Comerford and percussionist Ross Chaney.

‘Surrounded By Nine Angelic Choirs’ begins with electronica, distorted guitar noise that builds up and up to a very abrupt unearthly vocal growl that is both menacing and hideous. 30 seconds into this album you already know you are in for something VERY special. It’s the deafening cacophony of noise that comes post growl that is perhaps the most unsettling part. However, as quickly as this starts, it suddenly segues into the most beautiful piano part. This quickly leads onto some oriental sounding percussion and instrumentation, pained groaning vocals and more unsettling electronica and gentle percussion.

At 8.21 this mammoth opener of a track takes you places that you will both remember and hopefully forget. Sonic soundscapes and hellish arenas full of suffering are what you are witness to here.

‘Uprooting The Seed’ follows and again you are engulfed with the most deafening chugging doom. Lazy comparisons could be to Sunn O))), and there are definite sonic similarities, however EORÐESLAJYR have a breadth to their sound that just doesn’t compare.

‘In Decaying Dreams’ engulfs the listener with atmospheric sound samples, keyboards electronica, field recordings and stock sound effects. Unsettling bursts of distorted electronica, trumpet, violin and gentle guitar plucking all combine to create a supreme unease. The beautifully titled ‘Baba Yaga The Boney-Legged’ features again guttural and grindcore vocals to add to the brutality. The fact that the beautiful ‘Lullaby’ follows all this mayhem and is genuinely a gorgeous song, makes this whole experience THE MOST unsettling experience I have had for a while. Gentle beautiful cello, guitar plucking and ambient noises build up and up to a dramatic finish.

And as the album progresses, the experimentation and scope of this band just keeps growing and expanding. With Gregorian chanting, Einstürzende Neubauten influenced industrial percussion, growling and field recording screaming, this record seems to revel in its ability to unsettle.

‘Put To Death What is Earthly in You’ is an epic track at 7.40 and revels in brutal percussion and distorted electronica. And as the LP comes to it’s natural, brutal conclusion, you are left with the debris and left over’s of a soundtrack that takes in all forms of subjugation and brutality and ends with the intense noise and eventual sound of crackling fire at the end of “Lead Me To The Stake”

This debut LP HÄXAN by EORÐESLAJYR’s is at times hard going, disturbing and unsettling. But i think all music should be like this! Not necessarily in the same way that EORÐESLAJYR have done it, but music should definitely take you out of your comfort zone. I loved this LP either ways. And i personally think they should try and replicate the sound live against the back drop of the film. This would make one hell of a spectacle. Just outstanding stuff.