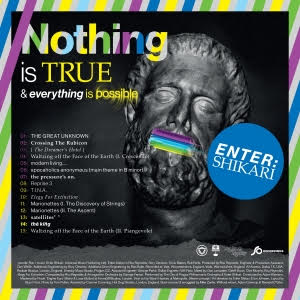 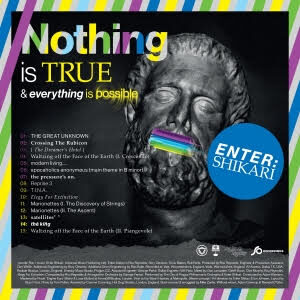 Enter Shikari – Nothing is True & Everything is Possible (So Recordings)

Enter Shikari make a comeback with their own unique brand of energetic musical transmogrification with a new full-length studio album. Alice Monty checks it out for Louder Than War.

Launching into the first track, The Great Unknown, I find myself slapped in the face with a mid-noughties nostalgia stick. The satisfying sounds of pulsing synth staccato and droning bass feed into dense guitar riffs, with a layering that would not have sounded out of place amongst Enter Shikari’s inaugural work. The advanced production value establishes the track firmly in the present though, exemplifying the superior craftsmanship of Enter Shikari, both musically and in the song-writing itself. There is an energising feeling of rebirth with a deep undercurrent of trepidation and solitude, as if we have had a lonely sleep pod revival in a high-budget sci-fi flick.

Limbering up post-awakening, we dive straight into the second track. You do not need to have paid attention in your ancient history lessons to appreciate the bouncy synth pop song, Crossing the Rubicon. Although the song appears buoyant and upbeat at first listen, in traditional Enter Shikari style, there is great depth to the lyrics, which are overflowing with recognition of wrong-doing and regret. Established fans are also rewarded with a nod to early hit Labrynth, with a double Easter egg of lyrical reference and a cheeky chime of those familiar synthy notes.

The characterisation of the verses in next track, {The Dreamer’s Hotel}, is brash and unapologetic as opinions are spewed with implied arrogance and ignorance. The choruses are a swift shift in the opposing direction, as the metaphorical Dreamer’s Hotel represents optimism for an alternative, more constructive mindset. This song is both catchy and clever, and it is no surprise that the band decided to release it as the album’s first single back in February, snapshotting a time when kindness and positivity appears to be increasingly overlooked and underrepresented against the raucous of nastiness that has become the dominating presence across our screens and social media feeds.

Waltzing Off the Face of the Earth (I. Crescendo) continues to take us on a musical meander to the heart of this album’s message about the perils of contemporary society. A gloomy brass waltz mutates into a droning synth monster that marches on through lyric after lyric of desperation, climaxing in a bleak repetition of the album’s austere title. The crescendo is lyrically exemplified by the power in the finality of ‘nothing’ and ‘everything’.

Infused with ‘90s neo psychedelic rock, we kick back to the steady, simple chorus and spoken verse of Modern Living. Apøcaholics anonymøus (main theme in B minor) feels like a heavily intoxicated progression of Modern Living. These tracks are an interesting musical aside for Enter Shikari but I’m glad they collectively last for less than 5 minutes so we can get back to the more distinctive dynamic energy that gives the band their exceptionality.

Next track, Pressure’s On, is a welcome rejuvenation. A gently awakening harmonic intro progresses into a pulsing beat that carries the listener through the song. Although quite poppy, this song is softer and lyrically more self-reflective than the other tracks on the album, fitting for anyone’s summer playlist.

There is a brief stop for respite with interlude song Reprise 3. The ever-shifting variety of musical styles on this album makes an interlude like this a little redundant as a palate-cleanser but it can be appreciated as another nod to previous albums which contain a very similar Reprise 1 and 2.

Enter Shikari’s most recent single T.I.N.A. was released on 22nd March 2020 just weeks before the album was due to hit. Like The Great Unknown, this song has some of the heavier riffs and synthy switches that initially characterised Enter Shikari’s signature genre-busting style. If you close your eyes on the chorus, you can visualise the mosh pits thrashing and surging blissfully under a strobing Shikari light show.

Track 10, Elegy for Extinction is a musical marvel. No, you have not accidentally skipped over to The Greatest Showman playlist. There is an impressive performance from all sections of an orchestral ensemble and a rare glimpse of hope on this album as the glorious crescendo is reached but, inevitably, just before the 3-minute mark there is a dramatic twist as the tone ambles into a booming musical paradox and it seems as though skies will never be blue again.

Feeling quite emotional from the previous song, we drift into a hidden gem of a track. The lyrics of Marionettes (I. The Discovery of Strings) are smart and delicate, themed around the concepts of truth and deception, as frontman Rou (Reynolds) gets deeply metaphorical about the puppets of Society and their ‘master’. The verses are dark and mysterious and there is so much power and energy in chorus. I dare you to try and remain still whilst you listen to this one. On the sequel track Marionettes (II. The Ascent), it feels like we are at a rally for a revolution.

We take a break from the revolutionary rhetoric of the previous tracks, on Satellites* * as we discover a modern-day love song. Rou’s use of metaphors is smart and subtle in this track, and it takes a few listens to appreciate the depth of the lyrics around contemporary relationships.

The penultimate track, The King, was the second song to be released this year, just a few days after the video for { The Dreamer’s Hotel } was released. With lyrics such as “I grab my sword and swing, But I go and pull my hamstring, f%&k!” and the general pace give a feeling of rose-tinted lament for days gone by and frustration. As in The Dreamer’s Hotel, I enjoyed the antagonist caricature that has been created to exemplify societal problems. With the punk-esque anthemic chorus, this track is sure to elicit exceptional bursts of energy and volume from the crowd.

On this album Enter Shikari have succeeded in paying homage to their early synth-drenched alternative rock sound, whilst simultaneously demonstrating progression through their impressive scope of instrumentalism and production. Lyrically, we also see progression from the self-referential frustration theme of the last studio album. Songs on this album provide scathing social commentary, with a more external focus. Akin to the bands that mark their emo-kid generation, Enter Shikari are masters of invoking a spectrum of moods through music and lyrics, however, unlike their peers, Enter Shikari are also masters of musical shape-shifting, exploring and conquering uncharted sound uncompromising excellence and legendary electro flare.

You can stream the album on Spotify here

All words by Alice Monty. Find her author archive here