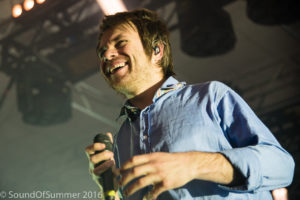 Alan Ewart catches up with Rou Reynolds and Rob Rolfe from Enter Shikari to talk politics, nuclear weapons and their links to Enter Shikari’s music.  We even found time to discuss Donald Trump and Jeremy Corbyn.

Enter Shikari recently completed the UK leg of their biggest headline tour to date.  With venues like Nottingham’s  Motorpoint Arena and London’s Alexandra Palace on the agenda it is a massive step-up for a band who remain resolutely independent.  We caught up with the boys prior to the Nottingham gig to delve a little deeper into what makes the band tick.

As I arrived for the interview I found the guys hard at work in the dressing room.  Rou Reynolds was huddled over his laptop reprogramming some of the lighting and graphics for tonights show.  It’s clear that Enter Shikari are perfectionists and the band are on record as saying that they intend to make every show the best one ever.  Things go wrong when you are bringing stadium quality lighting and sound into an Arena show and on this tour Enter Shikari have complicated things still further by introducing true surround sound as a feature of the show.

In my experience every interview has its comedy moment and on this occasion it came before we even started to talk.  As Rou was busy programming and Chris was nowhere to be seen I sat down with guitarist Rory Clewlow and drummer Rob Rolfe.  As I took my coat off Rob noticed that my shirt carried a quote from the late great Tony Benn.  Rob commented that he was a fan of Tony’s and had been since he saw him talk at a conference on political spin in the media when he was just 16-years-old.  I said that I wanted to talk about the political message in a lot of Enter Shikari’s songs.  With that Rory jumped up and went to fetch Rou as he said that Reynolds writes all the lyrics so you are better talking to him. 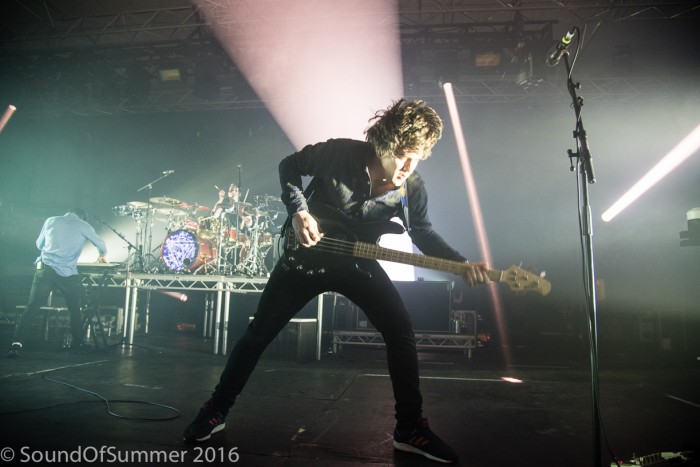 I hadn’t met Rou before as he had been ill the last time I interviewed Enter Shikari.  Off stage Rou is a gentle and thoughtful man, quick to smile and charming to chat to. So much so that it was clear that both he and Rob would happily have chatted all day.

I explained that I wanted to talk about the macro political content of Enter Shikari’s music, especially over the last couple of albums.  We started out by talking about the exploitation of resources and climate change, topics that Reynolds takes on with alacrity in songs like Arguing With Thermometers.

Rou says that “the last climate change summit was probably the most productive to date, they at least emerged with some targets rather than the usual ‘we’ll discuss this at the next summit.’  There was less finger pointing and everyone seems to be taking some responsibility.  It is difficult because the oil lobby is so powerful.  Whilst there is a profit to be made by damaging the earth capitalism will stunt every effort to tackle climate change.”

“Certainly when you look at our current government you still see these revolving doors where people come out of politics into positions with oil and fracking companies.  In many ways its understandable, we all want to provide for our families and we quickly adapt to any improvement in our lifestyle.  In may ways it’s greed.”

I asked why they thought that there is a reluctance in the UK to move into make money from renewables as the opportunities are certainly there right now.

Rob says that “there has been that option for so long and it’s clear that with the right will we could power the world with clean energy, the obstacle is that so many people make so much money where they are right now, why change.  It is infuriating.” 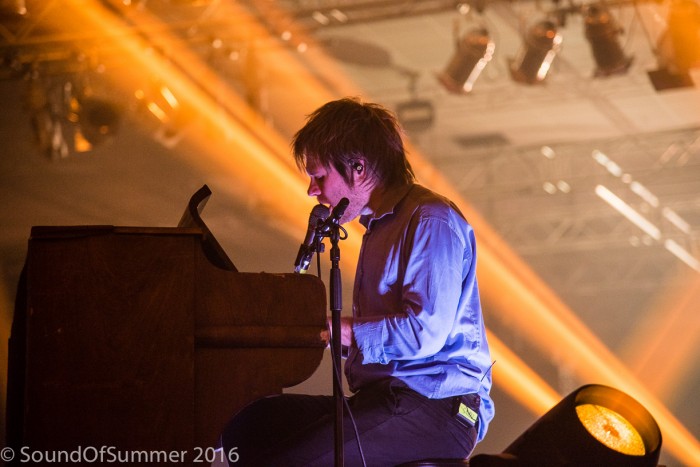 The subject turned to the frightening prospect of Donald Trump becoming US president.  Rou doesn’t think that Trump can get elected but recognises that he “may have too much faith in people”  but he hopes that the American people will see through a man that many see as a cheat and a liar.  The recent Channel 4 documentary on Trump shows that he was expelled from school for bullying and was a proper mama’s boy when he got sent to a military school.

I pointed out that whilst Enter Shikari do not attach themselves to any political philosophy they had been supportive of Jeremy Corbyn’s campaign for the leadership of the labour party.  I asked if this was at least in part due to Corbyn’s opposition to nuclear weapons, something Enter Shikari address in “SSSnakepit.”

Rou says “yes that is part of it but the reality is that for the first time Corbyn provides a real genuine alternative to big money, big oil.  You may not agree with everything he wants to do but there is no denying that it is exciting.”

I asked if the boys thought the money that is earmarked to replace Trident could be better spent elsewhere?

Rou admitted that they would be joining the anti-nuclear rally in Trafalgar square prior to their London show the following Saturday.

“Nuclear weapons are devastating, not just from the bomb itself but the fallout afterwards.  The world has changed, the argument that we need nuclear weapons to protect ourselves even though we would never use them no longer holds true.  Look at all the European countries that don’t have nuclear weapons they are doing just fine.  It just requires a bit of faith in human nature.”

I explained that I had a sense from Flash Flood Of Colour through Mindsweep to the most recent single release “Redshift” that Enter Shikari’s music had moved from threat to a post-apocalyptic vision.

Rou says that there is certainly a sense of that movement but says that Enter Shikari endeavour to give people “a glimpse of the big picture” through their songs.  Redshift was inspired by the amazing advances in our understanding of cosmology in recent years but if we can get people understanding that the “big things should overcome petty politics that’s great. We don’t want to force politics down peoples throats but if you can express the really big issues through your art and lead people to a better understanding of the world then that is a beautiful thing.”

I wrapped up by asking how the acoustic gig they held for a small number of friends and fans in an unused theatre at Alexandra Palace had come about and whether it might lead to an Enter Shikari unplugged album.

“Well we were offered the use of the room and leapt at the chance.  It was unusual for us as we don’t really do a lot of stuff acoustically, we like to mix it up.  It was a beautiful location and we had a couple of weeks to practice it so it was nice to be able to do something that was really different for us.  I don’t see us doing an unplugged album in the near future.  Once we finish touring the Mindsweep we want to sit down and work on the next full band album.  We have some initial ideas in place but it will take some time to pull it all together.”

With that thought in our minds we decided that it was time to wrap up and let Enter Shikari finish their preparation for a show that was to blow me away a couple of hours later.  You can read my review of the show here.