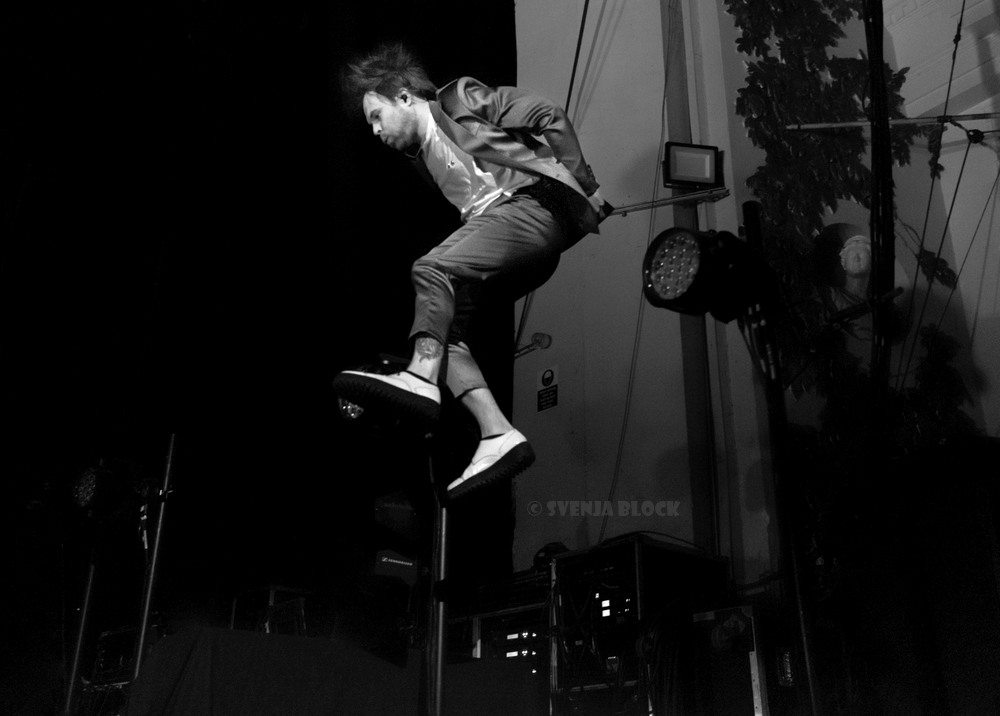 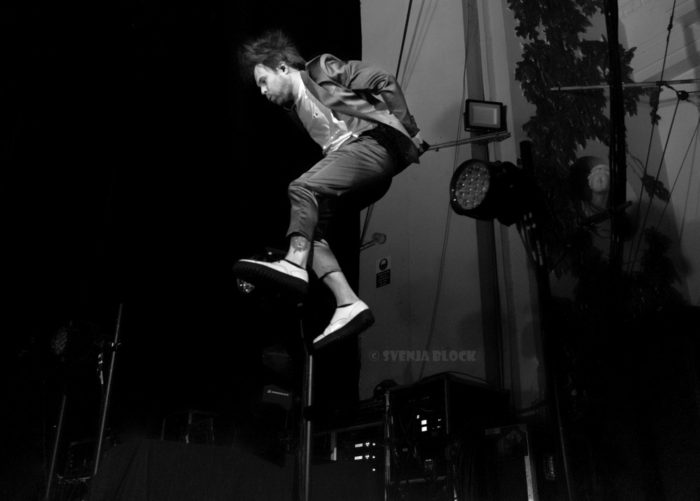 Enter Shikari’s ‘Stop The Clock Tour’, having taken a seasonal break, continues its comprehensive ramble about the UK. Tonight is the much-anticipated hometown show.

Brixton’s O2 Academy is packed and full of, for the most part, bubbling excitement, for this sold out gig. Three bands on a Saturday night and few people are planning to take it easy. However, you could also palpably feel an undercurrent of agitation here and there: it wasn’t pleasant but not pervasive.

Black Peaks begin the night by plain out shaking the audiences very bones. Will Gardner’s roaring delivery is a captivating showcase of ear pulverising skill. The band providing a polished progressive post-rock hardcore with enough layers to keep it interesting.

For some people, Palaye Royale were and are a problematic choice for a support band. We, humans, are flawed, complicated and capable of malevolence’s both small and immense. We are also phenomenally creative, capable of astonishing achievements and constant development. Resist negative reactionary tokenism. Use your energy, passion and truth to impart and inform. Social media lynching, and antagonistic posturing, while a band are playing for you, enlightens no one, evolves no one and ultimately spotlights only your hypocrisy. 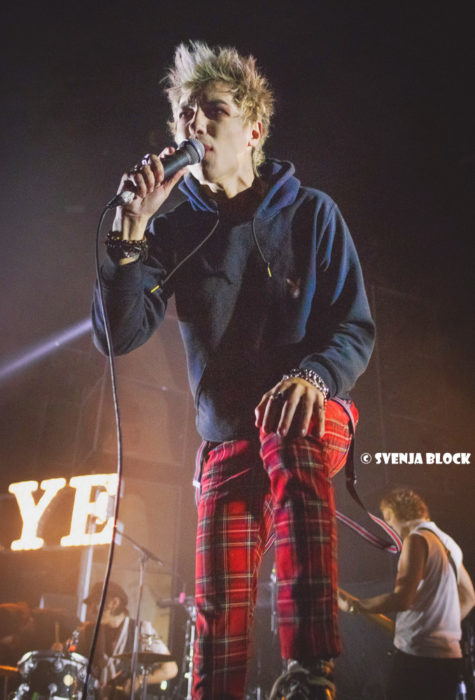 Sebastian Danzig and Emerson Barrett take to the stage. There is an air of rigidity from pockets of the audience, wasting not a second contemplating it, singer Remington Leith arrives and heads straight into Don’t Feel Quite Right. Coincidence or a flash of humour to open the set? It is, understandably, a strained start. Undeterred, Palaye Royale did not hold back, giving everything, they had.

Delivering an energetic and dynamic performance. Hurling through new and older tracks including Cocaine, Get Higher and Mr Doctor Man. Remington’s voice sounding honest and raw addressed the audience in air clearing call and response. Say fuck you to me he requested of the audience – they did, again he shouted and again echoing his words they expelled their feelings. The band then launched into Fucking With My Head. While lyrically simple and repetitive in the context of current events: it’s a punch in the empathy.

Impossible to know if those that came with determined vilification felt any different at the end. However, Palaye Royale’s set ended with a warmer response than it started with. Their skilful knack of creating very immersive and uncompromising rock n blues with a punk edge is so well delivered then maybe, just maybe, they did.

Enter Shikari have, and maintain, strong roots deep in post-hardcore, alternative heavy rock and electronica. Even so, the band has certainly evolved over time to a more nuanced sound, that incorporates a wealth of genera. Their willingness to experiment has meant Enter Shikari aren’t definable by genre and maintain a category all their own.

The Sights, its cute electronica, huge chorus and crescendos to rival Beethoven’s 5th, opens the set. It is a tease, a taste, a tidbit of what’s to come. Shaking Brixton Academy from sloped floor to art-deco curved ceiling with Step Up, Labyrinth, and Arguing with Thermometers. Each a host of Rory Clewlow’s gratifying guitar riffs, lush chord progressions and unapologetic hardcore breakdowns that sweep you up. Reynolds vocals surge from rapping, shrieks, chants and some sweet sonic onslaughts.

Rabble Rouser, Halcyon and Hectic, a contender for the Teenage Kicks for millennials, follows. With perceptive sloganeering, Enter Shikari create both unconventional protest songs and introspective delves into the human psyche. There is a brief but effective respite, Shinrin-Yoku its embracing euphoria revitalises and refreshes a breathless crowd. The electrifying show continues with Slipshod, The Revolt Of The Atoms, Gandhi Mate, Gandhi. Using their lyricism, voices and musicianship disarticulating the established uniformity of governments with sincere emotional intensity.

The set flows comfortably into Airfield and Undercover Agents some intimate lamentations weighty and filled with that I’m-about-to-fracture feeling. We are gifted a chance to re-visit this enchanting and intimate experience with Reynold’s starting the encore with a solo performance of Take My Country Back.

Enter Shikari have provided us with a host of auditory incursions, the between track chat was centred on being considerate to people as well as acknowledge of the Shikari fan base. As the final confetti cannons shower us with baby blue and white paper rain. Brixton’s Academy is filled with 5,000 voices repeating “I’m gonna live outside, live outside of all of this”. The band and audience pushing their vocals to the limit of cheering. It’s the only way to show our appreciation for some of the most overwhelmingly, intoxicating and cathartic sounds that have ever been slammed into our body’s, minds and souls and done so via the most incredible of performances. 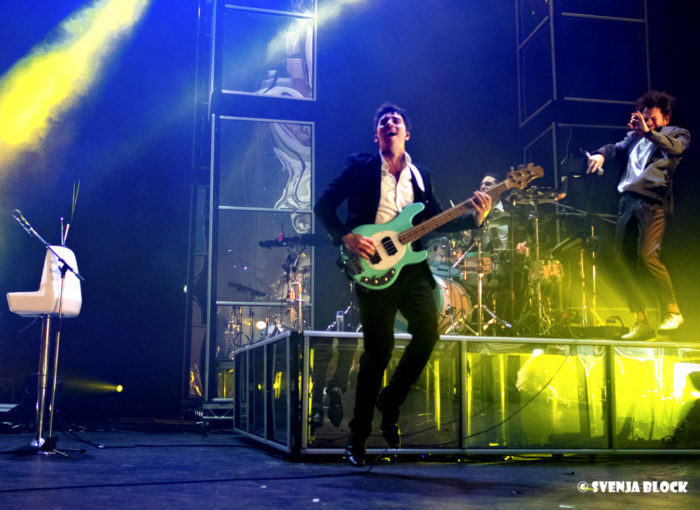 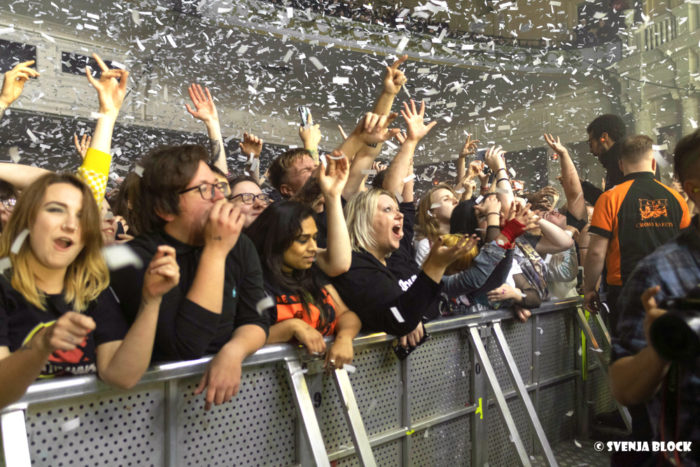 Tickets are on sale now, from the usual retailers and via the Enter Shikari official website. Some dates are sold out, however, please avoid secondary ticket site with high fees and inflated ticket prices. Consider Twickets a fan to fan second market ticket site that only allows sale at face value or below.

Live Review by Katie Clare. More news, articles and interviews by Katie on Louder Than War can be found at her Authors Archive.

Katie can also be found on Twitter where she tweets as @tokyo_katie and Instagram as tokyo_katie_captures her feed is devoted to captures from shows past and present.