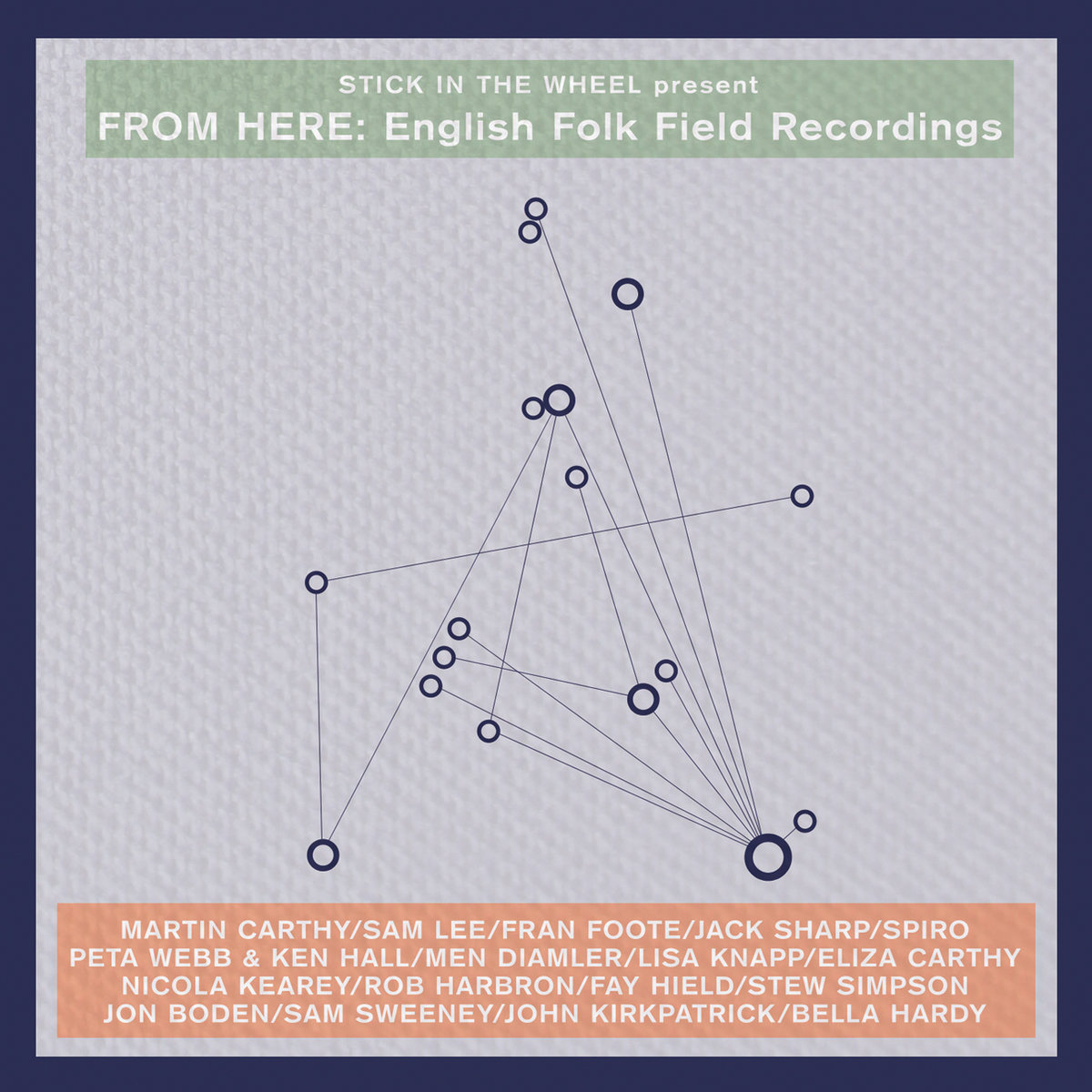 With a growing status  as an uncompromising – some say radical – band whose brand of folk is far removed from the stereotypical secure and cosy image, Stick In The Wheel take on a new guise.

Their ‘From Here’ is a  collection of material, titled after the band’s debut work and record label; produced and curated by l Ian Carter and Nicola Kearey from Stick In The Wheel.  Their mission, like  latter day Cecil Sharp styled song collectors, has seen them travelling up and down the country gathering folk songs from high and not so high profile folk musicians. And with the Stick In The Wheel reputation, who could possibly refuse?  The names, from the Carthy’s to the Boden and Hields and beyond, to lesser known although no less vibrant and effective, all turn out to deliver what are essentially balls out performances with no frills.

Recorded as the title says, in the field, literally in some cases  – Martin Carthy is set up in his back garden; back rooms, bank vaults and kitchens  are all utilised to capture the essence of what traditional folk is about. Immediate and intimate – the duo have nailed it in achieving the intimacy and the ambiance of actually being there in the room. The recordings have a resounding sonic  clarity which belies the nature of their simplicity.

Naturally there are a couple of tracks from SITW’s Nicola Kearey (‘Georgia’) and Fran Foote, whose ‘The Irish Girl’ has its own back story in her  growing up with the song as part of her upbringing. They’re  both added to the set as nature intended; it’s what they do best and heartening  to see them encouraging their peers to take up the baton.  Similarly, the extensive map provides an insightful and thought provoking  guide through the material; so much so that there’s such a lot to appreciate.

Selected highlights  might be Sam Lee’s ‘Wild Rover;  a contrast to the usual rowdy version, while Stew Simpson’s regional tone belting out  ‘Eh Aww Ah Cud Hew’ encapsulates the essence of the project and the spirit of folk music –  people heartily singing  the songs of the region in their own accent. Some of the tune highlights include   Sam Sweeney’s  ‘Bagpipers/Mount Hill’ and ‘Young Collins/Getting Up Stairs’ by the underrated concertina master Rob Harbron, a pair who as part of Leveret are embracing the way in which  traditional tunes continue to evolve.

One recording  of interest is  to hear the stripped back version of ‘The Sea’ by Eliza Carthy in comparison with her bigger scale Wayward Band arrangement. Which is the most successful – a solo singer with the raw passion or the might of an eleven piece band? The stark plucked version or the big brass driven drama? Maybe neither is better or worse and maybe it’s unfair to draw a comparison. Just an interesting point which emphasises the value of the ‘From Here’ compendium.

Overall though, ‘From Here’ is a journey of discovery;  from the choices of material which the bigger names pull out of the bag (check out Nicola quizzing  Martin Carthy why he’s chosen ‘The Bedmaking’)  but also in unearthing one or two names that might have flown below the radar. While some people who couldn’t fit into the schedule or may have  missed out this time, the promise of  “there’s always next time” is quite thrilling.  The thrill in anticipating  the continuation of a fascinating project from a band who continue to challenge  and present folk songs in the most natural and traditional way possible.

You can listen to ‘Georgie’  from the album here: