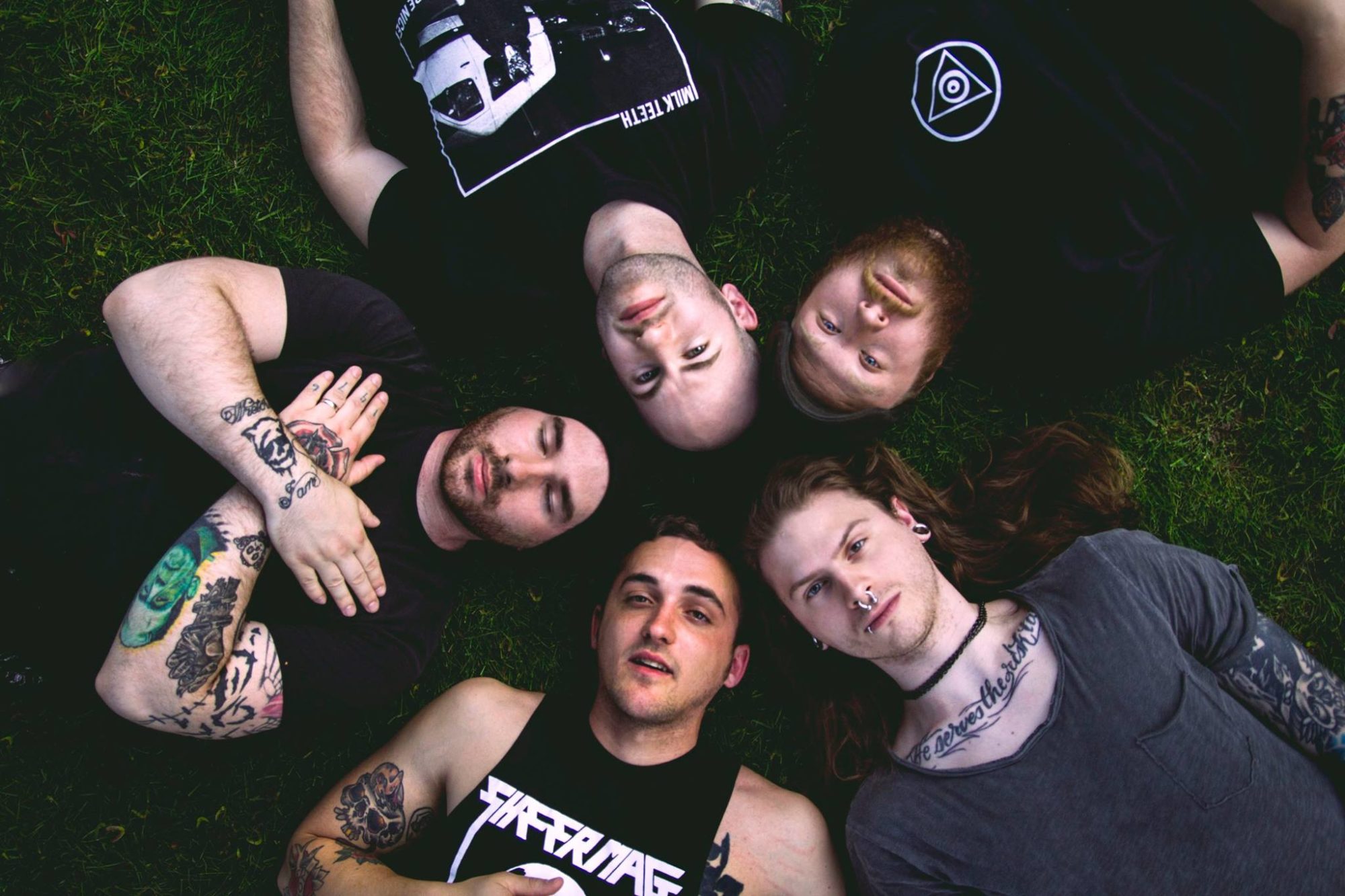 The Boston-based punk rock band, Energy are returning to the UK for their own headline tour, having won over a new army of fans and created many special memories during their Spring stint supporting Creeper earlier this year. They’ll be sure to deliver their intense performance that rebelliously extends over many diverse genres for the ten-date tour. Energy’s front man Jason Tankerly aka Tank, guitarists Nick Sullivan and Steve Duarte met up with Louder Than War’s Katie Clare to talk about the life of Energy past, present and future.

New to Newcastle and it’s University campus I’m a little-lost finding the right door when Energy guitarist Nick Sullivan calls up and confirms where I’m currently positioned advising “We are on the way there now”. It’s not often half a band takes the time to come find you outside the venue. Their honest thoughtfulness is just one of the many aspects that make Energy such a positive band to see perform and listen to as everything clearly this stems from who they are as people.

Deciding that the band’s tour bus is going to be the most suitable place to chat, an unexpectedly comfortable, peaceful and bright lounge area. Once settled I asked if someone hadn’t heard of Energy previously what is the condensed history of the band they should be aware of?

Tank: “Around the age of 19 or 20 I started a band. As of 2006 we just wrote a few songs recorded a demo, it seems to catch on like wildfire and we started touring immediately. 2008 we signed to Bridge Nine Records, out of Boston, we recorded our first album, Invasions of the Mind. Our first full-length album and toured extensively off that album – forever it felt like. Toured with H20 and Bane then to Europe with Slapshot. In 2010 we released an EP Walk into Fire and since then I’ve been writing songs and building a new line up. There has been a revolving door of musician’s in the past but, now we finally have a solid group of musicians behind me and they are very dedicated and devoted so, we are back on the road now in support of our latest album Apparition Sound.”

Louder Than War: There was a time where it was difficult to see how Energy would continue.

Tank: “A lot of the time I questioned myself I said to myself – should I give this up. Throughout the years I feel like I’ve heard more discouragement than encouragement. Between 2010 because everybody viewed it (Energy) as a one man band and that I was holding onto my past and that we were not moving forward. It is not hard to get a grasp on the general consensus of what people think of you with the internet now. It was a struggle to stay head strong and keep telling myself I was going to make Energy work. I was working with a group of musicians that were just not dedicated they were talented at what they do but they didn’t care about the band. One day I just hit up Nick and said do you want to play guitar for Energy because I know he was into the band and seemed a dedicated person. He said he could put together a decent lineup by the end of the week who’d do it full force. It was like the movie Yes Man I was like sure take the risk – I’ve got nothing to lose at this point. He did and we played a show with the new lineup within a week. They learned the set and played a show within a week. I felt like I’d met the entire band just two days before the first show.”

Louder Than War: So you must have been confident that there would be cohesion with the guys you were to bring in before even getting that call?

Nick: “I have been working these other guys, two of them ten, fifteen years and our drummer for the last two years so I knew that all the people in my mind when I spoke to him about putting that line up together. I know it would be the perfect fit.”

Tank: “I couldn’t believe it and then a week letter we get an email from Creeper saying hit us up if you want to get into the Tiger Army show in Boston. So I did and during that correspondence, they made a formal offer to come over to the UK.”

Louder Than War: That kind of real belief in another band is something that seems to have been lost in recent years.

Tank: “Yes I think there is a lot of We’ll we are not entirely sure if Energy will draw, they are a risk, they are a liability – to hell with them. Instead of we like this band and their cool guys or whatever reason let’s take them on tour for the camaraderie. It’s shocking what we’ve have been denied because of those aforementioned reasons.”

Louder Than War: So economics?

Tank: “Which I understand, from a financial standpoint it is just disheartening. This is great though, it is mind blowing to be here. I wanted to just hit the road and this is the want I want our life to be.”

Louder Than War: This is the first-time Energy have played the UK, how have you found the audience differing between here and the US?

Tank: “They care. They act positively to us instead of indifferently. Personally, I’d rather have people hating us than be indifferent. Indifference is the worse I’d rather people threw rotten vegetables because at least that means I’d be getting a rise out of them. The audience here is so enthusiastic they want to like us and I have never had such a warm welcome anywhere. This is already the best tour I’ve ever been on. I don’t know if it is because our records are resonating better with a newer generation than the audience when they first came out years ago. It just seems people are more receptive over here and that – that is amazing.”

Louder Than War: I am enjoying hearing the older tracks alongside the newer ones on this tour, I feel they’ve really stood the test of time.

Tank: “The songs we play live from back then are typically ones I’m most proud of and want to play them for the rest of my life. That is not to say we won’t ever play any other older songs.”

Louder Than War: How is this for you guys who were not around at the time of those releases?

Nick: “I have a non-bias opinion on those songs because I wasn’t in the band when they were created, and I enjoy all of them. The first thing I ever heard out of Energy was New Worlds Of Fear stuff and I got into that and the other stuff I gradually got into. I enjoy playing it all and love seeing people enjoying it too be it the Punch the Clock stuff or Invasions of the Mind stuff. The kids here in the UK really seem to like the new stuff, that’s really cool It makes sense because it mesh’s with Creeper’s sense of style really well.”

Louder Than War: When Creeper announced, you were playing on their UK tour their fan base really rallied around sharing your music and connecting with you something which you were all really on board with this, was that reaction expected?

Tank: “I feel like their fans have an emotional vibe and both Creeper and Energy both give off one that is dark, sombre and melodic and you can really feel something in the music – if you listen. I think they were looking for more of that and a lot of them found it in us too, I think.”

Louder Than War: You released a new song The Witching Hour around the same time as the announcement.

Tank: “We recorded The Witching Hour to come over here with and it was a good way to make everyone in this lineup part of this band. To be part of the thread of this band, to be part of the legacy of this band and not just be playing songs that existed before, It is a song we all helped to create. We want to write and record a new full-length album, it is a priority of mine to do that with all new material because it feels too long since we’ve done one.”

Louder Than War: Lots of hard work to come.

Tank: “It is hard work and you have got to give a shit there is no phoning it in … unless you stop caring. I couldn’t sleep at night if I did that – which is easy to say as a broke musician. But you have to care,  like if a melody is off in the studio I will have a panic attack if it is not perfect.”

Nick: “I appreciate his perfectionist ways because it’s the only way anything’s going to get done right. I’ve seen it first hand and it is a lot less worry on me as I’m a perfectionist too.”

Steve: “It is contagious as well, once everyone wants to get it right you’ll work much harder so you do get it right.”

Louder Than War: Does that extend to going back to older recordings?

Tank: “Always, but I heard a quote I forget who said it art is never finished it’s only abandoned. You can tweak it as much as you want and you can spend forever on it but at some point, you have to say enough is enough and to release it and send it out into the world. It is a balance between perfectionist and psychotic behaviour.”

Louder Than War: Looking to the future will Energy be coming back in the UK playing their own tour?

Happily, that positivity has born success and Energy will return to the UK for a 10 date headline UK tour this summer.

Along to are Southampton’s punk rock outfit Miss Vincent providing undoubtedly energetically fierce support. The tour starts in Manchester at Satan’s Hollow on July 29 and the tour will continue as follows: