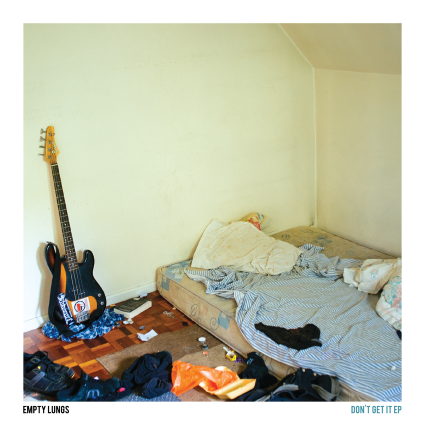 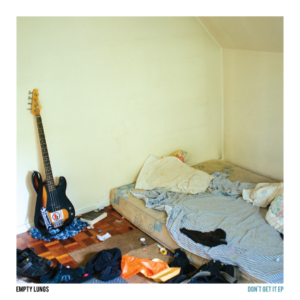 Though the politics and nihilism of punk might well leave a lot to be desired in the scheme of things, the movement possessed a DIY spirit and sense of community that’s difficult not to admire. One band who seem to embody the very idea of those things, it’s Belfast’s Empty Lungs.

Having been active for almost six years, the three-piece have suffered the usual setbacks faced by band’s in their position; job losses, line-up changes even a housefire that left vocalist/guitarist Kev Jones homeless in the lead up to their first European tour. As a result, Empty Lungs have forged a bond that runs far deeper than your average band, something that’s evident in their most recent EP, Don’t Get It.

Bridging the gap between punk and ‘90s slacker rock, Don’t Get It is three tracks of furious and fuzz-soaked melodies that burns bright and burns brief. The title track and opener is barely two minutes of buzzsaw guitars and gang chant vocals that calls to mind the likes of Andrew WK.

It’s second track Losing It, Finding It where stuff really begins to take hold however. Strokes-like guitar jangles give way to a straight up skate-punk chorus that falls somewhere between Beach Slang and Bad Religion, and much like both of harbours a lyrical sensitivity that continues in to the record’s final track, Fragile.

Though barely eight minutes long, Don’t Get It is a bold statement from a band that epitomise Punk’s DIY ideals without getting bogged down by its politics. Bristling with an undeniable energy and optimism, it might be over far too quickly, but it’s proof that Empty Lungs aren’t just a flash in the pan.