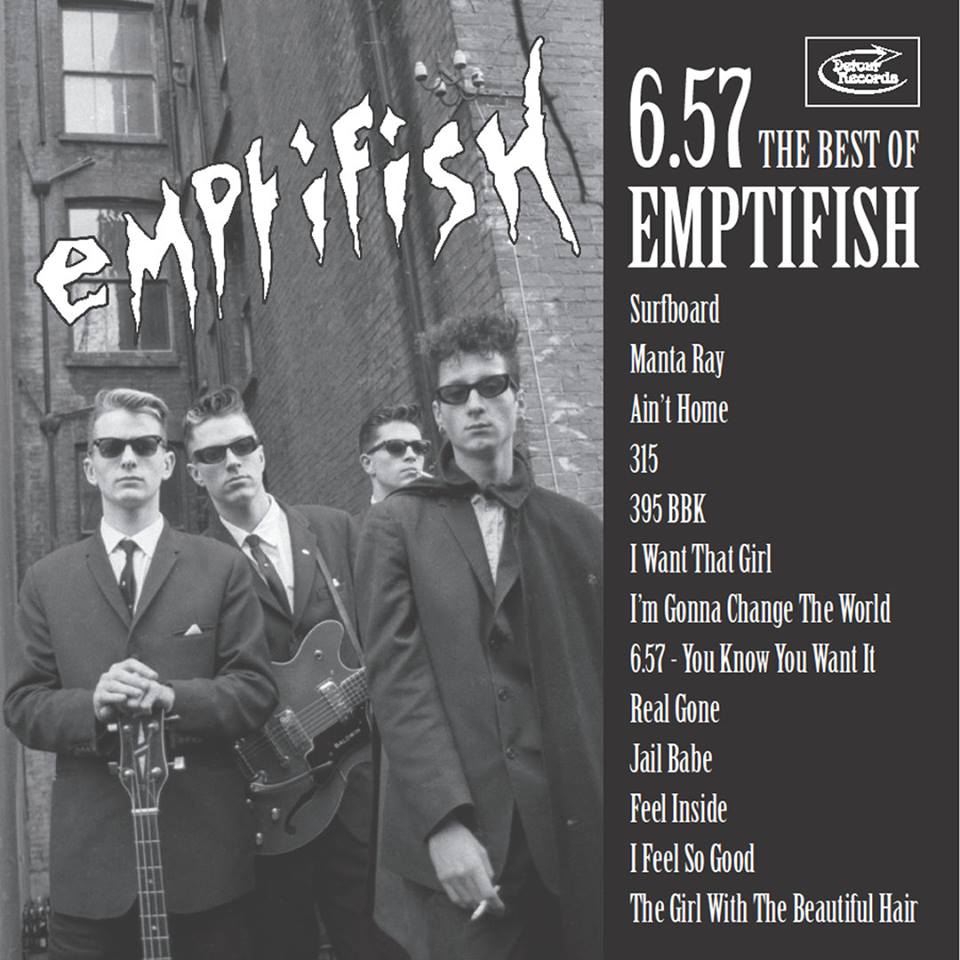 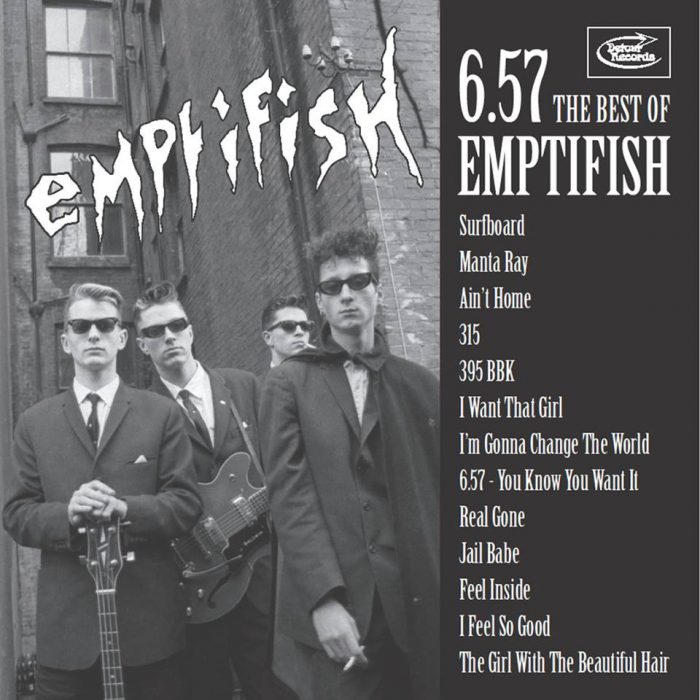 Truly legendary Portsmouth Surf-Punk Rock’n’Roll band finally get an album released 29 years after they split. And it’s a beautifully packaged work of sheer genius, if you’re a fan of the Cramps, Milkshakes and so on, says Ged Babey, who is.

These are the words of Pat Gilbert (author of Passion Is A Fashion: The Real Story of The Clash,  editor of Mojo magazine ) in Record Collector  magazine, 1996.

“The best band I’ve ever seen were from Portsmouth. They had so much raw talent it hurt. When they stood together on stage, motionless in a cyclone of trebly noise, they emitted the kind of aura I imagine The Beatles had in the early 60s. They were young, handsome, aloof – the most exquisite-looking ’80s garage band you could ever dream up. The girls adored them, the boys wanted to be them. The Pompey football hooligans ‘adopted’ them and the local authorities eventually banned them from performing (due to the fact that nearly all their gigs ended in a full-scale riot). In fact, Emptifish – as they were called – electrified Portsmouth for two years with the most thrilling racket cooked up since the Kingsmen knocked out ‘Louie Louie’ in some dingy 50-dollar studio. Like I said, the best band I’ve ever seen.”

And these are the facts;

Emptifish really were possibly the most under-rated Garage band to have come out of England!

Their story has been hidden away in obscure corners of the internet, until now.

This album contains 13 songs: both 7″ singles, a tune from their Live at Basins film, previously unreleased recordings.  It’s the South Coast of England, 1983-1987, and garage trash has just met punk rock, via 50s Surf, Elvis, Hamburg era Beatles, The Cramps and The Milkshakes. One band, their stylish fans and their football team’s infamous 6.57 crew define the devil may care attitude of an extraordinary time … and in the process get banned out of existence.  This is the vinyl album that was never released ….

And this is me.

I don’t have many regrets in life, but one play of this album and I seriously regret not ever seeing Emptifish play live in their prime. I lived in the neighbouring city to theirs in 1984 for fucks sake!

That said, I  would not have relished the fact that most of their gigs seemed to be violent affairs due to the fact that Portsmouths infamous football hooligan ‘crew’ the 6.57 were among their fans. They adopted the band apparently. But then, Emptifish did write a song about them, albeit a slightly adapted mixture of Commanche and the Sid Presley Experiences Hup, 2,3,4. called 6.57 -You Know You Want It.

Which came first I wonder, the fans or the song?  Not that it matters now.  I’ve never been to a football match in my life believe it or not, and it’s the music I’m interested in.

The fact that in 2016 Emptifish still sound this fresh, alive and head and shoulders above 99% of any other music from the timeframe is more important.  It is also very good indeed within its own genre, or mix of genres.

The Cramps and the Gun Club are adored all over the world, by bad people with good taste,  and rightly so, but Emptifish at times, get pretty close to their feral genius of both. In the Medway towns the Milkshakes were kings of this kind of sound, but Emptifish almost matched them from the evidence presented here on this 13 track LP (one instrumental, one cover version and eleven original songs).

Like all of the bands that were influences and contemporaries, the look and the accouterments were as important perhaps as the sound. Quiffs, sunglasses and vintage cars and guitars were essential. They were cool mothers. The sixteen page, fully illustrated booklet that tells their story insists the band were so influential they changed the way locals dressed and wore their hair.  I know this is true as to this day members of Portsmouth punk band Archive 45 still sport brylcreamed quiffs.

Emptifish had split up seven years before Tarantino made his first film, but would’ve been perfect to soundtrack it with their cavernous surf sound and even be in it as cool-as-fuck extras. (Surfboard is a great piece of archive video by the way, but the weakest track on a near perfect album. Don’t judge the album by that alone!)

“We found my echo-box in the wreckage after Buddy Hollys plane crashed” is one tall tale, told in the booklet to Tony Rollinson, band biographer and number one fan.

“Both Ian and Ricky favoured Hofner guitars, Ricky using an original 60’s violin bass and Ian partnered his selected model (He has a collection) with what seemed at the time, a very beat up WEM copycat tape echo unit. This gave them a seriously unique sound which very few bands were capturing at the time.” Said Darren Ross here.

They claim to have written 200 songs in their four year existence, but only the thirteen here have survived to make it onto this beautifully packaged album. (Expensive at £19.99, but worth every penny; Vinyl CD, DL code and booklet, the album sleeve is “Designed to look like an original 1960’s sleeve, with flaps on the back, laminated on the front, with a matt finish on the back and hand-numbered.. in itself it’s a work of art ” according to Detour.  And it’s true.

The songs fall into four categories.  Instrumentals, songs about girls, ( I Want That Girl)  songs about cars  (395 BBK is the number plate of a favoured vintage car)  or fish (Manta Ray).

The cover version which Emptifish recorded, and closes Side One, is an obscure b-side by the Animals called I’m Gonna Change the World.  They make it their own and its a defiant, cocksure anthem with twangy guitar and harmonica and a great Eric Burdon lyric, calling for divisions (no more black and white, no more left and right) to be broken down and to “Just accept people as they are / Or this old world won’t get very far”. If you are gonna chose one cover to do, make it a fuckin’ good one, and they sure did.

I Want That Girl is so laden with echo and reverberations it almost sounds like its a Joe Meek dub or the Jesus and Mary Chain if they had preferred reverb to feedback. (395 BBK has a teenybopper audience screams as backing which also put me in mind of the Mary Chain as the screams become practically white noise.)

The piece de resistance is saved for last. That rarest of things; a song which is funny after repeated listenings and great musically.  It’s called the Girl With The Beautiful Hair and is a trip round the globe in which the band members in turn sample the delights of the opposite sex, and compare their hair. It’s spoken verses are countered with a great Beatles in Hamburg harmonised chorus and wall of sound guitars.  It’s playfully sexist and ludicrous, but just magnificent. Probably the greatest encore song you’ve never heard.

I know I’m prone to exaggeration, but this really is a great album for anyone into Surf-Punk  Garage Trash. An essential purchase and a piece of Pompey History.

The album is dedicated to bass player Ricky Sonic who passed on in 2010. The rest of the band play the occasional gig still and the album launch is at the Edge of the Wedge in Portsmouth on June 18th but is already completely sold out.

All words  Ged Babey whose author profile is here.