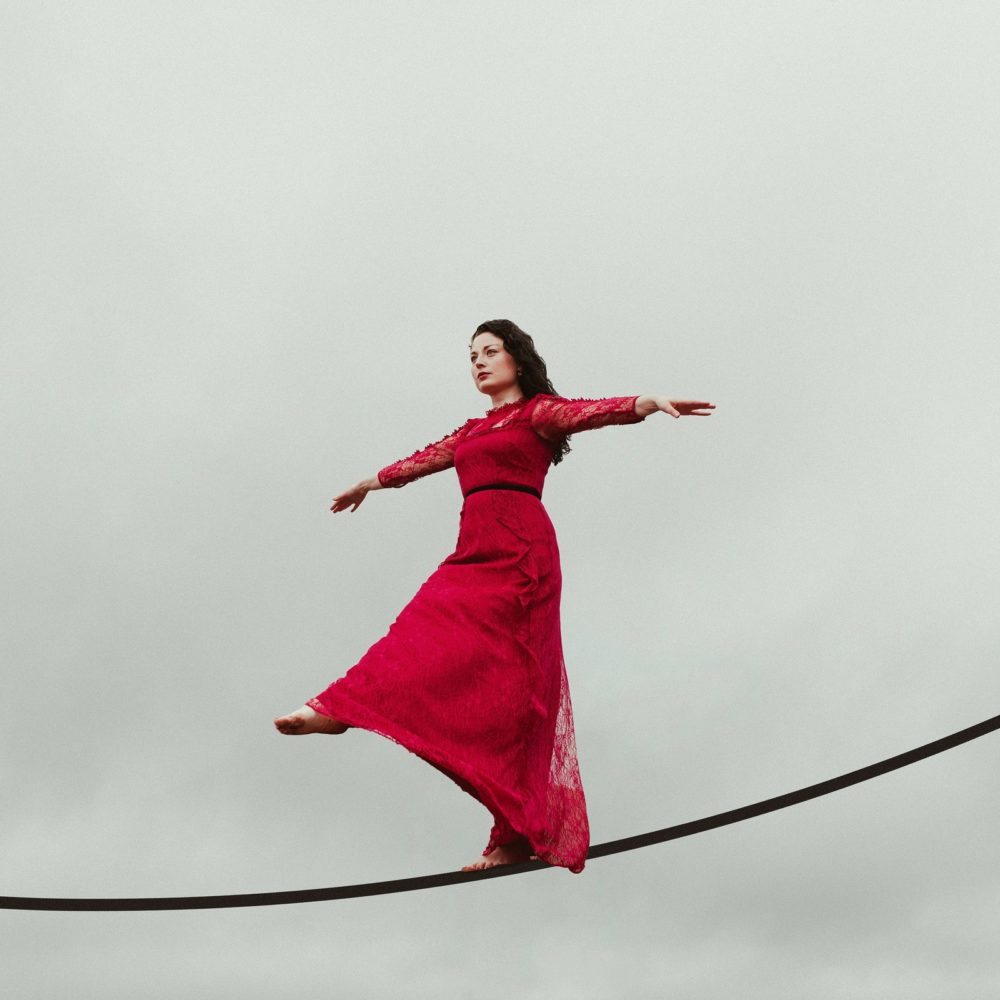 The second album from one of the fastest rising stars in the singer/songwriter/Americana vein, backed by a classy cast.

It’s an album of eleven original songs, bar the Irish trad. arr Come Live In My Heart & Pay No Rent, which is fairly original in itself,  her first album Siren Serenade having a strong folk direction. Producer of the debut Ben Walker is back this time on guitar along with John Parker and Matt Ingram providing double bass and drums in what proves a not too shabby little backing band.

It’s also an album that sees a confident (epitomised by the sleeve photo that shows her balancing one-legged on a tightrope) shift towards delivering a wider spectrum of material, from the edgier and atmospheric to a more country ballad style to piano ballad and then basic upbeat rock. The subject matter too, has her exploring the concept of ‘romance’ in its broadest sense, be it the wine and roses stereotype or the hope, loyalty, idealistic and optimistic alternative. Don’t expect then, to hear ‘love’ songs per se but be prepared to encounter a set that showcases the visions of the ‘hopeless romantic’ that Emily Mae confesses to being.

A soulful, yearning hope of Would The World Stop Turning? with the band’s full-on subtlety shows the hallmark of class in knowing just when and what to play as Wildfire follows with country swagger and opportunity to swing the pants a little.  However, it’s her name on the cover so there are moments where Emily Mae stands alone – almost – Take Me In and One Of These Days take her back along the solo singer-songwriter road where she’s paid her dues. At the core of everything though is a voice that’s rich and toned and with a dynamic quality that sees her shifting from the sensitive and tender to balls-out bluesy country rocking.

Ultimately High Romance a big, bold and confident album. Not quite swaggering but one that’s considerably shifted the goalposts from Siren Serenade. No mean feat in itself, but the progression in the songwriting,  the performances and the final polish (while surrounding yourself with people who have your back) is startling. Having experienced a tasty appetiser and now a full and varied main course (probably a good nine on Masterchef), what’s for dessert?

Watch the video of Come Live In My Heart & Pay No Rent: