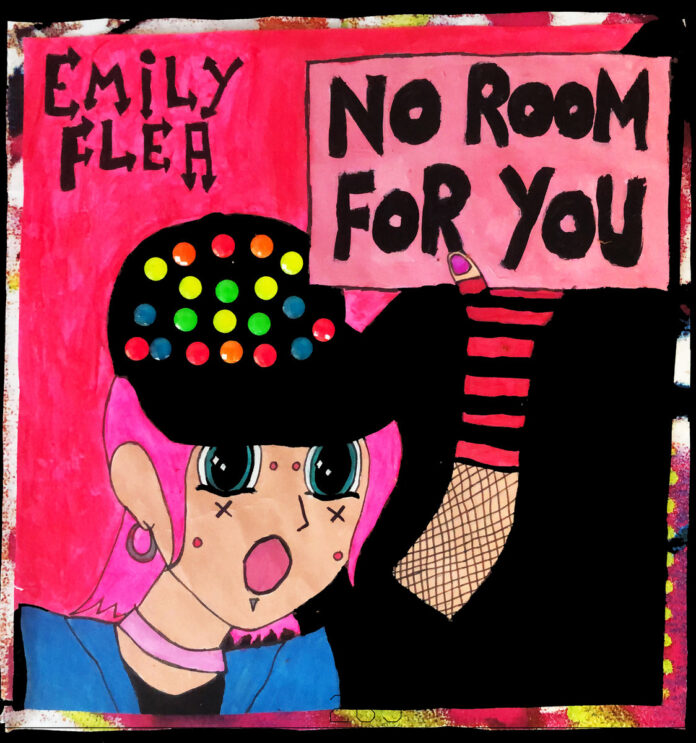 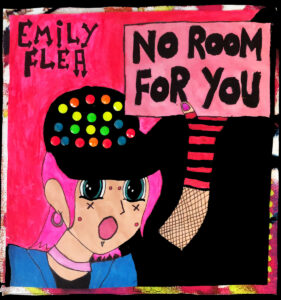 Emily Flea – No Room For you (Grow Your Own)

The word I could best use to sum up this 10 inch mini LP is angst. Angst is a key ingredient of punk rock and many of the best punk songs have been angry. And what is Emily Flea angry about? Emily is speaking from the view point of a younger generation and is angry about dirty old men and nasty old punks, plus mainstream society’s treatment of animals and minorities. Laying bare sexism, misogyny and other oppressive attitudes is all too often dismissed. If we don’t listen to voices like these do we risk becoming part of the problem?

There is a give-it-a-go naivety to the sound which coupled with a bouncy exuberance gives this a very 80s feel, when attitude mattered more than technical ability, resulting in some great records that would never have got past the A&R men of mainstream labels. There is a similarity to dayglo anarcho punks Rubella Ballet in places, and pop bands at the punky end of the spectrum such as Fuzzbox. The slightly off kilter vocals propel an earnest ebullience that bands like Action Pact used to do so well.

It strikes me that this record is really written for today’s generation of riot grrls and there’s doubtless an audience waiting for it, if all the old punks don’t snap up the available records first. The beautiful pink/purple and white swirly vinyl will probably have the record collectors swarming.

Park Bench Creep is a catchy little number and the first “fuck you” to perverts on the disk.

No Pride is a melodic indie sounding tune with a happy repetitive guitar solo that is definitely in Fuzzbox territory. It lists institutions cashing in on Pride…”The first Pride was a protest, but now it’s just an excuse, For everyone to get fucked and party all night. While the queers still suffer from regular abuse.” The way the extended chorus at the end ratchets up a few keys works nicely – and it’s a catchy one, at that.

No Room For You is a bouncy number with shades of Buzzcocks in some of the upbeat drums and guitar. It provides the soundtrack to a song attacking sexism, racism, homophobia, transphobia and ableism in the punk scene. The middle eight stands as a reminder: “It’s supposed to be about equality but all you do is spread hate and bigotry”.

Side A closes with Heartbreaker – a song Emily performed with The Fleas and featured on their debut release. The original was a snappy little 82 seconds. Reworked into roughly double the length it takes off more slowly, gradually increasing in tempo. It has more depth, sounding somewhat like a well produced indie tune.

Stuck in 77 opens side B with a tirade against old punks with a great line: “We are the future. We are the future. You’re gonna be dead soon.” Doesn’t pull any punches and had me tickled! The song takes on particular resonance when you consider the punks old enough to have “been there” in 77 are now far older than the Teddy Boys and “Grandads” they used to kick back against in their youth.

Never Enough is another punk song that could have come out in the early 80s. Fast and not too complex. This is no bad thing!

Get Away From Me has a nice chunky punk rock bass and varies between fast and slow tempos and is almost like a sequel to Park Bench Creep. It’s testament to the state of society that when younger women punks are following the “write about what you know” approach to song writing that this theme recurs. If you don’t think there is a problem with attitues to women, just watch old punks drooling over young women in bands like Maid Of Ace.

Like Side A, Side B ends with a re-working of a previous Emily Flea composition. No-one Hears The Screams closed the recent Exit-Stance 10″, and I was told that it was the first song Emily wrote. The subdued guitar, mournful bass, militaristic snare, haunting guitar line and use of delay on the vocals gives this a sombre feel. Given the subject matter – animal abuse – it strikes the right tone.

I guess one question to ask is “Would John Peel have played this on his show?”. I’m fairly certain he would have.

With sparse information on the sleeve, it’s a mystery who the rest of the musicians are but they certainly know how to play. I wonder if Rubella Ballet foks might be involved? The lyric booklet has the stylings of a teenage scrap book and goes with the overall feel. Another great release from Grow Your Own.

Available from Grow Your Own records.