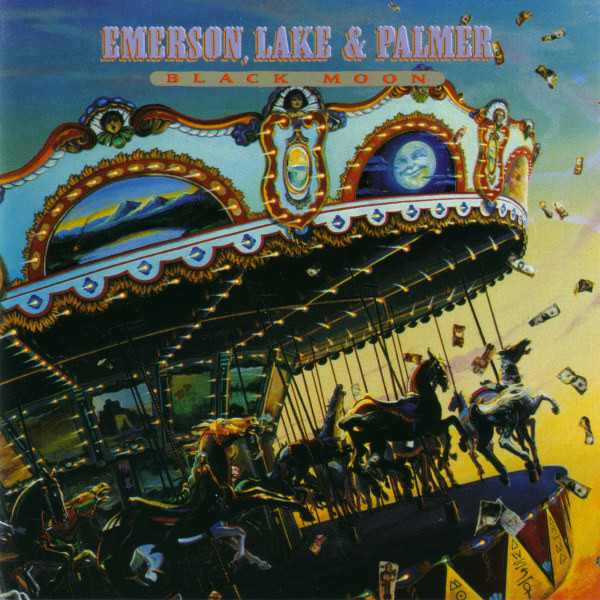 The ELP 2017 remasters  conclude with the final pair of albums from their recorded legacy.  We start our look at the series of re-issues  at the back end and with a pair of albums that could be viewed as one that showed a second wind combined with one that ultimately frustrated.

Having dissolved under something of a dark cloud with 1978’s Love Beach, which despite the general derision (some deserved) had its moments, the return of ELP some fourteen years later  held a sense of bewilderment. One  tentatively triumphant last hurrah came with a final swan song at the High Voltage Festival of 2010 and the subsequent deaths of Lake and Emerson in 2016 may have softened the blow of the sense of  disappointment that accompanied their latter years which could never ever match ELP  at their majestic world dominating seventies peak.

The ‘comeback’ album of 1992 not only set up a few years’ worth of touring, not quite in the scale as in their heyday, but also proved that Love Beach wouldn’t prove a disappointing  recorded farewell.  A chance to set the record straight – a feat they accomplished not necessarily with aplomb, but had Black Moon been their swan song, then the ELP legacy would have concluded with some dignity.

Taking a break from major lengthy prog epics to focus on more condensed and manageable arrangements, the gorgeous ballad Affairs Of The Heart and Footprints In The Snow showed how Greg Lake’s voice had impossibly even improved with age. Less is more, seemed to suddenly be something that ELP were more comfortable with; Farewell To Arms and Changing States including moments where you can appreciate the simple majesty although their penchant for reinterpreting the classic with progressive bombast surfaced on a dynamic shot at Prokofiev’s  Romeo & Juliet

The dramatic title track and Paper Blood (both ELP full band credited compositions) harked back to the better moments of the band focused music of the Works days and although not an album that would rank as one to compete with the output of their heyday, certainly one with which they could hold their heads relatively high. Nice cover too in the colourful funfair carousel painting that ‘might’ have been a thinly veiled reference to another carnival/Karn Evil that fans would appreciate.

The bonus disc which is a record of the  Albert Hall gig from the Black Moon tour saw the trio  given the homecoming heroes welcome. “It’s great to come back home!” declares Lake in a set that sees the best of Black Moon peppering a set of ELP choice cuts – the dazzling musicianship of Tarkus and Knife Edge and what was perhaps the their best latter era  long format track, Pirates, were welcome highpoints.  Live, the rich Lake baritone is still velvety smooth and there’s a focus on making their music fit into a contemporary setting and eliminating the indulgence sans the need to showcase their technical abilities of yore.

You can see Affairs Of The Heart from Black Moon here: 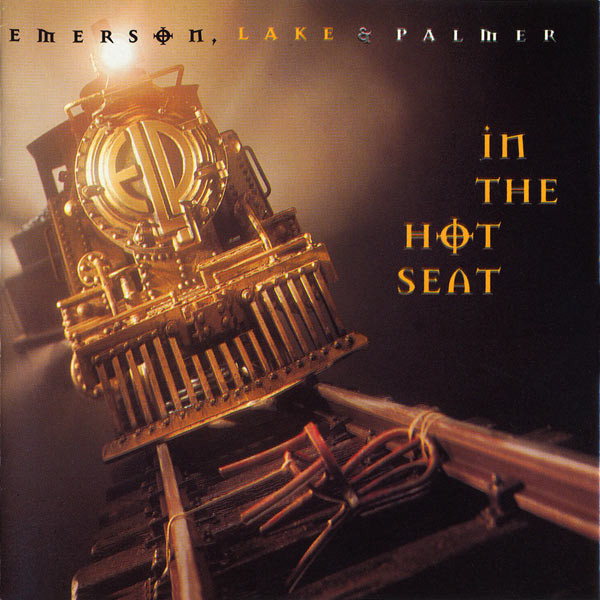 In The Hot Seat

The final studio work by ELP was more a case of one step forward two steps back. On the back of Black Moon and a successful  92/93 album/touring period, the return to the studio seemed doomed from the start. Long forgotten tensions re-emerged and the start of long term medical difficulties  for Emerson made for a difficult period.

The reliance on bringing in outside writers to contribute plus a puzzling inclusion of a cover of Dylan’s Man In The Long Black Coat given an eighties electronic treatment was a sign of lack of inspiration and how bare the cupboard must have been. There may not be anything quite  as regretful as some of the cringeworthy moments of Love Beach, yet nothing which matched the high points of that album of which there were undoubtedly several.

Hand Of Truth is as good a latter day ELP as you’ll get with some synthesised yet sweeping strings and Greg Lake’s Daddy touched a nerve with the real life incident instigated subject of child abduction. However, the opening gambit struggled to maintain itself against the  sign of the times electronic synth-ness of an album which is perhaps most guilty of  setting up the criticism. Gone are the days of graveyard Hammond organ and trademark moogs to be replaced by digital trickery. Thin Line and Street War – thinly disguised Miami Vice  soul – might have been better served done by Glen Frey in The Heat Is On style with pastel shades and big shoulder pads. Sadly, after recouping some of their kudos on Black Moon, ELP seemed unable to spot the opportunity to quit while their stock was relatively high.

The value of In The Hot Seat may lie more with the added extras that include recordings from the 97/98 period that again showed more restraint yet after the resurgence of the Black Moon period, seem more tired, but  in particular a truncated new recording of Pictures At An Exhibition, the heavily produced choral climax during The Great Gates Of Kiev closing section possibly worth the price of admission alone.

You can listen to  Daddy from In The Hot Seat here: