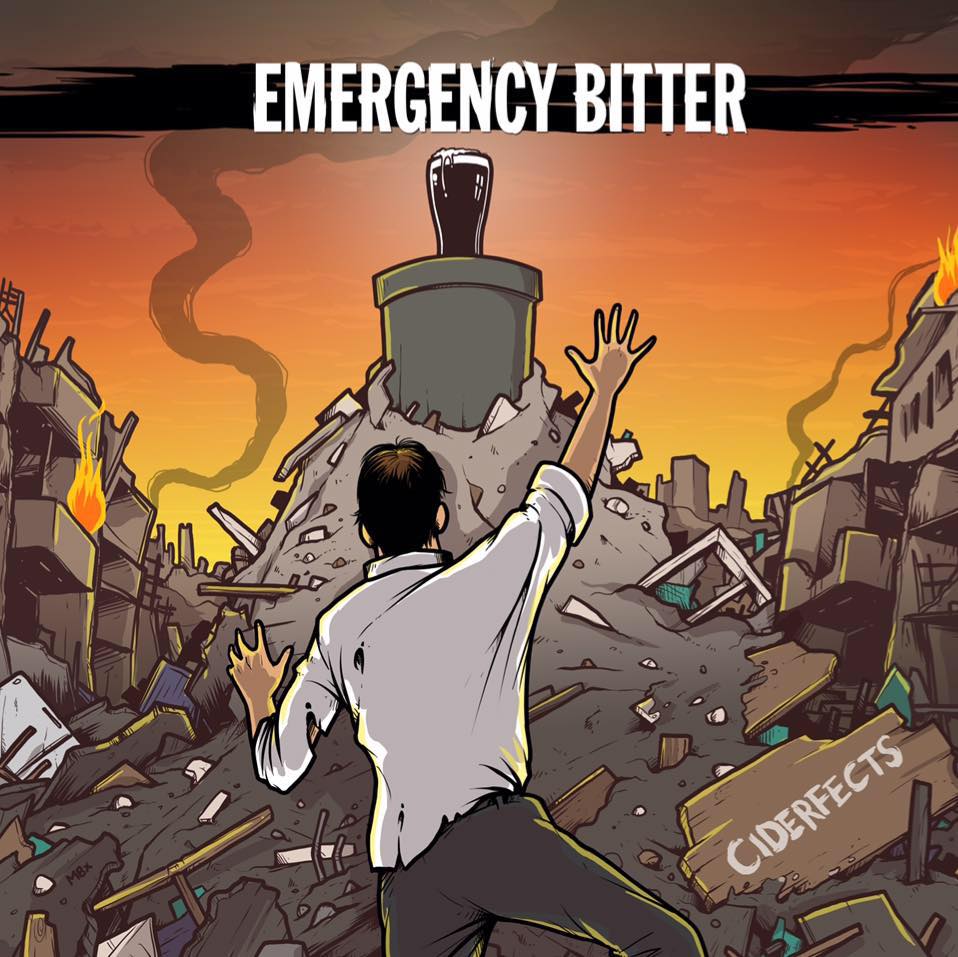 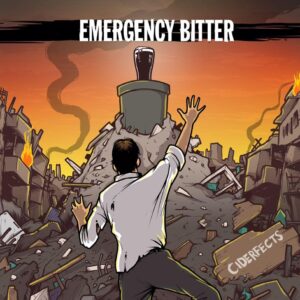 Proper Geezer Punx are Emergency Bitter.  Unpretentious, old enough to know better, in it for the fun and the beers and the camaraderie.

Its impossible to criticize them as they know the score; they worked it out eight years back;  they can play well enough to get a roomfull of pisshead punks jumping around and having fun before they go back to the daily grind on Monday morning. I’m guessing they started out doing covers and gradually starting writing their own material.  Write About What You Know -being one of punks unwritten rules.  This they do – hence the title of their first album Ciderfootballpunkrock.

It’s every bands ambition next to write a few ‘classics’, crowd-pleasers, songs people will remember – ones that will be up there with the best of ’em.   GLC, Warhead,  Banned from the Pubs….. I’m surmising this is what they want.  I’ve never met Ferret -Vocals, Joe – Guitar, Alb – Bass, Phil -Drums or Rob -Guitar, but this is the impression I get from this smartly-named and well put together album.

The opening track is probably the best – the self-explanatory Punk Rock Saved My Life, and it achieves what I imagine they set out to do.

Now, I don’t think they’ll be up for an Ivor Novello Award or the Mercury Prize – but they have ambitions which are achievable; getting higher up the bill at Rebellion and all the other smaller punk Festivals.  Getting paid for basically having a laugh and doing something they enjoy.  Seeing a load of pissed people singing your songs back atcha!    (They say critics are frustrated musicians don’t they?).

In keeping with both punk traditions -there are songs about nothing; ‘Nothing To Say’ explained with a “Cos we’ve been drinking all day” and songs about something; ‘Hate Me’ – which confronts bigotry on a one to one, face to face basis -‘If you wanna hate me then hate me.. For who I am, not what I am”.

‘Jam Generation’  seems to be about Young Tories who profess to liking the work of the Jam and the Smiths without an inkling of the sentiments and politics behind the songs.  ‘Mummys Boy’ is a punk rock attack on the rich and nepotism.

Vive Le Rock, my favourite punk rock glossy mag (he said without a trace of sarcasm) said: “It’s exactly how punk should sound – simple, raw and imperfect. (They) have delivered another anthemic album that does exactly what it says on the tin”.

It’s a a solid album, but personally I have to say that in 2017 -the way things are in the UK , bands like Emergency Bitter need to nail their colours to the mast a bit more and get angry about more specific issues.  We need good-time songs, like the closing ‘Here We Come’ – a ska-punk knees-up, but we also need to target the enemy and push the boundaries of punk rocks self-imposed limitations a bit…

You can’t help liking Emergency Bitter though, because they were never gonna make it as male models or gigolos or be the ‘new Coldplay’ -and any band who list their influences as “Punk, Cider, Vodka, and tequilla, Fried Chicken, Pizza, and Kebab. Eddie Hitler, Bender and Ralph Filthy.” and have the slogan *”Fag and a drink for a dying man daughter?” are alright by me.

For Fans Of:  The Lurkers, Menace, the Ejected, ‘Punk & Disorderly’, Bottom…

*”Fag and a drink for a dying man daughter?”  -is the catchphrase of the Nigel Planer character ‘Filthy Ralph McFilthy’ in Filthy, Rich & Catflap – the brilliant comedy series which came between The Young Ones and ‘Bottom’ – starrring Rik Mayall & Ade Edmonson….