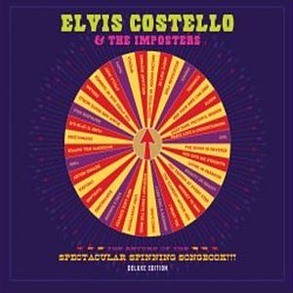 Recently, ok, March 25th 2012 to be exact (I’ve always been kind of precise), I was reminded by a Facebook friend that it was the 35th anniversary of the release of the first single by the son of a Liverpudlian dance band singer and musician (I’ve always kind of liked biographical detail). The single was ‘Less Than Zero’ (Stiff Records, Buy 11) and though the call for Mr Oswald may have been ironic, my calling was anything but and, though I didn’t know it then, Ross McManus’s son, Declan, had attracted another devotee (I’m proud of the fact I was an early adopted disciple). ‘My Aim Is True’ (Stiff SEEZ 3) was released on July 22nd 1977 and within weeks of its release I had a copy of Elvis Costello’s (for it is, of course, he) first LP (we called them that then, but now we get DVDs, of which more later).

As an avid music press purchaser from an early age, by 1977 I’d progressed from the likes of Mickey, Disco 45 and other chart lyric mags to the dirty, inky music broadsheets, alternating between Record Mirror and New Musical Express until the epochal arrival of the celebrated “hip young gunslingers”Â at the latter confirmed my allegiance and the N.M.E. became my music paper of choice for the next 30 odd years, every week scouring every word cover to cover with religious fervour. In the July of that year I started a Saturday job in Southampton’s H.M.V. Records, next to the old Check Point Cafe adjacent to downtown Bargate, and my music education began in earnest.

The seeds had already been sown by a school friend, Martin James, who, ahead of the game, had lent me some early classics: The Damned Damned x 3, The Clash , Heartbreakers L.A.M.F. The Jam In The City and”Â¦ My Aim Is True by Elvis Costello. My favourite? Back then, for a while at least, the visceral energy of the Damned held sway, but Elvis was a very close second. But my musical love affair was to be a marathon not a sprint, with the album, the label and the artist; The Man. Incredible to think now, but just a few weeks earlier, I’d still been listening to E.L.O., Pilot and other groovy chart toppers! But the Punk/New Wave revolution swept them away in the time it took for Alan “Fluff”Â Freeman to count down 10 to 1.

The backing band on MAIT were Clover, who later went on to form the basis of Huey Lewis and the News, and the album was the first of 5 produced by Nick Lowe, who’s currently enjoying success after many years in bands, writing and producing for others. The classic “(What’s So Funny ‘Bout) Peace Love and Understanding”Â, was an early cover by Elvis, usually as an end of set crowd pleaser and was also covered in 1990 by Curtis Stigers for the Bodyguard Soundtrack, which has kept Nick in guitar strings ever since. M.A.I.T was recorded in 24 hours, though those 24 hours were spread over several late night sessions as 1976 turned into 1977, the classic Punk Years. The Attractions were formed a little later in 77 remaining a tight unit until a doubting Bruce Thomas contributed to their split in the mid 80s. While every Elvis album was greeted with joy unconfined and only a few don’t qualify as masterpieces, this debut release will always be my favourite.

Thirty five years ago, my music listening and purchasing taste were changed forever, by an angry young man with Buddy Holly looks and grown up lyrics. Songs with tricky word play and rhyming couplets had me hanging onto every verse, each release up to Mighty Like A Rose was purchased as close to release date as possible, on vinyl of course, and played until favourites were picked and future singles predicted. During this time Elvis Costello had played a little country, stax/soul, with an orchestra, and even Taking Care of Business one time Elvis Presleys backing band for King of America, followed quickly by Blood and Chocolate the last Attractions album, Spike and Mighty Like A Rose were both Elvis Costello solo outings every release since has been religiously purchased but not scrutinized with the same intensity. The collaborations, the soundtracks, acting work, the Brodsky Quartet and brief dalliance with Deutsche Grammophon have all been equally loved and endured.

At last Elvis Costello has returned to the stage with his celebrated Spinning Wheel tour and now comes the definitive document of this tour: ‘The Return of the Spectacular Spinning Songbook!!!’, recorded over a 2-night stand at The Wiltern Theatre in Los Angeles on May 11th and 12th, 2011. Costello once again allowed his set-list to be chosen by ‘The Spectacular Spinning Songbook’, a huge game-show type wheel spun by chosen fans and featuring songs from his latest critically acclaimed release ‘National Ransom’ 2010, plus new renditions of hits, rarities and very unique covers. This record of the tour, whether a fan or occasional gig goer, should not be missed and the DVD and CD released in conjunction are a compulsory purchase for me as much now as a fifty something as it was as a fifteen year old and reminder that Elvis Costello is still the consummate entertainer and his eye as sharp as his mind ”â€œ never were there truer words in an album title; his aim is and always was scrupulously honest. Fresh, fierce and funky, still after 35 years, “lets talk about the future now we’ve put the past away”Â, well not really put away, because that first ever single still resonates. This DVD, like Elvis’ career is more, so much, much more than zero. 9 out of 10.

The full track listing is:
1) I Hope You’re Happy Now
2) Heart of The City
3) Mystery Dance
4) Radio Radio
5) Clubland
6) God Give Me Strength
7) Tear Off Your Own Head (It’s A Doll Revolution) ”â€œ ft. Susanna Hoffs of The Bangles
8) Out Of Time
9) I Want You
10) Everyday I Write The Book
11) Stella Hurt
12) A Slow Drag With Josephine
13) Jimmie Standing In The Rain
14) Alison
15) Earthbound
16) (What’s So Funny ”ËœBout) Peace, Love And Understanding
Bonus Tracks:
Uncomplicated
Watching The Detectives
Monkey To Man