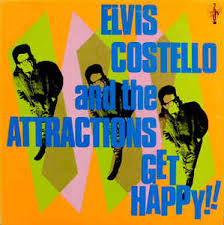 On 15th February, Get Happy by Elvis Costello & The Attractions celebrates its 40th birthday.  Gordon Rutherford tells Louder Than War why it is worth revisiting.

It’s hard to believe that Get Happy, that iconic slice of vinyl by Elvis Costello & The Attractions, celebrates its fortieth birthday this Saturday.  It’s an album that is so special to me for a number of reasons.  I remember the day I bought it with my own hard-earned cash, accumulated from delivering newspapers seven days a week.  Whilst I no longer deliver papers, I do still listen to Get Happy, not for nostalgic reasons but simply by virtue of its utter brilliance.

It’s fair to say that it’s not Costello’s most technically accomplished work.  That epithet probably belongs to King of America.  Nor is it his finest collection of songs.  That would be Imperial Bedroom or Trust.  But it is his most joyous, energetic, frantic, idiosyncratic, completely impossible body of work.

I saw Costello & the Attractions live for the first time shortly after Get Happy’s release.  The thing I remember most was the absence of any breaks in between songs.  They played for a frenetic two hours, lurching from one song to the next without missing a beat.  By the end of the show, everyone, artists and audience alike, was exhausted.  Of all Costello albums, Get Happy is the one that most emulates that experience.

Before we get to the music (and, of course, the lyrics) we absolutely must address the little quirks that make this album so differentiated and so special.  Firstly, we have the number of tracks. Twenty.  On a single vinyl album.  This was breaking all of the rules.  Albums were forty minutes long and comprised ten tracks (sometimes twelve).  To produce an album with twenty tracks meant a massive compromise when it came to sound quality.  It could only be achieved (allegedly) by ‘groove cramming’, a technique that results in significant deterioration in sound quality.  To be fair, the longest song on the album (Riot Act) clocked in at just over three and a half minutes with thirteen tracks closing in under two and a half minutes.  This wasn’t Tales From Topographic Oceans.  Despite that, to put people’s minds at rest, producer, Nick Lowe, composed a missive for the album’s back cover that basically assured the listener that sound quality was not blighted in any way by the sheer volume of songs.  I’m no engineer, but to my ears it sounds as good as anything else produced in the era.

Then we have the confusion over what exactly is side one and what is side two.  On the sleeve, it states that side one is the one that kicks off with Sam & Dave’s I Can’t Stand Up For Falling Down, with side two commencing with Love for Tender.  Take the vinyl from its sleeve, however, and the former introduces side two with Love for Tender setting the tone on side one.  Most confusing. For what it’s worth, I have always gone with the order on the sleeve.

The third quirk is the Barney Bubbles designed cover.   It has a real sixties retro feel to it, but that in itself is not particularly unusual.  No, what makes you stop and think twice is the ‘ring wear’ on both front and back cover.  As many people will know, this occurs over a long period of time if, apparently, you don’t keep your vinyl in pristine conditions. Originally, when I purchased Get Happy, I was convinced that the cover was damaged.  Between that and the side one/side two confusion, there’s a lot to think about before you even get close to the music.

The final little interesting foible worth mentioning is the fact that the album was recorded in the Netherlands with the exception of one track.  Yup, you guessed it…New Amsterdam.

It’s a project littered with mini-subterfuges, all of which serve to make the whole experience much more fun. As an aside, those little things illustrate just how significant physical slabs of music (i.e. vinyl) are.  Listen to Get Happy digitally and all of the above will drift past you without impact or relevance and that would be a massive shame.

All of these little nick-nicks make Get Happy an interesting album.  But it’s the music that makes it special.  Between 1977 and 1986, Costello (with or without The Attractions) released no fewer than eleven albums.  He was prolific.  He was also incredibly versatile.  Those eleven albums are all quite different, from the refined punk of This Year’s Model to the biting political commentary of Armed Forces; from the roots Americana of King of America to the shimmering sophistication of Imperial Bedroom. Hell, there’s even a country album (Almost Blue).  Get Happy is his homage to vintage R&B.  To Motown, Sun, Stax and everything in-between. Although, despite that, it still sounds edgy, uncompromising and claustrophobic in its intensity.

It has been suggested that the reason for the clearly black influenced theme of Get Happy stems from an argument that occurred whilst Costello was touring the US in 1979.  A very drunk Costello vociferously told Stephen Stills and Bonnie Bramlett just how bad American music was.  Worse, he descended down the most regrettable avenue possible when he started to racially slur James Brown and Ray Charles.  It’s an incident about which Costello has always felt great remorse, apologising on many occasions.  It’s something that could have ended his career there and then.  Indeed, on Get Happy’s Riot Act, he sang “But it doesn’t look like I’m gonna be around much anymore”.  But he was and he returned twelve months later with Get Happy.  People have surmised that the events are connected and that Get Happy is a homage paid in contrition. Costello, however, has since denied that, stating that “I simply went back to work and relied on instinct”.

As the reader, you will undoubtedly be delighted that I’m not about to dissect twenty songs in precise detail.  What I will say is that whoever put the running order together, whether it was Costello or Nick Lowe, did an incredible job. Because the journey through the twenty tracks is akin to being on the world’s most thrilling rollercoaster.  For example, you go from the incredible, moving ascent of Clowntime is Over, take a breath during the folksy New Amsterdam, before descending crazily with High Fidelity.  And that’s how it goes.  Relentlessly, the jittery Black and White World, segues into the groove of Five Gears in Reverse.  The onslaught suddenly shifts with the beautifully bass-driven skiffle of B Movie, a song with such gorgeous changes in tempo and rhythm that it literally takes the breath away.

King Horse powers through everything in its path, Men Called Uncle is Costello at his lyrical finest, all biting satire and knowing puns.  Beaten to the Punch is similar, just more frenetic.  As you would expect, Get Happy’s lyrics are quite wonderful.  They manage to be poignant and thought provoking throughout.  His wordplay is, as always, unrivaled.

The more you listen, the more you realise that these aren’t just songs.  They are short stories, little vignettes that reflect life and all of its tragedies perfectly.  And you understand that almost all of the songs are under three minutes because they don’t need to be any longer.  They deliver all that is necessary in that minuscule timeframe.  Anything else would just be a waste.

For me, the finest moment on the album comes with Riot Act.  A song that many have assumed to be about the racism scandal, Costello sings, “You can read me the riot act/ You can make me a matter of fact/ Or a villain in a million/ A slip of the tongue is gonna keep me civilian”.   It is a wonderful, beautiful ballad that is the perfect closer to the album (although it may not be the closer depending upon what you believe side two is).

Of course, no conversation about Costello’s work would be complete without mention of The Attractions.  They are to Costello what The Bad Seeds are to Nick Cave.  They take the songwriter’s work and develop and enhance it in the most unique and compelling way.  Bruce Thomas’s bass playing is at the core of the whole album.  It drives the music on and you get a sense that the more R&B themed approach really suited his supple, fluid style.  His bass lines meander gorgeously, serving the music entirely.  The other half of the rhythm section, drummer Pete Thomas, is equally vital, pinning down the music with perfect timing and slashing fills.  Then, of course, you have the driving keyboards of Steve Nieve.

In summing up. Get Happy is uplifting, energetic and joyous.  It makes you want to throw weird shapes and dance around the house.  It makes you laugh and cry and throw yourself on the floor.  It paints pictures in your head.  It’s like an amphetamine, the way it gets into your bloodstream and takes control of your senses.

It’s forty on the 15th February 2020.  And that’s surely one birthday worth celebrating.

Gordon Rutherford is an author and musician. He can be found via Twitter @R11Gordon