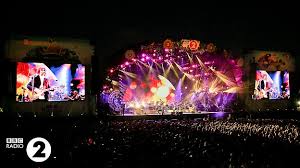 BBC 2 radio day in the park

This bit is by John Robb

The whole concept of ‘guilty pleasure’ has always appeared rather foolish to us.

The greatest thing about music is the way that is defies any notion of that cursed concept of cool and those hipsters and anonymous online commencers with their hipper than thou attitude seem to be the most tragic of people.

ELO are the perfect example of this, they may have looked a bit rubbish and they may have been accused of being Beatles- lite but, damn, they didn’t half write some really great songs- songs so good that 28 years later since their last gig they really stand the test of time. They may have looked like satin wrapped gonks but even that had it’s own kind of defiant cool as they defied the music press like some kind of seventies version of Kasabian- midland boys with their own musical journey far away from the stern arbitrators of taste.

They appeared in the middle of glam rock as an awkward looking vehicle for the genius Roy Wood who combined a taste for classical with rock n roll. Roy Wood was the great songwriter in the Move whose bubblegum pop with a trippy tinge had seen some classic songs in the late sixties and his brief stint at the helm of ELO set their good ship off with a quite brilliant template of picking up where the late sixties Beatles ‘had left off…’ First single 10538 Overture was a prime example of this and follow up singles like Showdown and Ma Ma Ma Belle were great examples of a very british rock n roll.

Being a Brummie Roy was not a bragging type and when he handed over the reigns ager a couple of years to fellow midlander and band member Jeff Lynne it didn’t make any difference as the band broke massive in the USA and then in the mid seventies on their home turf with hits like the complex and quite stunning Mr Blue Sky and the anthemically genius Livin’ Thing. There were number one albums, stadium gigs, a wholesale American Invasion where they were mistaken for the Beatles by our transatlantic cousins still in love with the fab four  and gigs with flying saucers and those satin flares that ignored the punk explosion.

These are all reasons to love Jeff Lynne- a thoroughly decent chap with a great songwriting talent- he may not have ad the Elvis charisma but he didn’t need to and like all the best musicians he ignored fashion and got on with creating. He got so good at the Beatles thing that dear old George Harrison asked him to produce and co songwrite with him in the last years of his life and the pair of them jammed George Formby songs on ukuleles at George succumbed to the big C.

The great thing about time is that all those imagined sins and terrified misconceptions all wilt in the end and the last few years have seen grudging respect for ELO slowly turn into an outpouring of love. Jeff Lynne is in danger of being turned into national treasure and hopefully Roy Wood will get his long deserved recognition as well- those damn Brummies are always too nice for their own good.

This bit is by Ian Mcnabb

‘ELO have never been a cool band. Punk pretty much did for them and they disappeared from most people’s radar a very long time ago. However, the songs have endured and this performance on Sunday evening to 50,000 people in Hyde park was a revelation. Only Jeff Lynne and Richard Tandy survive from the original line up but I don’t think anybody was too bothered. For seventy five minutes Jeff and his friends plus a full orchestra thrilled all in attendance and the rest of us watching on TV. Every tune they played except one was a hit single. Jeff Lynne seemed genuinely taken aback at the rapturous response from the audience. The songs have stood the test of time and the dodgy perms and beards upset no one anymore. Rumour has it that this show was a tester and if we and they enjoyed it, a full tour could be on the cards. Well….everyone was happy so book those dates chaps. They will come. You have to doff your cap to a man who spent his career trying to sound like the Beatles and then produced the Beatles comeback record and managed to make them sound like ELO. Welcome back Jeff.