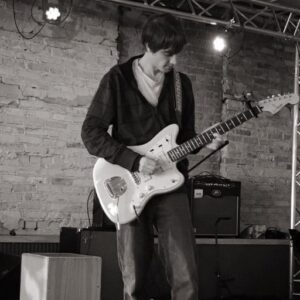 Elmer and the Ceramic Trees

Immediatlely from the first track ‘Two Immortals’, you know you are onto something brilliant with this act. Big syths coming from a field recording start, changes into Cure esque dramatic and loud all encompassing orchestral electronica. A massive start.

Follow up ‘Everyone’s afraid these days’ has a gentle electronic beat with vocals that are very Ian Curtis like. They turn into blasts of pained vocals and noise and segue gently into ‘Wilderness’. Ominous sounds of thunder and dark clouds envelope this next track. Gentle guitars and vocals gradually come in and build up an up to a dramatic crescendo of noise and lyrics of “gonna make a god out of you”.

‘View from a Beach’ has a lovely throbbing electronica and euphoric analog synth that is gorgeously minimalist in its delivery and reminds one of Suicide. ‘To dream is just as good’ quickly follows and it’s tribal drums John Carpenter esque analogue synth again envelopes the lyrical delivery and builds the noise up an up to a nice crescendo.

‘The waking hour’ is a gorgeous instrumental that builds and builds with a very disconcerting recording of bees at the end.

I guess you could accuse Haas of living in the past somewhat, but with Elma and the Ceramics, he has proved that he has the ability to graze upon this fertile ground, as well as setting himself up as a purveyor of sounds and tunes that are 80’s influenced, but are firmly rooted in the electronica of now.

This is essential listening if you are into The Cure, Ultra Vivid Scene or The Jesus and Mary Chain. Playful noise mixed with heartfelt vocals and lyrics combine to create gorgeous timeless tunes. Just great stuff.

But i do have to say. Music aside. This is the absolutely last time that i am reviewing a band that calls themselves a name and then puts a ‘and the’ after it with a ‘thing’ at the end. Enough with it all folks!

Elma and the Ceramic Trees can be found via his Bandcamp and he tweets as @CeramicTrees.