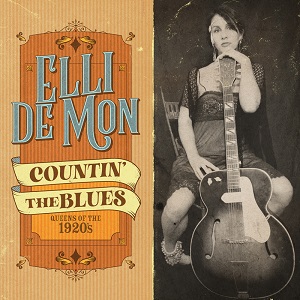 Italian one-woman blues-garage band salutes the queens of the blues with an inspired selection of interpretations on her sixth album.

Lately, there has been an influx of tribute albums, artists paying their respects to the bands that formed their own styles. From well-known names like Gang Of Four, to underground bands like Subsonics, reverence and homage seem to be the order of the day. To that list, we can now add Italian blues-garage singer Elli de Mon, who, on her new album Countin’ The Blues, shares her versions of some of the great female blues artists of the 1920s.

She starts of the record with a fantastic version of Ma Rainey’s Prove It On Me Blues, her slide guitar work winding out over a stomping rhythm, injected with a full distorted grit that suits the song perfectly. It’s a dose of dirt that lends itself well when she takes on Lucille Bogan’s Shave ‘Em Dry. I can only but imagine the shock and horror on the face of a young Mary Whitehouse as a teenager hearing the lyrics coming from the speakers. On this version, the fuzz is pushed through the floor to create a dense danger over which de Mon rasps howls and wails. She’s in pure Kills territory and it’s fantastic.

While her guitar work lends itself excellently to the songs, it’s often her voice that is the true star. She uses it to great effect on the introduction to Bessie Smith’s Blue Spirit Blues, substituting the original’s haunting piano line with a low hushed hum and ghostly harmonies, acapella until the menacing guitar seeps in. The song builds slowly, the intensity gradually increasing until it’s bringing down the house. On Victoria Spivey’s Dope Head Blues she brings in a create sitar line and backing, creating something completely otherworldly and captivating.

While the first side of the album takes the inspiration of these Blues queens and shifts their work squarely into the fuzzed-out darkness of dirty garage, de Mon knows that, in showing respect to these legends, she must also take the songs at times for what they were. In that vein, the second side sees her sticking much closer to the original styles of her chosen covers. The choice to do so serves as a perfect reminder that she herself does in no way need to hide her talent within the distortion and that, stripped back to an acoustic guitar, her talent can still make an incredible impact.

Her arpeggio fingerpicking on Elizabeth Cotton’s Freight Train is sublime, as is her voice, sweet and perfect with some wonderful tumbling phrasing. She does a real spirited sliding version of Lottie Kimbrough’s Wayward Girl Blues and, while it may have been popularised more by Led Zeppelin, her version of Memphis Minnie’s When The Levee Breaks surpasses that driving rock version through retaining the original’s sensibility before closing out with a wonderful version of Betha ‘Chippie’ Hill’s Trouble In Mind. Those who go for the vinyl version will also get a hypnotic version of Geeshie Wiley’s Last Kind Words. It’s certainly more in the style of the first half of the record, breathing a whole new lease of life into the song, stripped of virtually all recognisability.

Whether reinvented and reworked or sticking close to the originals, de Mon manages to bring a new life to the songs on Countin’ The Blues, one that will no doubt bring these classics to a whole new audience.