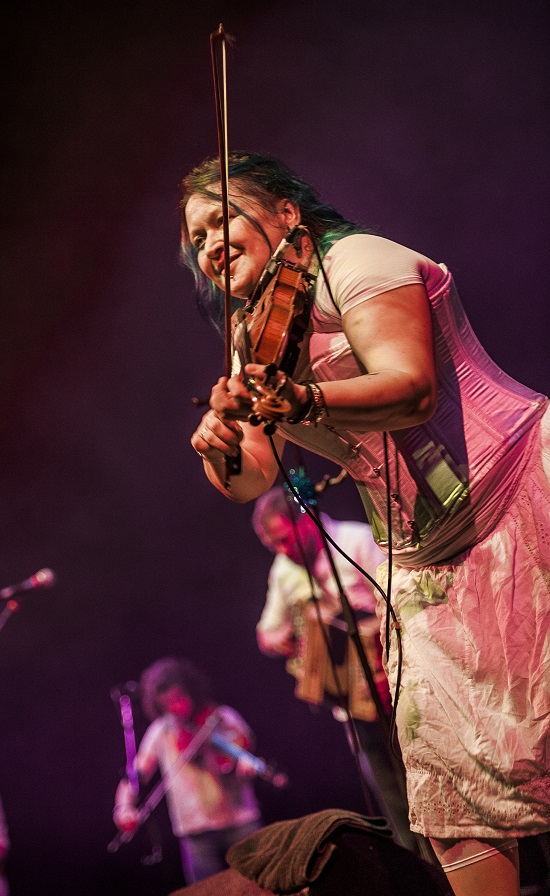 Exactly one year and one month on from their appearance in the cavernous concert room at the RNCM, Eliza Carthy and her eleven piece Wayward Band return in the ever so lightly more snug but packed RNCM Theatre for another pre Christmas bout of big band folk.

Not our Eliza of course, but one of the central characters of Good Morning Mr Walker, the calypso romp where the “we’re not massive fans of the happy ones” claim gets  shelved for a moment – or the first of  several. The carefully choreographed  start when the band leap up in unison and career off into what has always been an undoubted highlight of the live performances of this group of musician was one that also highlighted a gig of extremes . The spectrum was generously stretched;  the musical recreation of the smoky atmosphere of a Flanders trench on a stunning I Wish That The Wars Were All Over that combined with  You Know Me, punctuated by Eliza’s little speech around the theme of British Values, generosity and hospitality, provided the centrepoint of a set that ran the gamut.

Then there was the one described as  “the happiest we know” for Gallant Hussar where seven voices combined in a rich coat to accompany a handclapped march and the drama of The Sea in its  big band arrangement  rather than the stark field recording that appears on Stick In The Wheel’s From Here collection.

Despite an audience who seemed happy to sit back respectfully and soak it all in, the  instrumental frolics saw the band careering literally all over the place, the regular  foils of long time collaborator Saul Rose and guitarist David Delarre giving way to new chief merry maker, Sam Sweeney; one moment leading his string section in a hokey cokey across the stage, the next  indulging in his trademark spring heeled gymnastics. He’s recovered well – this time last year he was well under the weather, this year he’s full of beans, end of tour frenzy taking over perhaps, leading him into a massive leap cum knee slide off the stage into the front rows – ouch.

While Love Lane developed into a free for all jamboree, those who remained resolutely seated gave way to a trickle that opened the floodgates  who were more than keen to let down their hair, at the designated spaces to side of the stage naturally. The penultimate gig of a jaunt that’s taken them tround the UK, they reached Manchester gig fit and in fine fettle. People danced in the aisles, adrenaline junkie musicians covered every square inch of the stage like an old style midfielder covers every blade of grass, all to an accompaniment  of brass, drums and strings – did we mention this was a folk gig?