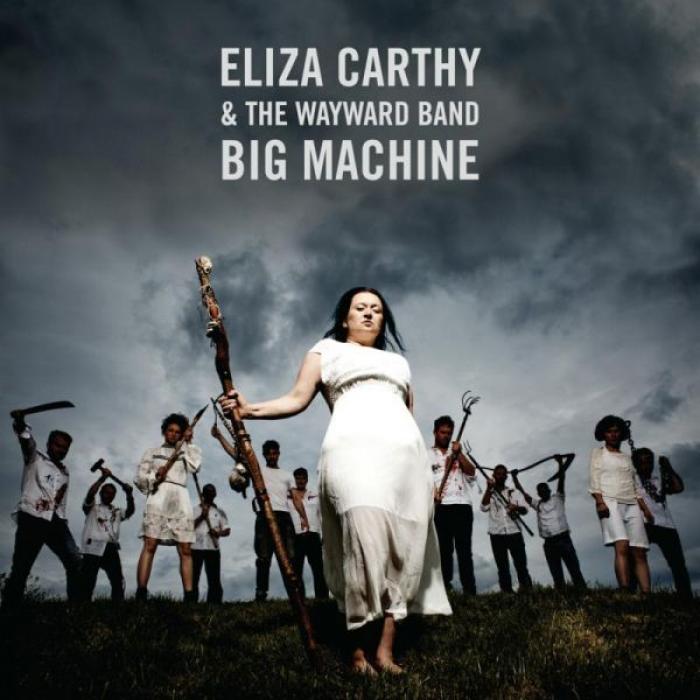 Never one to stand still or contentedly  plough the same furrow, Eliza Carthy epitomises progressive folk. Never predictable…well very rarely,  as for once, she delivers what we all hoped for and possibly expected. ‘Big Machine’ rolls up marking  the long awaited and very welcome recorded work from Eliza Carthy & The Wayward band –   a band project she’s occasionally courted for the past few years.

The live incarnation of the Eliza Carthy & The Wayward Band has been active since 2013; an outfit assembled to celebrate her twenty years in the biz and delivering some incendiary shows which simply had to continue to ride the wave of its unstoppable force. It’s some  way from her last collaboration on the distorted guitar and blues drenched   stripped back combo  she formed with American musicologist  Tim Eriksen.  Her expanded Wayward Band  line up isn’t far short of an all star band;  featuring the instantly familiar names  from the folk world of Saul Rose, David Delarre, Sam Sweeney, Beth Porter , Lucy Farrell, Barnaby Stradling  not to mention a brass pairing of Yenyen Toulouse and Nick Malcolm.

They have duly evolved into what it says on the tin. A big machine, appearing as  marauding heathen brigands, emerging from the backdrop of an overcast sky  led by a corseted princess warrior. Marching forth, taking no prisoners, looting and pillaging the songbooks; but does the studio dampen down the exuberance and vitality of the live experience…thankfully not. No dampening at all as topics shift from whales to the contemporary issue of immigration  given a fresh twist from the viewpoint of hospitality, to female serial killers, women in industry, domestic abuse and the woman’s lot in general.  Oh, and custard poisoning. Chetham’s library in Manchester also proved to be  grounds rich for picking, a timely raid of the broadside ballad collection.

So a little drama to begin with as ‘Fade & Fall’ a touch of Bond theme and ‘Devil In The Woman’ has an  Oliver Twist Victorian workhouse singalong feel. Ewan MacColl’s ‘The Fitter’s Song’, a radio ballad about the building of the M1 gets the big band feel as New Orleans jazz and  r&b combine with rollicking rhythms  and while any twelve  piece big band playing folk flavoured songs and tunes is going to get compared with the late Bellowhead,  ‘Jack Warrell’s – Love Lane’ is as close as you’ll get. A mesmerising full band romp, firing on all cylinders through a brass and string driven piece introduced by a slowly building vocal blend (presumably the ‘Jack Warrell’s’ excerpt) it meets the challenge of capturing the live energy. As does the  wild gypsy fiddle of ‘Mrs Dyer The Baby Farmer’ that accompanies a chilling tale executed  with a rare passion and vibrancy.

Damien Dempsey thrown in at the deep end on ‘I Wish That The Wars Were All Over’  a torrid delivery over a bubbling sequencer rather than the usual melodeon duet with Saul Rose. Recorded live at Real World it’s a landmark piece and the best of the numbers where the pace  slows down;  ‘You Know Me’, featuring MC Dizraeli, plods along in a more mid paced mainstream dub and ‘Hug You Like A Mountain’ features Teddy (son of Richard) Thompson take on a more accessible although no less intense  feel and give the chance for a breather amidst the fury. Of course they provide further evidence that Eliza and her acolytes continue to be rarely anything less than a set of challenging, thought provoking and  out of the box musicians.

She is  also on Facebook  and tweets  as @elizacarthy