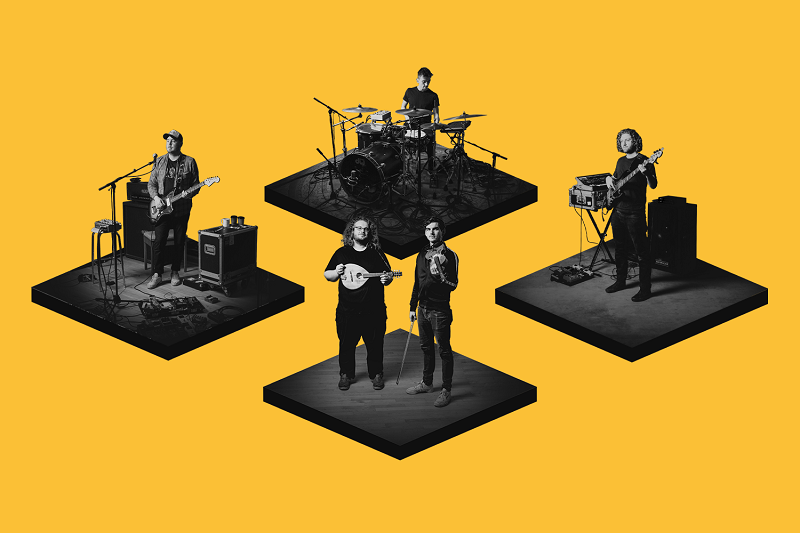 ELEPHANT SESSIONS: WHAT MAKES YOU

Rolling Stone magazine reckons these guys from the Scottish Highlands use their instruments like weapons to destroy clichés…. Award-nominated and award-winning benefactors of the Belhaven Brewery Bursary (one that actually matches the amount from winning the Mercury prize…), we present a new album from Elephant Sessions.

Quickly dodging any Braveheart analogies, having witnessed Elephant Sessions whip up a storm or two on the festival circuit, you can get where RS is coming from.  Instead, let’s namecheck AC/DC and their “aye-aye-oh, shake your foundations” line or maybe Dylan’s “soon shake your windows and rattle your walls” for, of course,  the times  continue to be a-changin’. And the times indeed are a-changin’, as a constant stream of bright young folk descend from all parts of the UK and if truth be told, from around the world, in the furtherment of joyous and vibrant folk tradition.

With a rock solid guitar, bass and drums backline, fiddle and mandolin up front plus a concession to some dance beats, and you have the definition of indie folk. Now, having seen them play live and then had the experience of their All We Have Is Now album and feeling a tinge of it being ‘not quite the same’, the jury may have been out on whether the live experience transfers to the recorded experience. What Makes You comfortingly bridges that gap as their respectful reinvention of the genre takes a firmer grip.

So we get a thorough helping of what could easily pass for disco funk on We Out  Here Now as Elephant Sessions forsake the festival circuit and go Folk Rave Ibiza ’19, but here’s a hint. Rather than wait for the sequence to turn its natural course, use your handy CD scanner button to skip straight to the two parts of Riverview; the haunting air of the first part yielding to what in rock circles would be termed ‘a monster riff’ and a chance to wave your arms in the air and be daft. Feel refreshed and imbibed and ready to take in What Makes You in the order as intended.

The guys stand as living proof that doing a degree can actually have a useful outcome – a round of applause for Newcastle Uni’s folk music course. The final affirmation of this vibrant band’s arrival though must come with the fact that they’ve attained the sort of status that affords them their own brewed and branded beer – Elephant Sessions Ale. If it’s good enough for Iron Maiden and Motorhead, what else could you need?

Watch  the official video for What Makes You here: